Why does pasta really boil over?

I was making pasta, and I noticed the pasta boiling over. I thought about it some more, and I realized I had no idea why this was happening. When the lid is on, the foam rises. When the lid is off, the foam dies back. Clearly there's some surfactant at work allowing bubbles to form, and the bubbles are mostly full of steam. If you remove the lid, they cool and condense down to a tiny size. This article is honestly just not specific enough. Why is the starch important?(It also happens with potatoes) How does a polysaccharide, a hydrophilic molecule, become a surfactant(if indeed it does)? Is it phospholipids from the cells that became pasta? Do starch molecules form a polymer and trap steam underneath like a balloon? Is it some kind of hybrid where bubbles are stabilized by viscosity? What's going on here?

This answer is all over the internet but doesn't make any sense to me. You need less surface tension for bubbles, surely?

I considered putting this on seasoned advice, but I'm not interested in how to prevent boil-over(or really any practical results), and the supplied answer there lacks scientific rigor.

The starch forms a loosely bonded network that traps water vapor and air into a foamy mass, which expands rapidly as it heats up.

Starch is made of glucose polymers (amylopectin is one of them, shown here): 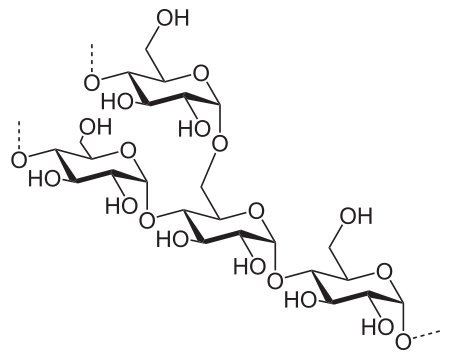 Some of the chains are branched, some are linear, but they all have $\ce{-OH}$ groups which can form hydrogen bonds with each other.

Let's follow some starch molecules through the process and see what happens. In the beginning, the starch is dehydrated and tightly compacted - the chains are lined up in nice orderly structures with no water or air between them, maximizing the hydrogen bonds between starch polymers: 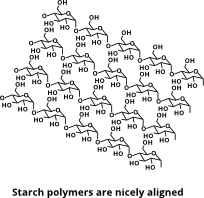 As the water heats up (or as you let the pasta soak), water molecules begin to "invade" the tightly packed polymer chains, forming their own hydrogen bonds with the starch: 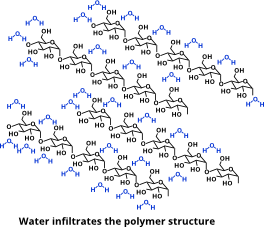 Soon, the polymer chains are completely surrounded by water, and are free to move in solution (they have dissolved): 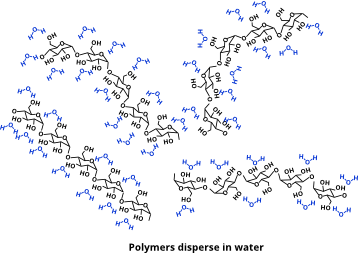 However, the water/starch solution is not completely uniform. In the middle of the pot of water, the concentration of starch is low compared to water. There are lots and lots of water molecules available to surround the starch chains and to keep them apart. Near the surface, when the water is boiling, the water molecules escape as vapor. This means that near the surface, the local concentration of starch increases. It increases so much as the water continues to boil, that the starch can collapse back in on itself and hydrogen bond to other starch molecules again. However, this time the orderly structure is broken and there is too much thermal motion to line up. Instead, they form a loosely packed network of molecules connected by hydrogen bonds and surrounding little pockets of water and air (bubbles): 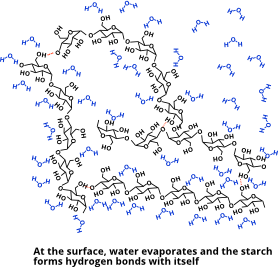 This network is very weak, but it is strong enough to temporarily trap the air as it expands due to heating - thus, the bubbles puff up and a rapidly growing foam forms. Since they are very weak, it doesn't take much to disrupt them. Some oil in the water will inhibit the bubbles from breaking the surface as easily, and a wooden spoon across the top will break the network mechanically as soon as it touches it.

Many biomolecules will form these types of networks under different conditions. For example, gelatin is a protein (amino acid polymer) that will form elastic hydrogen-bonded networks in hot water. As the gelatin-water mixture cools, the gel solidifies, trapping the water inside to form what is called a sol-gel, or more specifically, a hydrogel.

Gluten in wheat is another example, although in this case the bonds are disulfide bonds. Gluten networks are stronger than hydrogen-bonded polysaccharide networks, and are responsible for the elasticity of bread (and of pasta).

But, hopefully you get the idea!

This isn't really a biology question I don't think...

As a chemist I can tell you that the rough surface of the pasta does tend to make it produce boiling over. The same can be produced with stones or wood or nearly any rough surface. Chemists use little chips of alumina or some other mineral to prevent over boiling in fact.

If you look at a sealed soda bottle you can see the same effect. Its the same scenario - in this case CO2 rather than steam is ready to come out of supersaturated liquid, but won't unless there is a Bubbles are forming at the plastic surface inside when you open the cap. If you see a stream of bubbles forming within the liquid they are always nucleating from a speck of dust or some other tiny bit of solid floating around.

The surface of mentos candy is particularly good at getting bubbles to form. I'd bet that if you dropped mentos into boiling water, at least until the mentos dissolved you'd see a bit more bubbling than pasta. I don't advise you to do this, its just a thought experiment.

But there is something you can do to prevent pasta from boiling over! Sorry for including this, but cooks are always using too much energy when cooking and its wasteful. When the water starts boiling you can turn down the heat and put a lid on the pot. Usually putting the burner on the lowest setting is enough. This lowers the amount of steam that is supercritical in the water and fewer steam bubbles will form. This saves energy too, even though the temperature of the water is the same (boiling water is always about 100 deg C), it lowers the amount of supercritical steam in the water.

You can regard the starch particles in the boiling water as some kind of impurity, dirt. Dirt always accumulates at phase boundaries, because this saves surface energy. If there's a surface already, might als well put the dirt there, you only need half as much additional surface in your main phases then. (Hence the use of surfactants as detergents: The surface tension/energy is lowered so much that the dirt can leave the surfaces.)

So the interfaces in the bubbles are full of starch, which stabilises them (see other answer, H-Bonds etc.). They don't mind about the steel or glass surface of your pot and lid, because those are wet and full of starch, too. What kills the bubbles is cold and dry air, which they don't see before they've raised the lid and spilled all over.

Not the answer you're looking for? Browse other questions tagged everyday-chemistry food-chemistry or ask your own question.

6
Why does sweetening milk need less sugar as compared to tea?
8
Why does pasta become sticky after being cooked?
5
Why does water boil vegetables, but oil does not?
15
Why does paper turn yellow over time?
3
Why does soda explode if artificial sweetener or other powders are added?
43
Why does whipped cream use nitrous oxide instead of nitrogen gas?
2
Why does the outside of a plastic cooking oil bottle get sticky over time?
9
Why does lavender oil dissolve plastic?
7
Are food calorie values really integers?