What are the reaction products in my dishwasher from a steel colander?

In my dishwasher I noticed that a steel colander and a coffee maker (the Moka Pot) both became discolored after being in the dishwasher. The metal is clearly reacting with something. They aren't made of aluminum (I don't think) and I've never seen this reaction before when I do dishes in the sink.

To clarify: the metal on my coffee pot and the colander was relatively smooth and shiny, and then after they were in the dishwasher they became grayer, and the texture was clearly rougher. That said, i was able to remove the discoloration with a Scotch-brite plastic pot scrubber sponge or Brillo pad, with a little elbow grease.

So, the chemicals I saw on the back of my dishwashing liquid were:

NaCl, Na$_{2}$SO$_{4}$, Citric Acid, Na$_{2}$CO$_{3}$, Sodium percarbonate, sodium silicate and a couple of organics (it says enzymes, but I don't know how much of that is marketing hype). I looked up the rinse aid (it's Finish brand) and I came up with alcohol ethoxylate, sodium polycarboxylate, sodium cumene sulfonate and tetrasodium EDTA, Methylisothiazolinone and methylchloroisothiazolinone, and CI Acid Blue dye.

I do not know the xact metal composition of my colander or coffee pot, though I suspect it's is stainless steel I don't know which particular type and what the exact mix of carbon, chromium, etc. is. I can say that the colander is one that is quite old; it's age is measured in decades. The coffeepot not so much; I got that maybe a decade ago? At least that. Both are made of a gray steel that has a slight "rough" feel; it's not the super-shiny modern variety. The Colander in particular seems a type of metal I recall being quite common with cheaper kitchen stuff in the 70s and 80s.

In any case, I wanted to know what the following might be: -- The reaction products of the dishwashing chemicals dissolved in the water; clearly there is something going on

-- If I need be concerned about toxicity, since this is something that touches food. I would assume there is less of an issue if I scrub the discoloration off. And it's not likely to be in concentrations that are harmful one-off, but why ingest weird stuff if you don't have to and all that.

Any insights are appreciated; this is something I was rather curious about (and may make a good demo for a chemistry class).

ETA: In the images you can see the darker gray on the metal -- that was the discoloration.

ETA II: apropos of blacksmith37 's comment/ answer I checked if there was any magnetism and the fridge magnet does not stick so it's either aluminum or a steel that is non-magnetic. 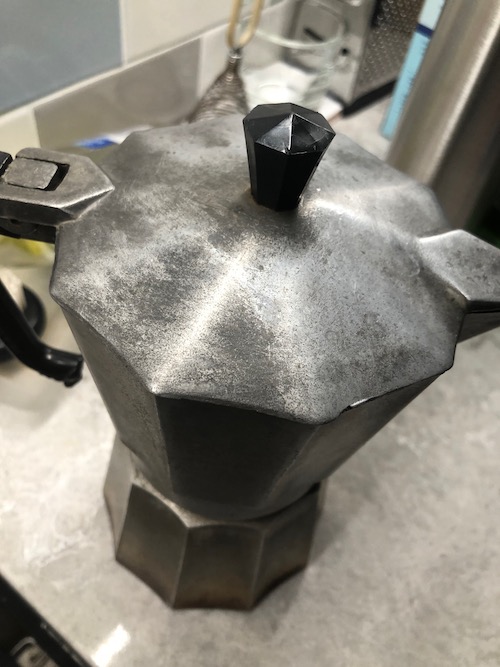 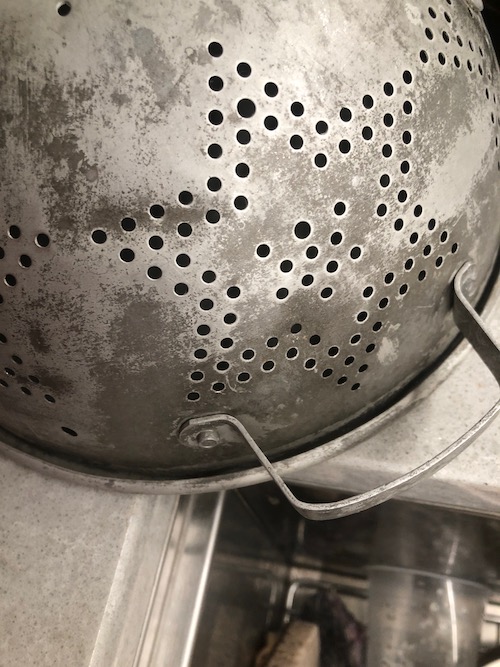 I am confident both are aluminum ; Steel would be magnetic, austenitic stainless is non-magnetic ,but normal relatively shiny or bright in consumer products. All steels are about 3 X more dense than aluminum if you could judge the density. Aluminum is subject to corrosion in solutions of salts, acids ,and bases. But I couldn't pick one of your components as the most likely cause. That is, I expect it is corrosion of aluminum you are seeing. I have had a very similar colander but washed it by hand because it was fairly large to put in a dish washer.

Not the answer you're looking for? Browse other questions tagged inorganic-chemistry reaction-mechanism or ask your own question.

2
Niobium (V) Fluoride becoming sticky
18
Are compounds containing active methylene groups positive for the haloform test?
2
Rust removal ended with black oxide on the metal?
3
What is the greenish substance formed after the electrolysis of two graphite electrodes in a sodium sulphate solution?
13
Cleaning with vinegar and sodium bicarbonate