Can I somehow 'reuse' the chemicals in glow sticks?

I particulary enjoy performing chemical experiments without buying any chemicals for them.

I was always sad about the fact that one glowstick lights out, you just throw it into trash can (I like all means of recycling). So I was wondering if I could (pick one or more):

Here is a generalized version of what's going on chemically. The key steps are dioxetane formation (the highly strained 4-membered ring) and its subsequent decomposition and energy transfer to a fluorescent dye, which then decays back to its ground state by emitting light. By using different fluorescers, you can change the wavelength (color) of the light emitted. 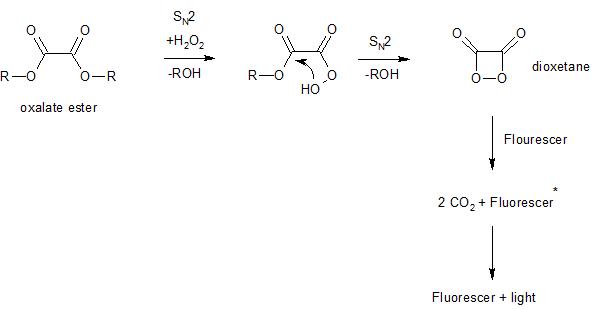 Each company that manufactures glowsticks has their own patent(s) and proprietary process, hence the variation from product to product.

So I was wondering if I could (pick one or more): 1.Recycle the chemicals in it to make it glow again 2.Use the chemicals for other interesting (and maybe even useful) experiment

2) Even after all of the starting materials are used up, the fluorescer still remains in solution. Exposing the glowstick to a black light will still cause it to fluoresce.

IIRC the reaction is an oxidation. Perhaps it could be reduced. I believe that hair permanent may be a reducing agent. It would be interesting to see if permanent would work but only done in a safe ventilated place.

5
How can I make homemade ink?
3
How can I protect my skin from KMnO4?
6
Mimic a volcano eruption with household chemicals?
2
Is there safe chemicals for making voice pitch or bass?
3
How to measure/know the moles of carbon dioxide (as dry ice) when in KOH solution
1
Determining the chemicals in potash and crystallizing them
0
How can I safely store highly outgassing self-pressurizing chemicals?