Is there a method in chemistry to alter the energy of atomic bonds by forcing atoms closer together in a smaller volume?

Similar to how pressure squeezes atoms closer together.

There are many ways in which bond lengths can be changed, and these will be accompanied by changes in bond energy. I will give examples for four different classes of substances, though they may not all count as "forcing" the bonds to be shorter in the way in which you mean. You can look these over, and perhaps clarify your question:

Glasses: Toughened glass is made by rapidly cooling glass, which creates internal stresses in which the interior is under tension (increasing bond lengths), while the surface is under compression (reducing bond lengths). So while the changes in bond length are still a result of pressure, the pressure is internally, rather than externally, applied.

Molecules: You can get the molecule to undergo a chemical change. For instance, changing ethane to ethene will shorten the carbon-carbon bond by converting it from a single bond to a double bond.

Metals: Different metallic crystal structures will have different densities, and thus likely also different average bond lengths (the change in density is not due purely to a change in bond lengths, but also to changes in atomic arrangements, including the number of nearest neighbors, next-nearest-neighbors, etc.). Thus you can alter bond length by inducing the substance to change from one crystal structure to another. As an example, I'll quote from https://www.conservation-wiki.com/wiki/Tin_pest :

Solid tin exists in two allotropic forms, white and grey, each of which contains different chemical properties. White tin has a body centered tetragonal crystalline structure and a density of 7.28, while grey tin has a cubic structure and a density of 5.84 (Faulkner 1965). This transformation is generally accepted to occur around 13C (Gilberg 1991:3). Below this temperature, grey tin is more stable, while white tin is more stable at temperatures above 13C.

Covalent network solids: Essentially the same effect as what was described for metals, above, except that the transformation involves making and breaking covalent bonds. A good example is the transformation between diamond and graphite; though note that, in this case, the structure changes from 3D (diamond) to 2D (graphite)

Here's a graphic by Wikipedia contributor Nath321 illustrating this: https://en.wikipedia.org/wiki/Atomic_spacing -- though here the comparison is between a 2D structure: 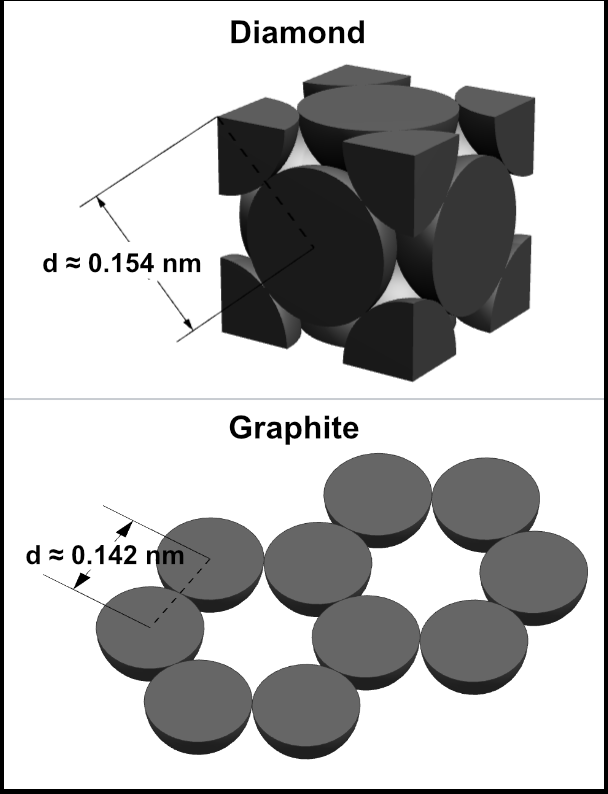 8
Are there any chemicals with this structural skeleton?
6
Interaction radius of a molecule
2
Why is polymer B more dense than polymer A?
5
Why does benzene have 3 π–π* transitions in the UV range, but ethene, butadiene, and hexatriene each have only 1?
1
How can ionic bonding in lanthanides occur without valence orbitals available for overlap?