How do orbitals coexist with a nucleus?

Many diagrams of orbitals I've seen involve electrons moving through a center point—where the nucleus is. How can this be? Clearly they don't actually pass through the nucleus, so what does happen?

In the definition of an s shell, you will find that its $\ell$ number is zero. In classical terms, that corresponds to an orbit with zero orbital or angular momentum — which for a large object is a clear impossibility. For an electron, it gives the peculiar result that any electron in any s shell is, classically speaking, moving back and forth through the nucleus, rather than around it. So, in one curious sense, what you just asked is exactly what happens: the classical analogy is that the electrons do go through the nucleus, which is why they have such a lovely spherical symmetry.

The second part of the answer, however, is that electrons can't go through the nucleus unless they are hugely more energetic than the ones found in a typical small-nucleus atom. Clearly there's a bit of a paradox going on there!

The resolution of the paradox is that very-low-mass charged particles must be treated by quantum rules. So, for example, rather than the electron behaving like a well-defined particle, it behaves like a standing wave. That standing wave can in turn be thought of as two simultaneous versions of the electron, one going (for example) clockwise and the other counterclockwise around. (The real situation has an infinite number of such components; I'm just picking out a single pair of them that demonstrate the principle.)

Each of these components can furthermore be thought of as being refracted by the powerful spherical charge field of the nucleus, curving around it without every striking it. This refraction is not the same as an attraction. In fact, it is this refraction effect that prevents the density of the electron cloud from reaching infinity at the nucleus — that is, from striking the nucleus. If you think of how a tank of water can cause a beam of light to bounce off the surface instead of entering the tank — and that's a terrible analogy, I know, I know — you can at least get some idea of how an increasing "optical density" towards a central point might keep light away rather than bringing it closer.

So for an electron that behaves "like" two waves going both clockwise and counterclockwise, the combined waves curve around the nucleus rather than striking it. This is a very quantum sort of event, since for a classical object such "splitting" of the object is simply not possible and the object simply dives straight into the source of attraction. But if objects are light enough, that kind of particle-like behavior simply ceases to be available to the object. Instead, you get waves that neatly and with perfect spherical symmetry curve around the nucleus, never obtaining enough energy (which makes it more particle-like) to connect directly with that nucleus.

Finally, notice that electrons in s (and other) shells necessarily combine multiple paths all at the same time. For each "image" of the electron that is traveling clockwise, there must also be an exactly balancing "image" of the same electron traveling counterclockwise, so that the two images always balance out to zero orbital momentum. What an amazing thing that is! And an important thing, too, since it's what makes chemistry possible.

So, good question, even if it really is more of a physics question per se than a chemistry question. But it's such an important chemistry question! It's like asking how the engine that powers the car works. You can accept it as a given that all cars and vehicles have engines, and that they all work in a certain way. However, sometimes it's nice to dive in a little deeper and try to understand why these peculiar things do the things that make chemistry possible — that is, how the engine really works.

Electrons can be considered both particles and waves (wiki). Basically, considering electrons to be particles is insufficient to explain many of the observed phenomena.

In this case, a particle wouldn't really pass through the nucleus, but a wave certainly could. Take, for example, the 2p orbital, which is centered around the nucleus with two lobes. The wave function can let us visualize where an electron is more likely to be found: (from PSU.edu) 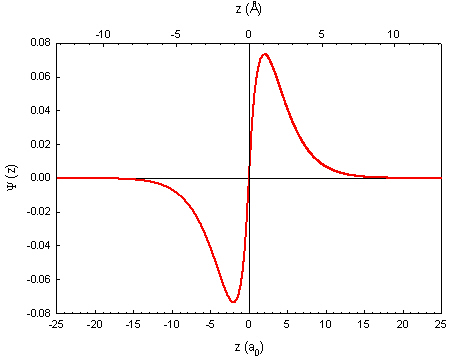 The probability density function is found by squaring the wave function, and the PDF shows where the electron is likely to be observed:

(sorry for the small size)

The best analogy I can give is if you wave a jump rope up and down, you can't really isolate the wave in the jump rope, but it is still clearly there. Long story short, a particle doesn't pass through the nucleus, but a wave can and does.

The $\mathrm{p}$ orbitals, for example, have a nodal plane where the nucleus is, which means the electron density is zero there.

An orbital doesn't represent a path the electrons take when moving. An orbital is a region of probability. To make things clear and definite, when we draw an orbital we only draw the region where 95% (for example) of the probability lies. The fact that the $\mathrm{p}$ orbitals have a nodal plane simply means that the probability of finding an electron on that plane vanishes.

A positivist would thus consider an electron's trajectory around a nucleus nonsensical, since by the uncertainty principle, we can never measure it.

The use of orbitals is for visualizing electron density - where can the electron be, most of the time? It's a very useful way of interpreting phenomena such as chemical reactivity (think of $\mathrm{S_N2}$) or stability (think of benzene's $\mathrm{p}$ orbitals).

Remember, orbitals don't show where electrons are, they show the probability density of where a measurement would find them. Likely, at a scale close enough to the nucleus (where the probability of the electron being is exceedingly small to begin with, the electron's actual wavefunction is affected by the nucleus in such a way that either they can't overlap or the chance is even more vanishingly small.

I'm a bit rusty, but I believe every orbital but the 1s has a node at or on a plane through the nucleus anyway.

A bit of a rigorous answer here. This was the explanation I received in school.

Which is about 100 times the speed of light. This is impossible, hence by contradiction, we see that an electron cannot exist within the nucleus.

For a more rigorous mathematical approach, the nucleus can be assumed to be a sphere (here, I have assumed that it's more of a one-dimensional path). You can then replace $\Delta x$ with $\Delta \vec r$ and evaluate the uncertainty principle in three dimensions using either cartesian or spherical coordinates. You would obtain a similar answer in those cases as well

Not the answer you're looking for? Browse other questions tagged electrons orbitals or ask your own question.

87
Why is the 2s orbital lower in energy than the 2p orbital when the electrons in 2s are usually farther from the nucleus?

8
Why allene cannot be described with an allyl system?
11
How do Electrons Cross Nodes in Orbitals?
1
Electron configuration and the 2p orbital
4
In Chemistry, is it possible to use the old representation of the atom as a nucleus surrounded by orbiting particles?
3
What are Orbitals?
4
Spiralling of electrons into the nucleus