But I don't get why proteins cannot form branched polymers. Proteins have both an amino group and a carboxylic acid group, and I understand that the two groups join together with the elimination of a water molecule during polymerization.

Branched polymers are formed when a hydrogen atom (or any other substituent) is replaced by another monomer unit, and I don't see why this can't take place in the case of proteins. Could someone please explain?

Note that branching is not unheard of, for instance glutathione is an abundant short branched peptide formed by condensation of the carboxylic group on a glutamic acid side chain to the main chain amino group of a cysteine aminoacid. This requires a dedicated enzyme both for synthesis (glutamate cysteine ligase) and degradation of the gamma peptide bond. Such gamma peptide bonds could serve as the basis for branching but afaik occur only in special cases.

An important example of branching also occurs during ubiquitylation, in which ubiquitin is attached to a protein's C-terminus via lysine side chains to target the protein for degradation. A variety of polyubiquitin chain arrangements (including multiple branching) have been identified.

I suppose one can only speculate from its absence (or non-ubiquity) that branching either (1) does not generally confer a significant evolutionary advantage or that (2) there are evolutionary barriers that have impeded development of advantageous biochemical machinery for generation and regulation of branching.

Proteins are built from monomers with only two linking groups

The monomers that make up proteins join in very specific ways. The general structure is:

where R can be a variety of possible groups. To form a protein the monomers join when the amino group reacts with the carboxylic acid group. this gives a product with a specific orientation and which still contains one free amino group and one free carboxylic acid. Another monomer can react at either end but, inevitably, the core chain of the backbone is linear (at least in the sense that no branches are possible).

Glucose, on the other hand, has several groups that can react in condensation reactions: 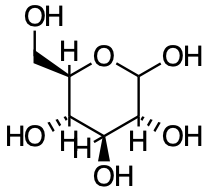 so, depending on which groups react, there is the possibility for branches to form in the core chain of the polymers that result.

It is worth noting that a limited from of other links can form with proteins, though these would not normally be called "branches" as they don't affect the core chain making up the protein. These can occur when the R group in the amino acid has some sulfur groups which can form S-S cross links by reacting with other amino acids elsewhere in the protein chain.

But the basic idea explaining why proteins don't form branches in their core backbone is that, the monomers have only two sites where polymer links can form. Branched chain polymers need each monomers to have more than two sites for forming polymer links.

Not the answer you're looking for? Browse other questions tagged biochemistry polymers proteins or ask your own question.

1
Monomers and polymers
1
why do we denature proteins before mass spectroscopy?
4
Polymerisation of a UV-curing resin