I am asking on behalf of a friend so please bear with me!

The main trouble is that while I can classify the VOC's, I am not at all sure about the PM's and others.

Some other chemicals are completely empty such as "CHLORAMBEN" and "HYDRAZINE". For these, I simply have no idea how to classify them.

Could anyone check what I have done so far, and provide some hints/guidelines on what to do with the rest, especially on how to classify a PM please?

Thank you so much! 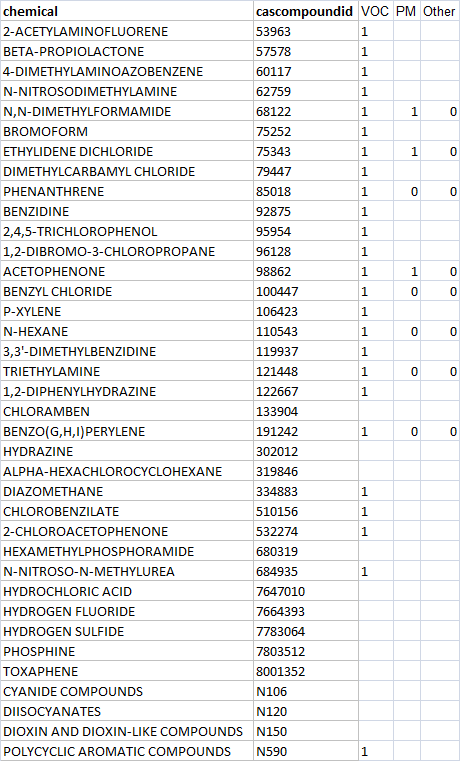 2-Acetylaminofluorene is a solid, mp 192-196 C. It satisfies the definition of being a VOC by virtue of being a compound of carbon, not excluded by the definition. It could be fine enough to be classified as PM 2.5 or 10 if it is powdered; more information would be necessary about the source of the compound. It is also carcinogenic, but that does not appear to be involved in the questionnaire.

Chloramben can be looked up and is also a solid with a high melting point: a VOC and possibly a PM.

Hydrazine is only dangerous, but not a VOC, and a liquid with a bp of 114 C. Not a PM. I don't think a spray of droplets would qualify as a PM; they would just evaporate.

Diisocyanates: VOCs for sure. Hazardous for sure. If you allow a pot of diisocyanates to evaporate, that's all: no PM. However, I can imagine a source of sprayed diisocyanates (in a paint?) that would result in polymerized particulate matter: then it could be a PM. Thus the classification would depend on the source of the material - the environment and the application.

Polycyclic aromatic compounds: most often encountered in smoke from various sources: VOC for sure, probably also PM because they could be larger agglomerates than single molecules.

This could be a fun exercise for a chemist to look up and play with mentally, to get to know and understand a large number of chemicals. For a non-chemist, this could be very difficult.

Not the answer you're looking for? Browse other questions tagged organic-chemistry environmental-chemistry or ask your own question.