I have recently run proton NMR on 1-(furan-2-yl)ethan-1-ol I synthesised in the lab.

My 400 MHz spectrum consists of the following peaks: 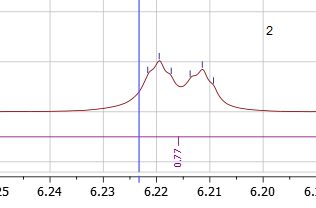 I agree with Buck Thorn's comment. I suspect the coupling in the quartet is just not fully resolved. I'm not 100% sure why, but one possible reason is because there is further unresolved coupling with the OH peak: instead of being resolved as a splitting in the spectrum this just broadens the individual lines. Or it could just be that that proton relaxes faster.

You may be able to play around with window functions (or apodisation as it's referred to in Mestrenova) to try and tease out this small coupling. My suggestion would be: try enabling/selecting both "Gaussian" and "Exponential", set the exponential value to -2 Hz and the gaussian value to 0.2 GF, or something similar. See if the quartet is still a quartet. [From the comments, it seems that this has worked and that the quartet is actually a quartet of doublets under the hood.]

The window functions are basically mathematical functions that you multiply the FID by prior to Fourier transformation. Peaks in the FID generally have a damped sinusoidal form. The faster a signal decays to zero, the larger the corresponding linewidth will be, i.e. the broader the peak will be.

The two "big" window functions for 1D processing are exponential and Gaussian window functions. I won't go into too much detail because these are very well-described elsewhere. See e.g. Chapter 5 of Keeler's Understanding NMR Spectroscopy (2nd ed.), or Glenn Facey's blog posts on Exponential Line Broadening and Resolution Enhancement (which also include some helpful pictures). Googling for either "window function nmr" or "apodisation nmr" will also throw up a huge number of documents.

The exponential one basically multiplies the FID by another decaying exponential. This is largest at the start and decreases as time passes, so effectively causes peaks to look as if they're decaying even faster. This leads to broader lines, but because the decaying exponential is largest at small $t$ where the signal is large, it "emphasises" the parts of the FID that have more signal. Effectively, you lose spectral resolution but gain some signal-to-noise.

A Gaussian window function (or a combination of Gaussian + exponential, which is more common) starts small, reaches a maximum in the middle, and tails off again towards the end. In a way it has an opposite effect to the exponential: by trying to "compensate" for the natural signal decay, it makes the peaks look as if they are decaying more slowly, i.e. you get narrower lineshapes. On the other hand, you lose signal-to-noise because you de-emphasise the start of the FID which has the greatest signal.

Not the answer you're looking for? Browse other questions tagged organic-chemistry nmr-spectroscopy heterocyclic-compounds or ask your own question.