I try to understand, from the electromagnetic side only, how the molecule could be more stable than each atom, and concluded that it could not. Where is my mistake?

Here is an illustration :

By using a ruler in order to have an "example" of numerical values, we conclude, by taking the numerical values of distance in the electric field formula (I removed the common factor with $\epsilon_0$, $\pi$, etc.), that the repulsion force is bigger than the attraction force.

So where is the mistake in my reasoning ?

(I try to stay at a very basic approach of fundamental law of electromagnetism, so not using LCAO with quantum mechanics) 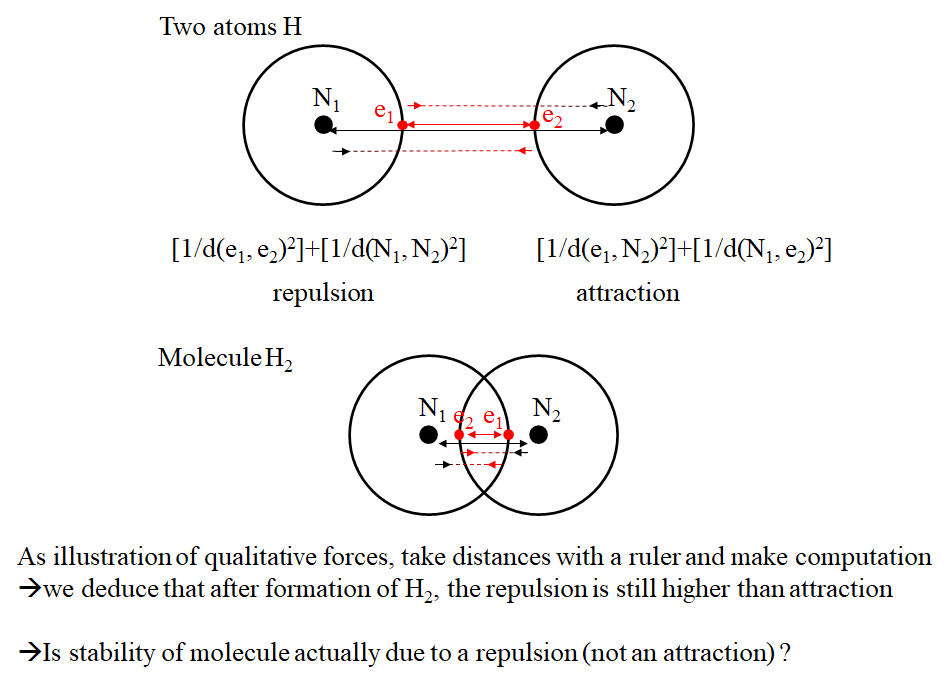 I assume you mean from the classical electrodynamics side only, not from quantum electrodynamics side. By the former, even H atom cannot exist, as the electron would fall along a spiral curve on the nucleus, continually emitting radiation being radially accelerated.

For a hydrogen molecule, both electrons move around both protons, they are not dedicated to the one they came with.

The scenario in the bottom picture is one of the less preferred positions, having rather higher energy due short distance of negative charges. But there is plenty of different positions where the whole system would have lower energy than if they were 2 and 2 separately.

Note that even classical system have no general analytic solution for the motion equations for more than 2 objects.

Such questions troubled physicists in the early 20th century. Their inability to add more than one electron to the planetary Bohr-model was one of the reasons that quantum mechanics was developed. Nevertheless, continuing to ask this type of questions may help us sharpen our thinking and develop our intuition, as far as it goes (you might also take a look at the simpler Gedanken-experiment about Helium explored here).

In the case at hand, we will not be able to find an analytical solution because this is a four-body problem. However, if you did want to portray the molecule with point charges in a plane then it might be more fruitful to draw an ellipse with —for argument's sake— two electrons in opposite positions ‘chasing each other’. The time-varying force balance will depend on the specific configuration as illustrated with two sketches below.

The intuitively most favourable position would be figure A. In this case, the sum of the attractive forces from the electrons on each proton is higher than the repulsive force between the protons: i.e. there is a net attraction. The least favourable case would seem to be figure B where the electrons pull the protons away from each other in addition to their natural repulsion. One might imagine that the actual force balance is some sort of convoluted average between these extremes — but calculating any such point charge model with multiple electrons has so far proven to be a dead end.

Surprisingly, the parameters of the $\ce{H2}$ molecule can be calculated using classical electrodynamics provided we approach the electron not as a point charge but as a membrane of distributed charge, as proposed by Mills. The shape of the molecule in his theory turns out to be the 3D version of the ellipse pictured above, with the (large) electrons physically encompassing the (small) nuclei.

The internuclear distance is calculated at $\sqrt2$ times the Bohr radius and the binding energy, i.e. the difference between 2 separate $\ce{H}$ atoms and an $\ce{H2}$ molecule, works out to 4.5 eV — in line with the experimental value. It is this more advantageous energy level that makes $\ce{H2}$ a stable molecule.

Not the answer you're looking for? Browse other questions tagged physical-chemistry bond molecular-orbital-theory theoretical-chemistry valence-bond-theory or ask your own question.

12
Why is covalent bonding stronger than electrostatic attraction?
4
Where does the energy of formation of covalent bonds come from?
2
Covalent bonds other then 2-center, 2-electron bonds
8
Does the shared electron in Covalent bonds revolve around nucleus?
3
How can alkali metals form covalent bonds?
3
Are imine or amine bonds similar to ethereal bonds, from the perspective of an enzyme?