What does this question mean by generally octahedral? Can this molecule adopt other shapes?

Also I have my suspicions about the Br-S-F bond angle being a perfect 180 degrees. Wouldn't vdW repulsions distort the bond angle and make it ~180 degrees? The way I see it, if we place the bromine axial, wouldn't its sheer size push down on the fluorines in the equatorial plane and thus distort the 180 degree bond angle?

Are there any ways to verify this other than jumping through hoops in one's mind? I tried making Marvin Sketch render the molecule but it wasn't useful (or I wasn't using it correctly).

The term "generally octahedral" refers to a distorted octahedral arrangement of the ligands referring to the central atom (as ron already stated). In this case the distortion is due to the massively different bond lengths.

In addition to ron's answer I did a little calculation at BP86/cc-pVDZ. I did not use any symmetry constraints at first and the final geometry deviated from ideal $C_\mathrm{4v}$ geometry only slightly due to rounding errors. After symmetry constraint reoptimisation, the following parameters may be found: 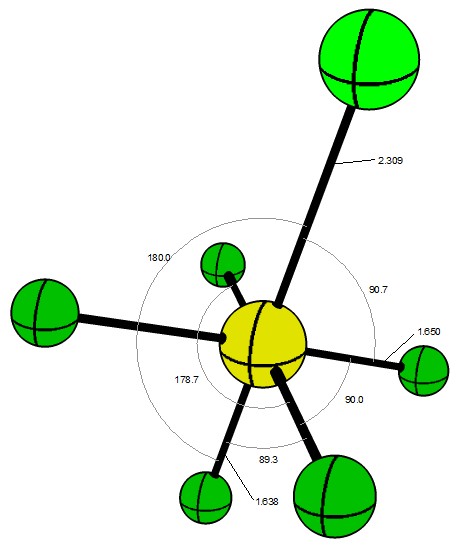 I was unable to determine a interconversion barrier related to the $\angle(\ce{F_{eq}-S-Br})$ bond angle change. I was also not able to find a different stable isomer.

In solid state it is most likely, that the geometric parameters will change due to packing effects and/or more internal entropy.

Yes, the bromine pushes down the fluorines of the equatorial plane resulting in $\angle(\ce{F_{ax}-S-F_{eq}})=89.3^{\circ}$ bond angle. Due to this, the sulfur is out of plane with the equatorial fluorine atoms. Since the planes expanded by $\ce{Br-S-F_{eq}}$ and $\ce{Br-S-F'_{eq}}$ have to be at $90^\circ$ due to symmetry constraints, this is creating also a slightly smaller angle than $90^\circ$ for the equatorial fluorines. In this very case it can be found to be $\angle(\ce{F_{eq}-S-F'_{eq}})=89.992^{\circ}$, which was rounded by the program to fit the one decimal place restriction. The application of this is just trigonometry and you can derive it as a simple thought experiment - if you like.

A useful way to determine if something is a perfect octahedron, tetrahedron, $\ce{sp^2}$ orbital, whatever, is through the use of symmetry. If any two atoms can be interconverted by rotation about an axis of symmetry or reflection through a plane of symmetry, then those atoms must be equivalent. If two atoms cannot be interconverted by such symmetry operations than they must be non-equivalent. Point groups and the symmetry elements they contain can make for an entire chemistry course, but the essentials can be learned quickly. Here is a useful reference (one of many, you can google "molecular symmetry, point groups" to find something more to your liking) on the subject.

Let's use the following drawing as a starting point to discuss the geometry of $\ce{BrSF_5}$. We will use the term "axial" or "apical" to describe the F and Br atoms at the top and bottom of the drawing respectively, while the remaining 4 fluorines are termed "equatorial. 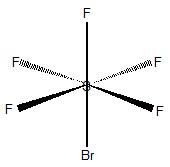 Applying symmetry to $\ce{BrSF_5}$ tells us the following

The rotational axis interconverts the 4 equatorial fluorine atoms, therefor they are equivalent as are the 4 F-S-F angles which must be (360/4) 90 degrees. Further, at least as I've drawn it here, the same rotational axis interconverts the bromine with itself (it sounds silly, but think about it) and the axial fluorine with itself. Therefor, the Br-S-F(axial) angle must be 180 degrees. There is no plane of symmetry containing the S and 4 equatorial fluorines (because reflection through such a plane does not interconvert what's above the plane (F) with what's below the plane (Br). This is a very important observation. It tells us that the Br-S-F(equatorial) angle cannot be exactly 90 degrees. It might be 90.001 or 85.278 degrees, but it can't be exactly 90 degrees - because of the lack of symmetry. Symmetry can only tell us if things are the same or different, it can't tell us if different things differ by a lot or a little, we need to use our other chemical skills to do that. So if the angle is not 90 degrees, then the S and 4 equatorial fluorines do not lie in a common plane; the 4 equatorial fluorines must be canted towards either the axial fluorine or the axial bromine. I don't know which of those two options is preferred, but I would guess that the energy difference between these two forms is small and the barrier to their interconversion is small, so I might expect rapid interconversion between these 2 slightly distorted octahedral forms at room temperature. At absolute zero, or perhaps in a crystal, only one of these two forms would prevail.

12
How does the pyramidalization effect the bonding angles in a distorted octahedral environment?

12
How does the pyramidalization effect the bonding angles in a distorted octahedral environment?
3
IBrF2 - van der Waals repulsions - and number of unique bond angles
6
Constrain bond angle In Gaussian molecular structure optimization
2
Which species occupy the equatorial positions in VSEPR's trigonal bipyramidal and octahedral geometry
5
Why do the lone pairs of electrons first occupy axial positions before occupying equatorial positions for species with octahedral geometry?
1
Is the VSEPR theory correct in determining the bond angle of sulfur dioxide?
18
Why do we not generally have “enneane”?
5
What is the precise definition of Ramachandran angles?
7
Meaning of the term “vertex” in the topic of skeletal formulae