Ramachandran Plot for Phi and Psi angles of peptides

Why do we consider the normal and extreme limits for Ramachandran plots to be less than the Van Der Waal distances between two atoms? 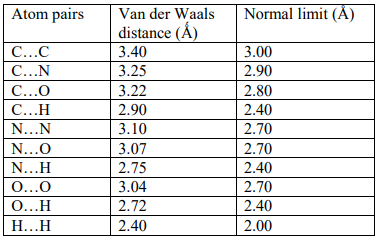 A remarkable aspect of the Ramachandran plots is that the implementation of a hard-sphere potential with flexibility limited to the two backbone dihedrals proved sufficient to largely explain the conformational range sampled by real polypeptides. Take for instance the following map from a seminal article by Ramachandran (from Ref. 1; dashed line encloses the partially allowed region): 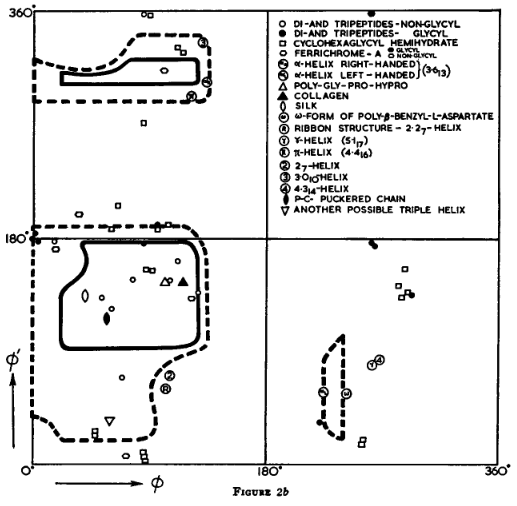 The map was generated with the following set of restraints: 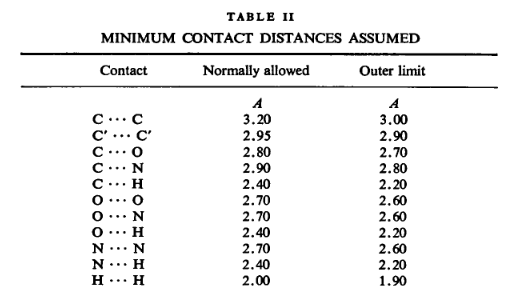 In the article Ramachandran et al. explain how they selected the range of vdW distances used to generate their maps:

van der Waals radii are meant to define distances of closest approach. They are useful to identify conformational regions forbidden due to steric clashes. However, tabulated vdW radii are representative values. In real molecules the internuclear potential can vary somewhat depending on atomic types and the local electronic environment.

In addition, molecules are fairly flexible and can to a degree circumvent potential clashes by changing internuclear distances and angles, but a rigid model does not capture that. That a simple rigid model suggests a steric clash, because one or more vdW distance restraints are violated, does not guarantee that a conformation (phi/psi pair) is forbidden. Therefore, if you use a rigid model to generate a Ramachandran plot, that is, if only phi and psi are allowed to change, then you should allow "wiggle room", for instance by setting a lower threshold for the allowed values of the vdW distances. The use of "tolerances" in vdW radii should therefore not be surprising.

Close contacts can be energetically costly even with compensating rearrangements, so the associated configurational space - marked as "partially allowed" in a traditional diagram - is more sparse. In a modern approach a more descriptive potential for the protein backbone is employed, and ideally degrees of freedom other than the dihedral angles are relaxed, and energy isolines are displayed. The following, from Ref. 2, shows roughly how such a diagram might look: 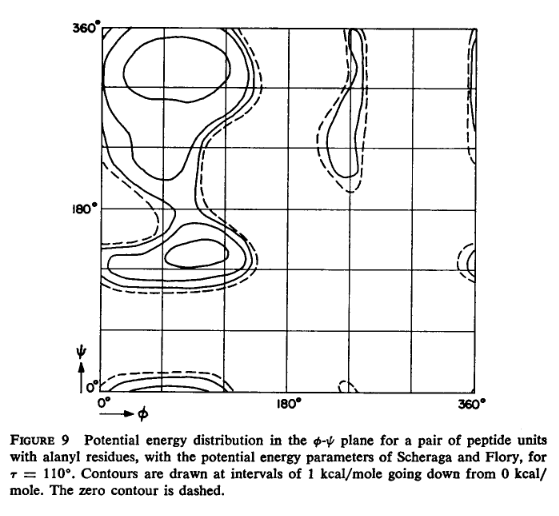 12
What are the border definitions in the Ramachandran plot?
16
What is Cβ (C-beta) deviation?
8
Diffusion and potential gradients for two similar atoms
9
What's the difference between ΔG° and ΔG°'?
0
Why are phosphate-phosphate bonds weaker than phosphate-water bonds?
6
What is the precise definition of Ramachandran angles?
1
Understanding Scatchard Plots
6
Ramachandran plot Phi(ϕ) Psi(ψ) dihedral angle Convention for Zero, Positive and Negative value- old and new