Based on this page in a “Blaze” book, my six year old asked “which would win?” between water and lava. On further investigation, we refined the question to: which would turn solid first in similar conditions, a liter of room temperature water or a liter of volcanic lava? 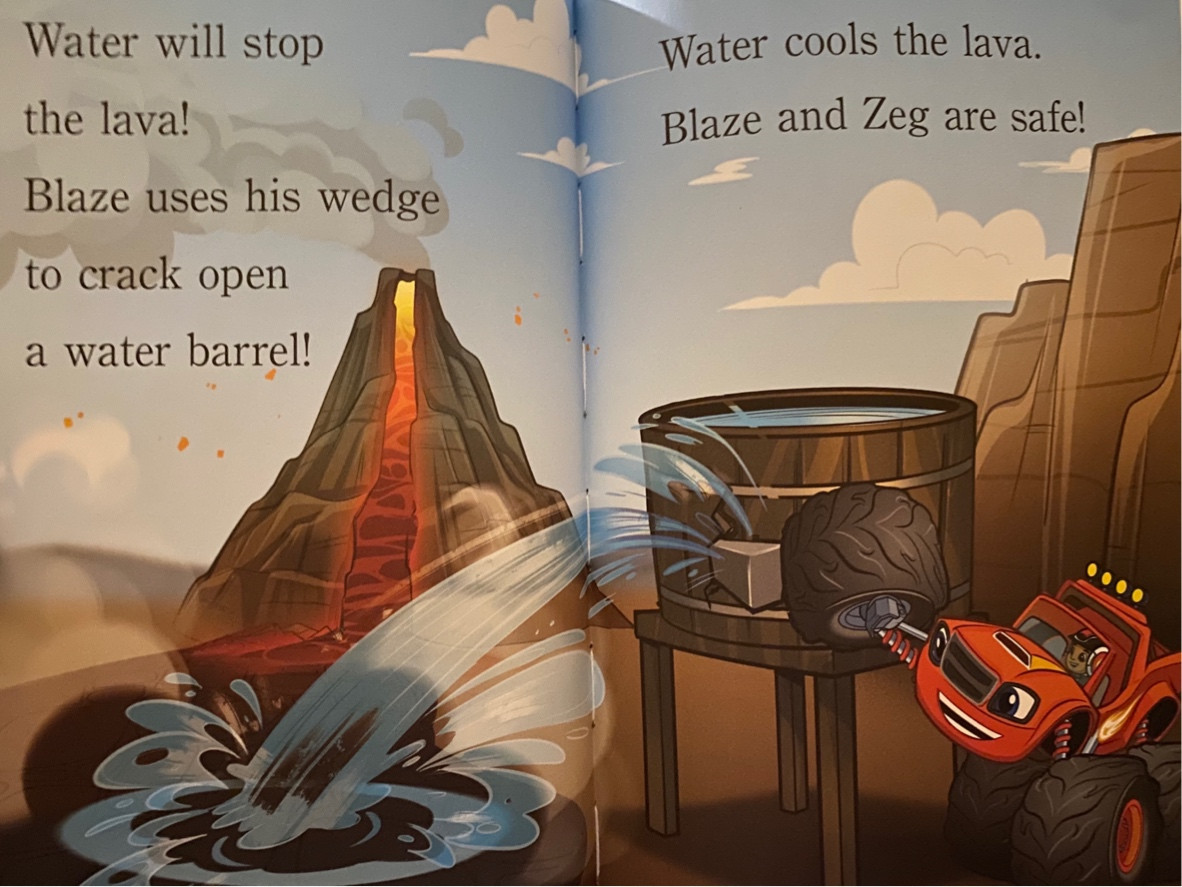 You've got the right idea — you want to simplify the problem — but I don't think you're using quite the right simplification. Take a look at the book's set-up of the situation, and ask yourself how the water is stopping the lava. You'll see the idea is that we're using liquid water, not ice, to solidify the lava.

[I'm using "heat" when I should really be using "thermal energy", but this is for a 6 yo, so I'm keeping it simple.]

Finally, why does the water win? The main reason is that the water is going between a liquid and a gas, while the lava is going between a solid and a liquid. And, in general, it takes much more energy to change liquids into gases than solids into liquids, because in the former case you are pulling the molecules completely apart from each other.

But I said it takes "much more energy" to change a liquid to a gas than a solid to a liquid, yet the difference here is only a factor of 1.5. The discrepancy is because in this case you're not comparing masses of water and lava, you're comparing volumes (and for the same volume, the mass of lava is 3.1 x greater). Thus, if you do it on a mass basis, 1 kg of water is enough to solidify 6 kg of lava (because, while 1 L of water weighs 1 kg, 1.5 L of lava weighs 6 kg).

[For these quantities, mass is typically a more fundamental basis of comparison than volume, which is why heat capacities, heats of fusion, and heats of vaporization are usually quoted on a mass basis. When you see the term "specific", as in "specific heat capacity, that means "per unit mass". Of course, one can also use a number basis (moles).]

You need to specify the conditions a bit more completely:

However, the two of you have asked an interesting question that should be interesting to explore!

There is a table showing the temperature at which some minerals melt or convert to others, Bowen's Reaction Series, and the link is nicely illustrated, perhaps not too advanced to pique the interest of a six-year old.

The thermodynamics involved might overwhelm the child, but the question is a good one. It shows the child has taken the information in the book and re-applied it to a new problem (the stated question was about freezing and has nothing to do with steam, contrary to a previous answer). He seemingly already understands that the cold water has cooled and frozen (solidified) the lava. He has moved ahead and designed a new experiment to test the differences between the rates of change of two different materials and how much each one would need to change state to a solid.

This is a golden opportunity to explain "heat", rates of change, and state-change in general terms, rather than needing a hard answer.

Disclaimer: I am an armchair scientist/engineer, but I love this stuff (until the greek symbols show up).

The real consideration is how much heat does it take to change the state of each material and how fast it can move. Well, "it depends on a few things", is the answer. But that is not a bummer if you can follow up with some basic and important concepts, which is the real gist of the question, and this leads to a great discussion: thermal energy transfer, states of matter and state change based on temperature. You may or may not want to omit pressure from that discussion, depending on this child's understanding of science. If omitting, then:

Discuss that water has a 100C range between frozen and gas. Magma has (I don't know offhand, but it is going to be a LOT more -- how hot does it need to be to vaporize?).

So it depends on where the material started: Each material will gain or lose heat at a certain rate. the temperature in the freezer can be considered constant (if the kid is a genius, let them know that the magma will heat up the freezer a bit, and the water less so, but it will). This will open the door to the critical effect here: heat transfer.

You can use the analogy of two buckets with different sized holes in them. Even if one bucket is bigger to start out, if you make a hole in the bottom that is the size of the whole bottom, it will clearly empty first. If the holes are about the same size, but there is more water in one bucket than the other, then... you get the idea. So there are two factors: how much water (heat) is left to lose before empty (freezing), and how big is the hole in the bucket. Now, instead of water, the thing that is emptying out of each bucket is heat.

Again, the two takeaways here are:

In my experience, inquiring minds like this one don't crave hard, exact answers nearly as much as the reasoning and concepts behind them. There's time for the math later, but understanding heat transfer and state change is the real opportunity. Remember kiddo, you aren't "getting colder" by going outside in the winter, you are simply losing heat. Since your head loses heat faster than your body, that's why you gotta wear this hat.

PS - one liter of magma or water in a thin sheet will cool off much faster than if it is a perfect spherical volume. Again, "it depends on a lot of things". The bucket analogy there, to explain surface area, is that there are more holes in the bucket, so there is more exposure to the colder air (that air contains less heat) at the same time, so more heat will transfer at once.

2
Delta G at Equlibrium
5
Chemical Kinetics - change to system conditions
1
Is there a widespread error/contradiction on whether to use internal or external pressure in computing work done by an expanding gas?
6
What is the Gibbs energy of dissolving a solid in pure water?
4
How is a phase equilibrium defined for a one-component system?