Will equilibrium ever establish if one of the products starts to disassociate?

The first reaction will then proceed backwards as predicted by Le Chatelier's principle (since the concentration of $\ce{O_2}$ is more than the equilibrim conc.).

Due to this the oxygen level will drop and equilibrium for the second reaction will get disturbed and $\ce{N_2O_3}$ will decompose further to form oxygen.

But this process will go on forever. There is definitely wrong with this. Will this really happen or is there some other mechanism at work?

Let's make this an abstract problem with species A, B, C, and F:

We can also write down the sum of the two reactions, which will also be at equilibrium:

And let's use a for the concentration of A and so on.

Finding the solution using reactions 1 and 3

Now we have three equations and three unknowns. We can combine the first and third equation to eliminate $a$:

We can multiply the second equation in preparation for solving for $c$:

Subtracting the latter equation gives the solution for $c$:

Will it ever stop?

Due to this the oxygen level will drop and equilibrium for the second reaction will get disturbed and $\ce{N_2O_3}$ will decompose further to form oxygen.

But this process will go on forever. There is definitely wrong with this. Will this really happen or is there some other mechanism at work?

If you look at this step-wise (figure out how much one reaction would go, disregarding the other), you are never done. This is similar to Zeno's paradox. However, the corrections get smaller and smaller, and your approximation gets better and better.

In general, reactions approach equilibrium, they don’t reach it. Nothing special about this system.

Now consider the case that the second reaction is not at equilibrium $\ce{N2O3 \to N2O + O2}$ then once $\ce{N2O3}$ is formed it reacts irreversibly and is lost. This will also deplete all the $\ce{N2O5}$. Eventually only $\ce{N2O}$ and oxygen will remain.

It is possible to solve the differential rate equations for these reactions and technically equilibrium is never reached, but this is an artefact of using this approach and not real. Instead, using what is called a Monte-Carlo approach uses the fact that at any given time a molecule may react or may not and by counting the number of molecules present at any time the kinetics can be determined. As we use only a few molecules this shows that there is some random fluctuation in the numbers of reactants and products, this fluctuation represents what happens with small numbers of molecules and means that the population properly reached equilibrium but fluctuates about this. This may seem silly when there are $10^{20}$ molecules reacting but if a small region is examined, say a sphere of some nm radius then this fluctuation will be apparent. This is, of course, the same throughout the sample.

The first figure shows the equilibrium calculation with both reactions, I have arbitrarily chosen rate constants to show the populations clearly. The second figure (with a longer time scale) shows how the species are depleted when the $\ce{N2O3}$ equilibrium is made 'one-way' by making the reverse rate constant zero. 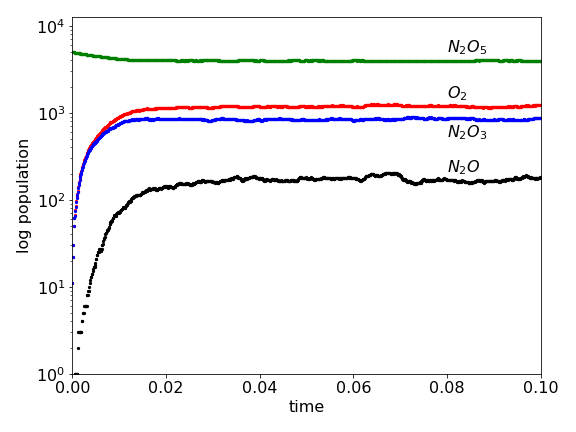 Above, the log populations vs time under equilibrium conditions. 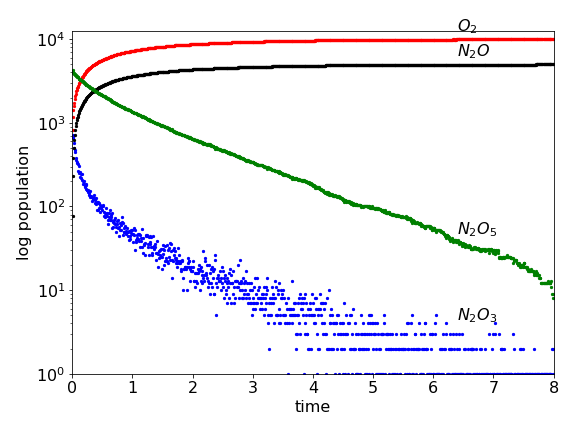 Log populations when the second equilibrium is made irreversible, i.e. $\ce{N2O3 \to N_2O + O2}$. Only $\ce{N2O}$ and $\ce{O2}$ remain as there is no further reaction possible for them. Notice that the time scales are different in the two plots.