What should be the nomenclature of this organic compound?

I am confused with my teacher's explanation for the nomenclature of this organic compound. 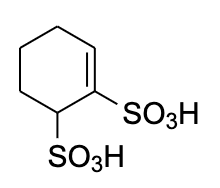 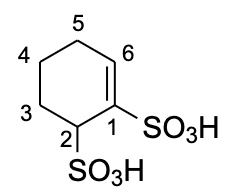 So isn't the student saying correct ?

Although this isn't disputed by anybody here, let's start by noting that in general, suffixes have greater "priority" over double and triple bonds in numbering. The rules are given in Nomenclature of Organic Chemistry: IUPAC Recommendations and Preferred Names 2013 (Blue Book):

When several structural features appear in cyclic and acyclic compounds, low locants are assigned to them in the following decreasing order of seniority:
[...]
(c) principal characteristic groups and free valences (suffixes);
[...]
(e) saturation/unsaturation

This means that the sulfonic acid suffixes should obtain the locants 1 and 2, which are the lowest possible for two adjacent groups. There are two possible ways of doing this.

With the sulfonic acid groups sorted, we can now turn to the thorny issue of the alkene. It is more complicated than I thought, actually. First, let's consider how to refer to the double bonds in the names. Again, the answer is provided by the Blue Book.

[...] Only the lower locant for a multiple bond is cited, except when the numerical difference between the two locants is greater than one, in which case the higher locant is enclosed in parentheses.

On the left, this is a "typical" double bond where the locants (2 and 3) differ by 1, and so only the lower locant is cited.

On the right, the locants (1 and 6) differ by more than 1, so both locants are cited with the higher one in parentheses.

Lastly, we have to make a choice between these two. We turn to the last rule for today:

Since the option on the left-hand side has no compound locants, and the one on the right has one compound locant, the left choice is preferred. Therefore, the preferred IUPAC name for the molecule is cyclohex-2-ene-1,2-disulfonic acid.

There is a convention we follow while numbering cycloalkenes, numbering is always done through the double bond, meaning that the double bonded carbon atoms must always get consecutive numbers.

This rules out the student's way of assigning numbers.

So, now we have two options, and using basic rules of assigning numbers, you would easily come to the conclusion that your teacher's answer is the correct one.

Reference : https://chem.libretexts.org/Bookshelves/Organic_Chemistry/Book%3A_Basic_Principles_of_Organic_Chemistry_(Roberts_and_Caserio)/03%3A_Organic_Nomenclature/3.04%3A_Alkenes_Cycloalkenes_and_Alkadienes See the paragraph corresponding to the naming of cycloalkenes.