Ask Question
Asked 8 months ago
Active 8 months ago
Viewed 436 times
0
$\begingroup$
Closed. This question is off-topic. It is not currently accepting answers. 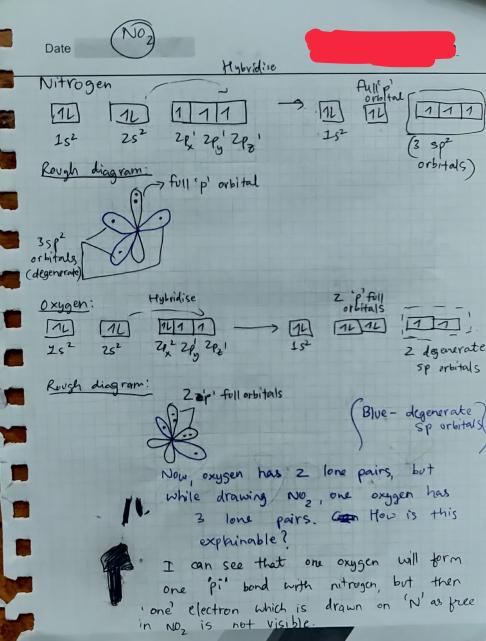 Let us consider the Nitrogen, it has one full $\mathrm{p}$ orbital (AKA lone pair) and 3 single electrons in 3 $\mathrm{sp^2}$ orbitals, so that means that it can form 3 bonds – first it bonds with one oxygen forming a σ bond, leaving the nitrogen with 2 electrons, now the nitrogen forms one π bond with the same oxygen and the remaining single electron forms another σ bond with another oxygen atom. Where is the single radical on the nitrogen after all the bonding has taken place? 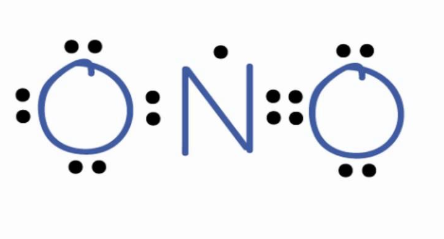 Moreover, as in the above picture, people draw the other oxygen (the one that did not form a π bond with nitrogen) as having 3 lone pairs, whereas, after the hybridization of the oxygen atom, I can only see it having 2 lone pairs in 2 $\mathrm{p}$ orbitals.

What is actually correct? Am I going wrong somewhere?

In your simple model, you start off with:

Now the question is how to do a π system (obviously there can only be one σ bond between two atoms). The orbitals used for the π system must be orthogonal to the bond axis, since that axis must be a node. Both oxygens have two p-type orbitals which fulfill this condition. Nitrogen also must use its p-type orbital to form the π bond. The $\mathrm{sp^2}$ orbital cannot because it is in the same plane as the other two $\mathrm{sp^2}$ orbitals, angled at $120^\circ$ rather than $90^\circ$. This gives us a π system composed of two oxygen p orbitals (one on each oxygen) and one nitrogen p orbital; choosing our orbitals well will result in this π system having four electrons. Essentially, this is theme and variation of Your Average 4-electron-3-centre bonding; but you can also consider it akin to the allyl anion.

The one remaining unpaired orbital would be in $\mathrm{sp^2}$ on nitrogen, pointing away from both $\ce{N-O}$ bonds but being in the same plane.

The above are the considerations and reasonings that you should use from the starting point you had. It is not the only way. You could assume that nitrogens five electrons are actually distributed as $\mathrm{2(sp^2)^1 + (sp^2)^2 + p^1}$. In this case, the argument outlined above is essentially the same except that the π system now contains three electrons rather than four; it is an allyl radical system, if you wish. Since this ab initio construction will lead to all orbitals with s contribution ($\mathrm{sp^2}$ on nitrogen, $\mathrm{sp}$ on oxygen) being fully occupied, it is more consistent with Bent’s rule and likely to be a better proposition.

If you do it like this, you can – in the Lewis 2-electron-2-centre formalism – choose either oxygen and have the radical form an $\ce{N-O}$ π bond on that side; the other will remain a radical. By resonance, you can draw the mirrored molecule.

In these structures, the radical is never centred on nitrogen although we find that dimerisation at low temperatures leads to $\ce{O2N-NO2}$.

$\ce{NO2}$ , $\ce{NO}$, $\ce{ClO2}$ and a few other are deceptively simple molecules with surprisingly sophisticated bonding. Their reasonable understanding requires use of molecular orbitals theory. Below I try to invoke resonance to provide a simpler understanding for $\ce{NO2}$

and direct ESR spectroscopy data * suggest strong spin density on nitrogen. However! $\ce{NO2}$ radical is too stable for this simple interpretation, and same ESR data suggest that considerable spin density in NO2 is localized on oxygen atoms. This means that structures $\ce{O^. - N = O}$ and $\ce{O = N - O^.}$ also strongly participate.

Since no structure with unpaired electron in pi-system allows for a considerable spin density on nitrogen, it leads to conclusion that spin density is delocalized with participation of $sp^2$ hybridized lone electron pairs of oxygen, in particular ones opposed to the in-plane $sp^2$ orbital with the lone electron. This description is apparently in agreement wit MO treatment of $\ce{NO2}$. This IS counter-intuitive, since common organic sense is to put unpaired electron into $\pi$-system

15
Structure of NO2 compound?

3
Draw a simplified MO diagram for the pi system of Methyl vinyl ether
1
Hybridization of oxygen in Nitrate ion and the location/bond of nitrogen's lone pair
10
Hybridization of sulfur in sulfur dioxide
0
When finding hybridisation of atoms, why are double bonds and triple bonds only considered once?
2
Nitrogen Covalent Bonds
7
Why can't NH5 form?