Which of the following compounds has a zero dipole moment?

Only one of the options is correct

According to me, it looks like both options (c) and (d) are right. Since the dipole moments of option (c) molecule seem to negate each other (shown in the image below), so is option (d). However, only option (d) is right. Why?

The issue stems from the fact that you may not have understood what each bond notation means.

Here, the solid wedge indicates that the bond is toward us and so a 3-D view of the same molecule would look as follows: 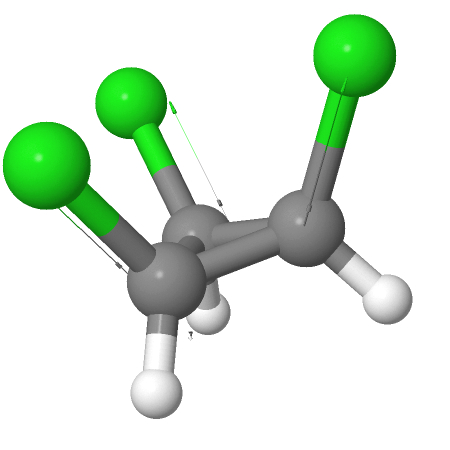 So as you can see the dipole moments – instead of cancelling, add up. So simply by elimination option (d) is the right answer

Therefore (d) is the correct answer and not (c).

In my opinion, instead of trying to cancel out dipoles, you should fall back to first principles and just do what you are effectively doing: using symmetry.

Every symmetry that the molecule has will be reflected in the dipole moment:

This immediately leads to a simple corollary:

So, in your example (d), can you find two symmetry elements?

The two symmetry elements are a plane cutting through the chlorines and carbons they are connected to, and a rotational axis going NW-SE for the molecule as drawn. The axis is perpendicular to the plane, so there is no dipole moment.

Thus certain combinations of symmetry elements mean that a molecule cannot have a permanent dipole, for example a $C_n$ axis and a perpendicular $C_2$ axis or perpendicular mirror plane $\sigma_h$. The point groups that cannot have a dipole are therefore are,(1) any group with a centre of inversion (i), (2) any D group ($D_n, D_{nh}, D_{nd})$ and (3) the cubic groups $T_d,O_h, I_h$.

Only molecule (d) has a centre of inversion so the answer is d.