Don't ask me why, but I did an experiment where I tried to remove the magnetic iron oxide layer from a floppy disk by soaking it in HCl for a week. I put pieces of floppy disk in 0 - 1 M HCl, then measured their absorbance at 700 nm. HCl concentrations at 400 mM or more were able to remove about half of the absorbance, but not more than that. 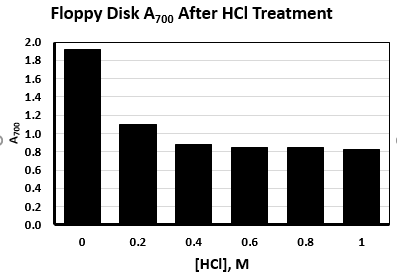 We can even visibly see the change in color intensity.

This suggests that something is preventing the acid from dissolving the remaining iron oxide, and that simply increasing the concentration beyond 1 M won't help. However, I can still scratch the surface and remove some of the color, suggesting that it isn't buried throughout the plastic film, but still accessible on the surface. But I don't want to spend forever scratching the iron oxide off floppy disks, so I would still like a simple chemical method to remove the metal. Does anyone have any suggestions for removing it?

I have to say thank you to Maurice for his suggestion to use more concentrated HCl. I took the same pieces of floppy disk that I used before and increased the acid concentration by a factor of 10 and let them sit for another week.

At first I was disappointed, because there was no visible change in the plastic or the solutions. But when I took the pieces out of the acid and cleaned them off with an alcohol soaked kimwipe, the remaining Iron Oxide came right off. It's not perfectly clean, most likely because I had taped the pieces into my notebook after the first treatment, and I didn't clean the tape residue off before the second treatment. This is also probably why the remaining absorbance at 700 nm is so variable. But I think this method works as long as I don't get the plastic covered in tape goo. The acid treated plastic also might feel a little less stiff than the 0 M control, but this is subjective. 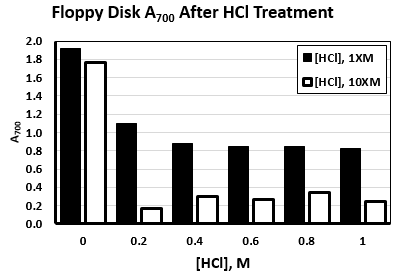 Not the answer you're looking for? Browse other questions tagged experimental-chemistry home-experiment or ask your own question.