Lately, as a matter of interest, I have been studying sigmatropic rearrangements. I came across the Fischer indole synthesis, whose Wikipedia article states:

The Fischer indole synthesis is a chemical reaction that produces the aromatic heterocycle indole from a (substituted) phenylhydrazine and an aldehyde or ketone under acidic conditions. ... The choice of acid catalyst is very important. Brønsted acids such as $\ce{HCl}$, $\ce{H2SO4}$, polyphosphoric acid and p-toluenesulfonic acid have been used successfully. Lewis acids such as boron trifluoride, zinc chloride, iron chloride, and aluminium chloride are also useful catalysts for this reaction.

The significance of the choice of acid catalyst to be employed in the reaction is beyond my scope of knowledge. Browsing available articles, it would seem that the [3,3]-sigmatropic rearrangement is stereoselective. In addition, if I am not mistaken, regioselectivity of the Fischer indole synthesis could be increased depending on which acid catalyst was used, such as methanesulfonic acid. However, I was still unable to understand the overall importance of using an appropriate acid catalyst.

I'd like to take this opportunity to give a nutshell review of the Fischer indole synthesis for benifit of future readers. This highly useful synthetic tool, which was named after the famous chemist, Emil Fischer who discovered it in 1883 (Ref.1 & 2)), is considered to be one of the best methods for preparing indoles. Hence, needless to say, it is the most widely used and versatile method for indole synthesis. The method simply converts converts ayrlhydrazones ($\bf{1}$) of an aldehyde or a ketone into corresponding indole ($\bf{8}$) in the presence of an acid catalyst (Ref.3 & 4). The overall reaction is depicted in the top box in following image: 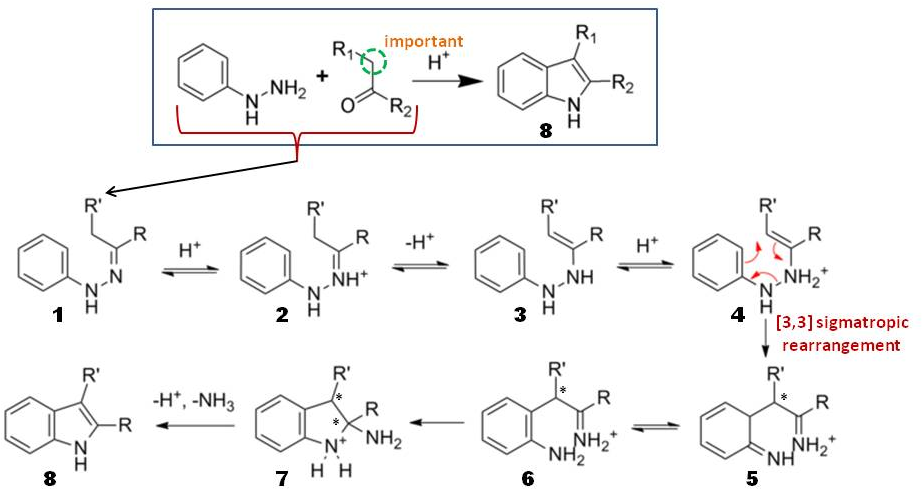 The proposed mechanism of The Fischer indole synthesis is also included for the convenience. As indicated, ayrlhydrazones ($\bf{1}$) are formed from a condensation reaction between an arylhydrazine and an aldehyde or ketone (reference to 2,4-dinitrophenylhydrazine test for aldehydes and ketones). In the presence of acid (Brønsted or Lewis), imine $\bf{1}$ is in equilibrium with $\bf{2}$ (protonated imine), $\bf{3}$ (enamine form), and $\bf{4}$ (protonated inamine). Once formed, $\bf{4}$ undergoes [3,3] sigmatropic rearrangement (ene-reaction; could visualize as azo-Cope rearrangement), forming a new $\ce{C-C}$ bond to give $\bf{5}$ (this is a key step of the mechanism). Imine $\bf{5}$ gains back aromaticity to form $\bf{6}$, which is the most stable isomer between two. The anilinic $\ce{NH2}$ of $\bf{6}$ attacks electron deficient imine group in the side chain ($\ce{C}$ of $\ce{CNH2+}$ group) intramolecularly to give the corresponding dihydroindole derivative, $\bf{7}$ (which is also another key step), which eventually release $\ce{NH4+}$, $\ce{NH3 + H+ <=> NH4+}$, to give stable indole derivative, $\bf{8}$. Reference 3 has given excellent review on the mechanism and hence, for benefit of interested reader, the PDF has been attached.

However, except for the situation to make $\bf{10}$, and the intention is making indole derivative of interest, the stereo selectivity at sigma-tropic rearrangement to give $\bf{5}$ and thereafter would not matter since at the end, all of stereocenters involved would be diminished (see the scheme above). Therefore, the choice of acid to get selectivity in general synthesis of indoles is not as important as it was told elsewhere. In reality, a variety of catalysts (Table I in Ref.3) have been used to effect the indolization of arylhydrazones. According to the Ref.3 (an excellent review of the Fischer indole synthesis):

Generally speaking, it may be said that acids and many compounds capable of complex formation with organic ligands may act as catalysts.

It is also worth noting that this reaction has proven very useful for the pharmaceutical synthesis of antimigrane drugs (e.g., Ref.8 & 9).

Not the answer you're looking for? Browse other questions tagged organic-chemistry heterocyclic-compounds or ask your own question.

51
Regioselectivity of acid-catalyzed ring-opening of epoxides
7
Synthesis via Sn2/Sn1, E2, E1: Choice of solvent
7
Choice of base for malonic ester synthesis
9
Why are protic acids not used for the formation of thioacetals?
5
Suggestion for a Synthesis of Paracetamol — plausible?
1
Choice of Lewis Acid for EAS reaction