In 7th class I was been taught that in an atom, electrons revolve around shells and the electrons with higher energy level are placed likewise in the shell above of that electron: 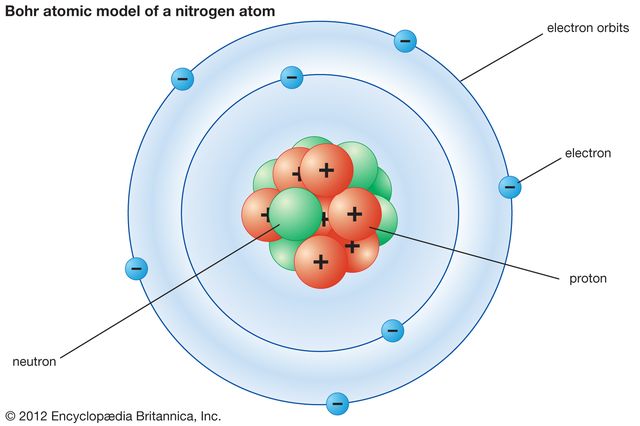 In 11th class I have been taught that electrons in atom are found in orbitals within shells. But I am finding it difficult of how to visualise this electrons within shells with different energy level. Can you provide me a simple way of visualising this atomic model? As I know the atom seen through microscope is too complicated.

This sentence is perhaps the source of all problems. Atomic structure has a history of 100 years. Best minds of the world spent their life in trying to understand atoms. The problem is that in the sub-atomic world, good teachers will teach you not to make a literal picture of anything. Unfortunately, this is not the case in schools, colleges and early university classes. Often a literal picture is presented.

If we were by some magical or miracle slice see the atoms and the electrons, you may not see a particle going around a nucleus or the electrons arranged like onion rings around the nucleus. Forget about all these imaginations.

Contrary to the common opinion, orbital was not coined by Schrodinger. Robert Mulliken (another Nobel laureate) proposed this term.

An orbital is not a physical object or structure inside an atom, no matter how many useless general chemistry books or websites show them as balloons and other drawings. Even leading journals fell prey to this non-sense saying that orbitals have been observed or imaged, only to be embarrassed later. Orbital is a short form name of "one-electron orbital wave function". It is a mathematical construct which exists on paper and in the mind of a physicist.

Roughly you can imagine orbital as a pattern of electron density around a nucleus. But again, there is no actual " cloud" of an electron surrounding the nucleus (if we were able to see it). Do not take the small world of particles in a literal sense. Much is known and much more is not known.

The only real thing which one can perhaps observe is electron density using X-ray techniques. Electrons are indistinguishable particles. You cannot say this is a K-shell electron or P-shell electron. What is available experimentally is that not all electrons have the same energies when they are bound to the nucleus.

An atom cannot be seen with a microscope, using ordinary light. Grains of light, also called photons, are simply too big to give an image of atoms. As it is difficult to understand for beginners, I could use a simple image.

Imagine you are living in a cavern like our ancestors, the prehistoric men. To draw a hand on the wall of the cavern, they filled their mouth with wet charcoal powder, and they spit this black mixture on the hand against the wall. They obtain a black-and-white image of the hand. If they had used pingpong balls or basket balls, instead of charcoal powder, they would never have obtained an image. These balls are simply too big to pass between the fingers.

It is exactly the same for us. Photons from usual light are too big to allow us take an image of the atoms. Much smaller photons are needed. For example, photons from the X-rays are small enough to allow a photographe of the atoms, But these X-rays are not part of the usual spectrum violet-blue-green-yellow-orange-red. So, unfortunately we will never develop a microscope which could show us atoms with ordinary light.

Now, to go back to your question, the first scientist to give a description of the electron in an atom is Niels Bohr. He proposed that electrons are turning around the nucleus like the planets around the Sun. He made calculations about the mass, the charge, the speed of the electron turning around the Hydrogen nucleus, and the distance electron-nucleus. These calculations give good results with the Hydrogen atom when compared to energies and distances as measured by X-ray or similar techniques.

So this theory was soon extended to other atoms giving electrons rotating on circular orbits as you know. But the calculations made with other atoms gave results that are not so good. Qualitatively they are good enough to make drawings like the page you mentioned, where electrons are like planets. It allows to show nice description of molecules, using Lewis method. You probably know these drawings, with dots and bonds.

Today we think that electrons are not turning. They "exist" on sorts of clouds, called orbitals, centered around the nucleus, and whose average center of mass is near the nucleus for the first electron, so that the elctrons are more and more repelled away from the nucleus, when an atom has a lot of electrons. Alas, this description is not easy to visualize. That is why high school chemistry is still often taught with the old Niels Bohr theory, although it is not perfect. Showing the shape of these orbitals in 3 D is not easy to do at a high school level.

Not the answer you're looking for? Browse other questions tagged quantum-chemistry atomic-structure or ask your own question.

37
How do I visualize an atom?

10
What actually is the Wavefunction?
1
Relationship between Energy Level and electron position
2
What facts are being used in this atomic structure question?
1
Maximum number of atoms in the ground state
7
How is the potential energy between two atoms measured?
1
Why does the Most Stable State of an Atom Tend to be One with Full s and p Subshells?