Why is the first ionization enthalpy of molecular O2 less than atomic O?

A cousin of mine asked for my help to answer one of his homework questions. It stated-

It took me some time trying to find out perfect reasons for it, because generally, bonded electrons are harder to remove than valence electrons in atoms. But indeed, not just with $\ce{O2}$, but $\ce{F2}$ ($\pu{1515 kJ mol​-1}$) also has a first ionization enthalpy lesser than atomic $\ce{F}$ which is $\pu{1681 kJ mol​-1}$. (I wonder why there aren't any more talked of!). So I ended up taking a "class" on the basics of MOT, trying to reason that "the energy required to remove an HOMO electron from an ABMO in $\ce{O2}$ is lesser than removing an electron from a bonding orbital. That could probably lead to this anomaly."

But this wasn't convincing enough for me. I could sense a lack of conviction, a whole list of factors that could go wrong, also with the possibility of a much simpler explanation. But what made me post it up here, despite its dubious look, is the lack of convincing information addressing this issue even on the internet. Hence, a proper answer would be helpful for the community at large.

A cousin of mine asked me to share her answer here: 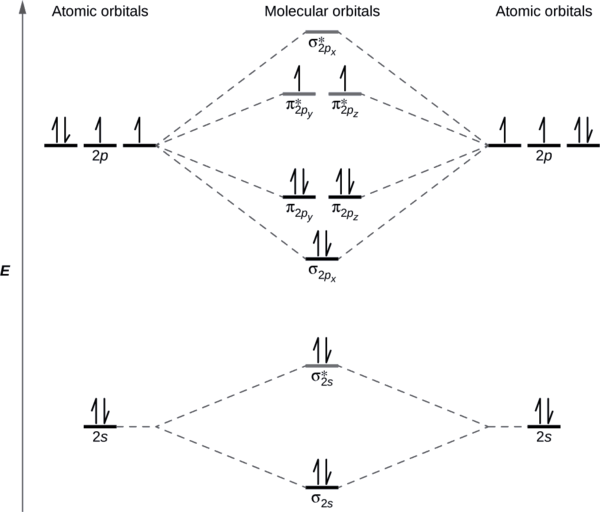 In the molecular orbital diagrams shown in textbooks, the highest occupied molecular orbitals of $\ce{O2}$ and of $\ce{F2}$ are shown as antibonding. If the molecules and their cations had the same bond length, and the electrons in a species didn't "talk to each other", and the orbital energies of an isolated atom were not influenced by the approach of another atom, you could predict that the ionization energy of the molecular species is lower than that of the atomic species. The argument would be that these HOMOs have higher energy than the corresponding atomic orbitals (see comments to question).

As these assumptions are not quite true, it is more complicated, but luckily the quick and dirty analysis yields the correct answer.

To get a rationale for the ionization energies in a quantitative manner, you could calculate the energies of the four relevant species ($\ce{O, O+, O2, O2+}$) and look at the differences.

Not the answer you're looking for? Browse other questions tagged physical-chemistry molecular-orbital-theory enthalpy ionization-energy or ask your own question.