Why are amidines so much more basic than amides?

Both delocalize the added proton. Is it because the bond lengths in amidines are the same, or perhaps because oxygen is more electronegative than nitrogen and thus is more reluctant at keeping the proton? But how can that explane the huge difference in basicity between amidines and amides (resp $12$/$13$ versus $-1$/$0$ of $\mathrm{p}K_\mathrm{aH}$)?

Here is a diagram comparing what happens when we protonate an amide and an amidine. 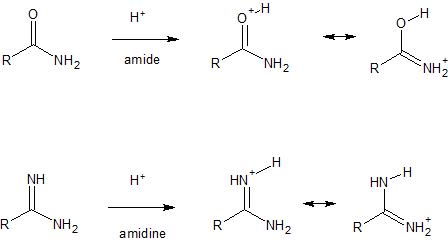 4
Why are amidines more basic than amines?
2
Which one is more basic: acetamide or aniline?

5
Why is the alkene a more stable species in this case?
3
Why is ethanoic acid more acidic than phthalimide?
4
Why is ammonia less acidic than terminal alkynes?
4
Why are amidines more basic than amines?
0
Reaction of urea and thiourea with nitrous acid
0
Adding cyanide vs nitrite for nucleophilic substitution and why does it change when we use silver salts for it
3
Why is the carbon monoxide triple bond stronger than the nitrogen-nitrogen triple bond?