But what are anti-bonding pi-orbital? In search for an intuitive explanation [closed]

Imagine that you want to explain to an undergraduate why they have to to shade the pi-orbitals in a symmetrical way, i.e. dark on top (+), white on bottom (-) for two neighbouring pi-orbitals because they are bonding (or anti bonding), but then the student asks: why?!.. Can anyone explain why this is without knowing about quantum mechanics and diving into molecular orbital theory? Intuitively, it makes no sense that an electron should 'care' why if they are 'on top' or 'on the bottom' of the nucleus.

I have a hard time both intuitively understanding, but also explaining why we care about bonding and anti-bonding orbitals. I know that I should draw them, and that one is stabilising while the other is destabilising. However, for a person with limited chemistry knowledge my reasons for why is simply: 'because it is so'. This is not very satisfying. I think this has something to do with the phase and wave equations (..etc) - but again,..this seems to go into heavy chemistry (..or?).

Question: Does someone have a nice analogy, or way of explaining why this is - and what anti-bonding orbitals are without any very high-level chemistry concepts?

I think there are others struggling with this concepts, as I found a few questions here on stack exchange that failed to give a satisfying answer. This might be because the concept is extremely complexes and not possible to understand without quantum mechanics... but thats why I want to ask the question here in hope of an intuitive explanation.

First, remember that the + and - on the lobes of an electronic wavefunction do not ever represent or suggest electronic charge. An electron is always negative; a proton (or nucleus) is always positive. In order to imbed this firmly in your mind without + or - signs, imagine one lobe of a p-orbital flashing red while the other flashes blue. In this picture, an s-orbital would flash either red OR blue.

Plus and minus signs are just the way mathematicians describe the orbitals: they don't use red and blue pens, they use + and -. Now take the orbitals and move them about. Wavefunctions have a wave nature; waves have a frequency; so two orbitals of the same kind on similar atoms will have the same frequency. Two hydrogen s-orbitals flashing red at the same frequency look like one object, that is, they seem to be bonded into a hydrogen molecule (if they are close enough). Their waveforms are constructive.

But if one flashes red while the other flashes blue, the picture is not so attractive - the individual atoms are not in sync, not bonded. If I now switch the metaphor to a musical (audio) frequency rather than a visual wavelength, the idea of wave addition or neutralization images better (see picture). 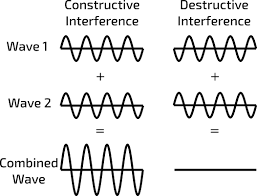 To clarify, the red and blue orbitals don't totally collapse each other and disappear - just where they might "touch". So each orbital, red and blue, still contains one (negative) electron, but there is no continuity of electron travel from and around one nucleus to the other, because there is a gap, a node, a location where there is no electron density, where they might come in contact. This represents two atoms that have been dissociated from their bonded state as a molecule. They could have been bonded together using two red-flashing orbitals, but got excited by some energy input that brought one electron up to a blue energy which is now out of sync with the red orbital, and finds it repulsive. A $pi$ bond between two carbon atoms would show the two upper lobes of each atomic orbital to have the same color and the two lower lobes of each atomic orbital to have the other color: both upper and lower regions would be bonding. A $pi$ antibond would have a red and a blue in the upper region and a blue and a red in the lower region: repulsive!

So we usually show the direction of bonding or repulsion in bonding or antibonding molecular orbital by using + and - signs on the atomic (and molecular) orbitals, saving red and blue colors for PowerPoint presentations. 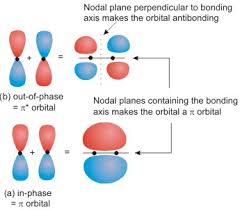 Not the answer you're looking for? Browse other questions tagged organic-chemistry bond electrons orbitals valence-bond-theory or ask your own question.

6
Why do higher orbitals have more energy?
2
Anti-bonding molecular orbitals
1
Why is the antibonding pi bond higher in energy than the normal pi bond?

6
Bonding and anti-bonding orbitals in the light of time-dependent Schrödinger equation?
6
Bonding and Antibonding
10
Properties of f-orbitals
3
Molecular orbital theory and the conservation of molecular orbitals
59
Why is it wrong to use the concept of hybridization for transition metal complexes?
2
Orbital size of Carbon and Oxygen in Methanal
0
Average energy concept