Why does ethylamine have two infra-red spectra? Are both correct?

The one I have in my textbook is this: 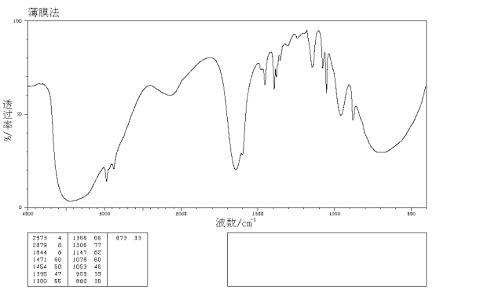 The other one I found on Google: 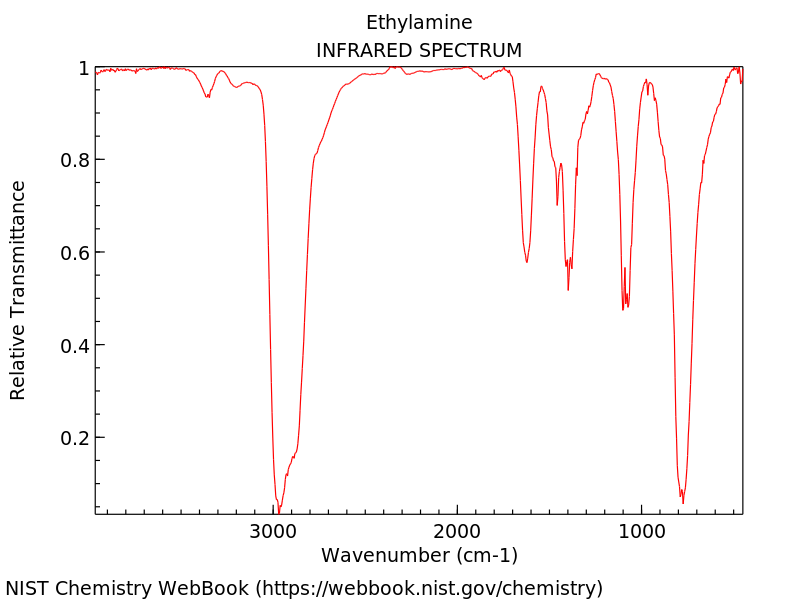 Can anyone explain those spectra for me? Are both correct? I'm very confused.

When looking at IR spectra of hydrogen-bonding groups, always check how IR spectra was recorded. It appears that NIST spectra is recorded using gas phase, while the first one used liquid film. In liquid film $\ce{NH2}$ groups form a network of hydrogen bonds, resulting in shape distortion and widening of $\ce{NH2}$-related bands. Same is true for carboxylic acids, alcohols, phenols, and many other group. Comparison of water spectra in ice, liquid and gas is particularly enlightening.

If the spectrum is recorded in a solution, you also have overlapping spectrum of the solvent in your recording. If you look at water spectrum in liquid phase (nist webbook), you can see some wide peaks suspiciously similar to wide bands in the first spectrum you posted, so it might be that 'liquid film' is actually a water solution. In this case the situation is even worse, because in addition to ethyl amine spectrum you also have overlapping ethyl ammonium spectra.

Honestly I have doubt about your textbook version of IR spectrum. However, I can suggest by the experience I have gained that the shapes of the peaks depends on the method you have used to obtain the spectra such as ATR, smear, absorbed in inert surface, etc., thus cannot pinpoint which one is incorrect. Yet, you can compare an one with other related amines. The following shows the comparition of two spectra of ethyl amine (your google finding) and of butyl amine (from this site). I make the points $\pu{3000 cm-1}$ and $\pu{1000 cm-1}$ coincide for comparition purposes: 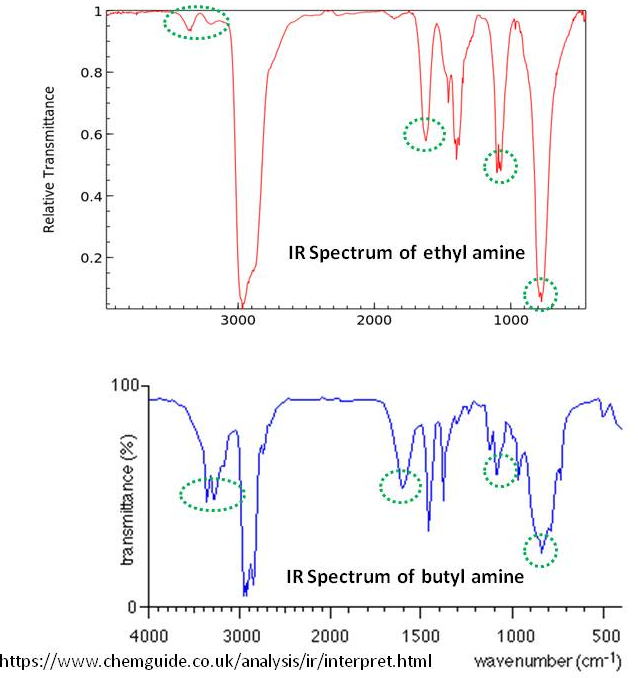 For instance, $\ce{NH2}$ group of primary amines absorb somewhere between $3100$ and $\pu{3500 cm-1}$ ($\ce{N-H}$ stretching). That double trough (typical of primary amines) can be seen clearly on the spectrum to the left of the $\ce{C-H}$ streaching absorptions (around $\pu{2900 cm-1}$). Thus, the spectrum you found in google is seemingly correct comparing aforementioned peaks and other overlapping peaks in fingerprint reagent.

Not the answer you're looking for? Browse other questions tagged organic-chemistry everyday-chemistry experimental-chemistry spectrophotometry ir-spectroscopy or ask your own question.

2
What type of isomers are cis-but-2-ene and 2-methylpropene?
3
Product of the addition of 1 eq. bromine to 1-methylcyclohexa-1,4-diene
5
Relative basicity of cyclic amines
1
Enol form of acetone is treated with D2O
0
Could dimerization account for weak IR signals?
2
Lack of elaboration in IR spectra of compounds