Why did ammonium chloride fumes turned pink in this synthesis?

I was watching the synthesis of tetrasulfur tetranitride performed by Tom on his Youtube channel, Explosion & fire. He followed the basic route: adding ammonia gas to sulfur chlorides ($\ce{SCl2}$ and $\ce{S2Cl2}$). At first, everything was going normal, purple-black precipitate on the flask with white $\ce{NH4Cl}$ fumes emitting as expected and white $\ce{HCl}$ fumes resulting from hydrolysis of sulfur chlorides. But suddenly a problem occurred. The fumes turned pink. The following is a sequence in chronological order (snapshots from his videos; temperature of ppt. in brackets): 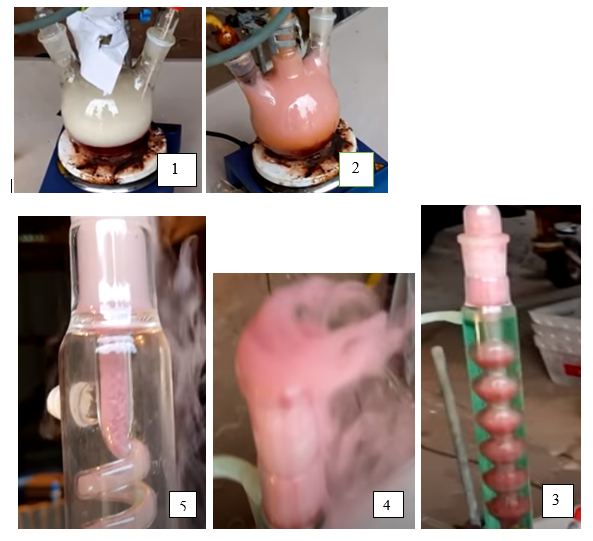 Eventually, after so much fuming and snowing, the end-product was achieved (when fumes turned golden brown, the original color of $\ce{S4N4}$). So, why did ammonium chloride fumes turned pink (when it was evolving)? Is it due to the compounds in the precipitate? If so, what species could have caused that color?

I did some research and found out that $\ce{S4N4}$ is thermochromic(changes color according to temperature). From britannica:

There is no mention of $\ce{S4N4}$ turning pink, so I proposed pink to be an intermediate color (orange -> pink -> red) and since it is a volatile compound, it was turning the fumes pink. But if the compound was pink, why did it later turn golden-brown, the original color of $\ce{S4N4}$? The precipitate was a purple-brown-black sludge, so it was definite not the end product. Thus my proposal contradicts.

Tetrasulfur tetranitride is prepared by dissolving 1 volume of sulfur dichloride in 8 or 10 volumes of carbon disulfide, cooling, and passing in dry ammonia gas until the dark brown powdery pre­cipitate which forms at first has dissolved and an orange-yellow solution results which contains light-colored flocks of ammonium chloride.

Here, there is no mention of pink. What species could have caused fumes to turn pink in color?

I recommend to watch the synthesis in details on his second channel, Extraction & Ire: Part 1 and Part 2

That is why the fumes of $\ce{NH4Cl}$ turned pink

Not the answer you're looking for? Browse other questions tagged inorganic-chemistry experimental-chemistry synthesis color or ask your own question.

5
How to extract elemental bismuth from pepto bismol?
2
What is this colorless ferric solution?
4
Problems with precipitation of transition metal solution
18
Iron chemistry: acetates for ebonizing wood
3
Wohler synthesis: magnesium cyanate + ammonium chloride?
6
Why so much color change in synthesis of triphenylmethanol?
15
What can this chemical be? (Qualitative Analysis)
3
Bleach turned towel bright pink before fading to white
1
How can I dissolve a precipitate when stuck to the side of a boiling flask