Which alpha Hydrogens are more acidic?

I was under the impression that acetoacetic ester has more resonance structures so it more acidic.

The more electron deficient the conjugated system is, the more stabilized carbanion becomes, thus the less resonance structures with transfer of the charge onto carbonyl oxygen the group has, the more it stabilize carbanion. Thus, $\alpha-CH$-acidity in carbonyl compounds correlates with electrophilic activity.

The reason is that negative charge from deprotonated carbon must be delocalized as much as possible, which is especially easy with strongly electron-accepting groups. In case the compound already has an electron pair conjugated with carbonyl group, this is more problematic.

Here is a picture of the basic reaction we are talking about.

We can see that we wind up placing a negative charge alpha to the carbonyl carbon. When we examine how substituents in various positions will affect the acidity of protons alpha to a carbonyl group, we must look at how both the inductive and resonance effects exerted by the substituent will stabilize or destabilize a nearby negative charge.

In the above chart we see that by attaching a $\ce{CF3}$ to a carbonyl we make the alpha-hydrogens very acidic. This is because the $\ce{CF3}$ group is inductively extremely electron withdrawing and this effect acts to stabilize the negative charge alpha to the carbonyl. A methyl group is electron donating both inductively ($\ce{sp^2 - sp^3}$ bond) and via resonance (hyperconjugation), so the alpha-protons in this case become less acidic. Attaching an $\ce{OR}$ group to the carbonyl will stabilize the negative charge inductively since the oxygen is electron withdrawing, but we can now also draw resonance structures involving the $\ce{OR}$ and carbonyl groups that are electron donating to the carbonyl.

The resonance effect is larger and outweighs the inductive effect. The net result of donating electrons and moving them closer to the negative charge destabilizes the adjacent negative charge. Hence the ester is less acidic than the previous compounds. Applying the same reasoning to an amino group leads us to conclude that here the stabilizing inductive effect is even further decreased and the destabilizing resonance effect increased, both because nitrogen is less electronegative than oxygen. These same arguments can be applied to simple carbonyl compounds as well as the 1,3-dicarbonyl compounds used here as examples.

When you remove the α-hydrogen, you get the following structures: 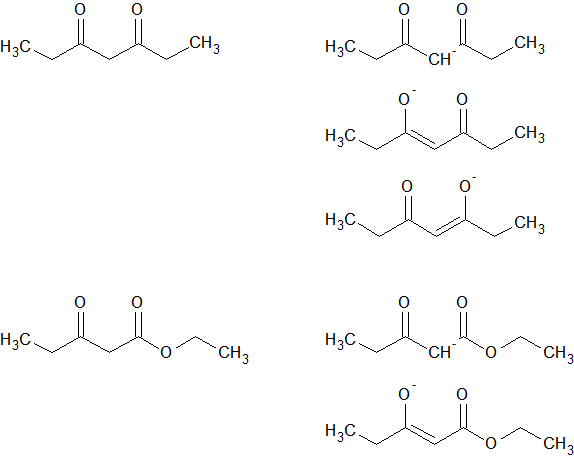 I believe the carbonyl of the ester doesn't contribute (as much) to the stabilization since it already has some stabilization with the ester oxygen. Also the dicarbonyl tends to be flat due to Van der Waals forces. The ester group has the ability to rotate, which would inhibit stabilization.