Why does the Wurtz reaction form such an unstable compound with torsional strain?

What would be the product formed when 1-bromo-3-chlorocyclobutane with two equivalents of metallic sodium in ether?

I know that there would be a free radical formation and then it will form a compound whose bond line structure would look like a square with a diagonal.

But why is such an unstable compound being formed as there is a lot of torsional strain?

In the Wurtz coupling reaction, an alkyl halide first reacts with a metal in a one-electron transfer step to produce an alkyl radical which quickly reacts in a second electron transfer with the metal to form a carbanion. In the final step of the reaction, the carbanion displaces a halogen from a carbon-halogen bond by a $\ce{S_{N}2}$ process to form a carbon-carbon bond. In the case of 1-bromo-3-chlorocyclobutane two reaction pathways are possible, the carbanion could react intramolecularly to form bicyclobutane or intermolecularly to from a cyclobutane dimer. Considering the equation $$\ce{\Delta G = \Delta H - T \Delta S}$$ we would say that even though the $\ce{\Delta H}$ term is less favorable for bicyclobutane formation due to the increased ring strain, the change in entropy required to bring two separate molecules together to form the cyclobutane dimer overwhelms the enthalpic term and drives the reaction to proceed by the entropically more favorable intramolecular process.

Look at the cyclobutyl carbanion drawn in the figure below. The carbanion is ideally set up for an intramolecular $\ce{S_{N}2}$ reaction (backside displacement) on the carbon containing the chlorine diagonally situated across from it. Entropically, this is extremely favorable.

Considering the torsional strain; the maximum relief will be in the bottom most molecule[Note that there may be other possible products from various combinations]; but from top to bottom as you can see, you require more and more molecules and thus there will be a huge loss of entropy; but as$$\Delta G=\Delta H-T\Delta S$$ ;If the tempertaure is not low, so as to reduce effect of $\Delta S$, we can thus expect without a loss of entropy and by formation of an intramolecular product; it is favorable.Note that generally this is the case with intramolecular reaction favourability

Also what you mention "I know that there would be a free radical formation and ..."; this is not true, or I must say partially true, because wurtz reaction can be explained both on the basis of radical and bimolecular elimination mechanisms. 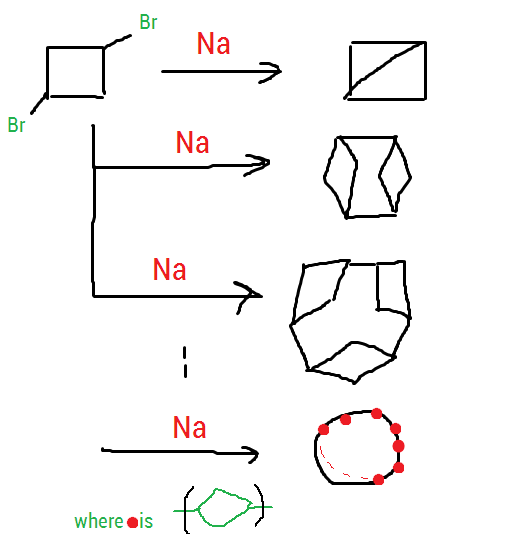 8
Ring closure via intramolecular nucleophilic substitution or intermolecular dimerization: which is favoured?

4
Why are tertiary alkyl halides obtained in higher yield than secondary or primary during free radical halogenation of alkanes?
7
Mechanism of a cyclization reaction - why does an enol ether form?
7
What will be the possible major product(s) on heating this primary alcohol i.e. 9-fluorenylmethanol with (conc) H2SO4?
6
Is E1cB possible in the reaction of cyclopentadiene with acetone in presence of ethanolate?
9
Mechanism of DPD (N,N-diethyl-p-phenylenediamine) reaction with free chlorine
9
Kolbe Schmitt followed by methylation