Safest way to conduct a reaction with bromine under reflux conditions

I am conducting an electrophilic aromatic bromination reaction according to literature. The substrate and intended substitution pattern do not matter, but the reported procedure requires the dropwise addition of bromine at room temperature followed by refluxing overnight. (The solvent’s boiling point is very close to bromine’s so it may be assumed that both compounds reflux.) The reaction is not conducted under inert atmosphere and as with every organic bromination I expect HBr to be a (gaseous) by-product.

Obviously, the reaction is being conducted in a fume hood whose front opening is closed as far as possible. Nonetheless, I want to limit the amount of bromine vapour that gets released into the surrounding atmosphere. I came up with the following setup: 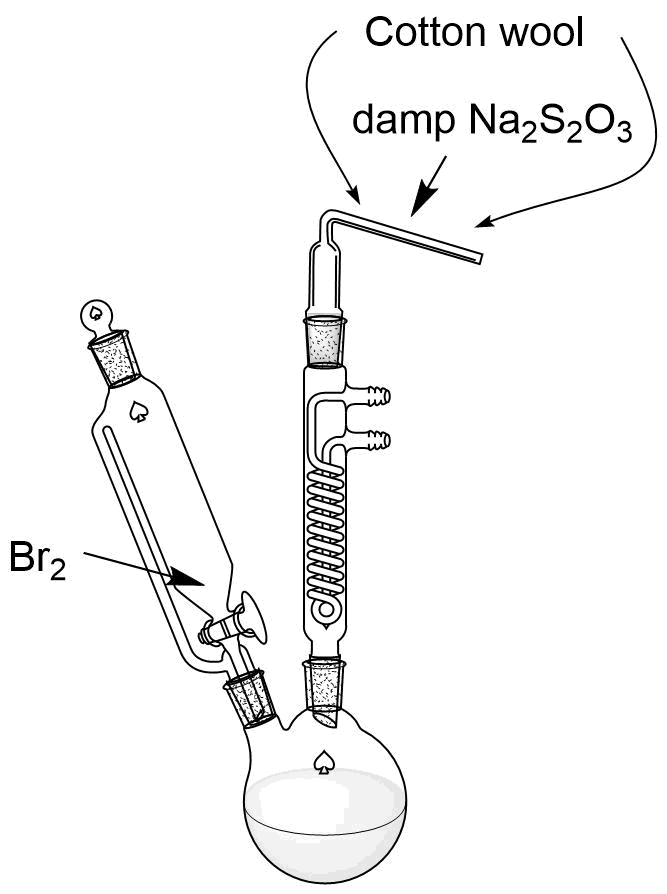 Figure 1: A two-necked flask with a dripping funnel and reflux condenser. The glassware on top of the reflux condenser should be a drying tube (no accurate clip-art was found) containing damp $\ce{Na2S2O3}$ between cotton wool.

The dripping funnel is obviously used to add bromine dropwise to the reaction mixture and is sealed on top. The reflux condenser is open to the atmosphere through a drying tube; I filled the drying tube with sodium thiosulphate to quench any bromine vapour that makes it up there.

I did not attach the coolant flow to the reflux condenser until after the dropwise addition. This may have been a mistake, as bromine vapours had already diffused all the way up and penetrated the cotton wool and thiosulphate. It seems that these were far less effective in holding back any vapour than I had anticipated. Luckily, our coolant system is closed-circuit and the temperature adjustable. Thus, I set the cooling temperature to $\pu{0 ^\circ C}$ which seemed to reduce bromine’s vapour pressure sufficiently to clear the air in the drying tube. However, I believe there must be a better solution.

How can I run this reaction in reflux conditions while preventing bromine vapour escaping as much as possible? I had thought of sealing the entire reaction apparatus, but the reaction gives a gaseous side product (HBr) which could cause an undesired increase in pressure. I had also considered using a balloon to close off the reaction atmosphere, but I fear that both bromine and HBr will react with the rubber and destroy the balloon rapidly. What other methods exist that I may have missed?

Side note: the literature I am following was published in 1987. As expected of this era, they do not note specific precautions against bromine release.

Check if you may skip using elemental bromine as starting material altogether. An alternative approach may be running the bromination in a heterogenic, biphasic setup with the couple $\ce{NaBrO3/NaHSO3}$ in water (e.g., 1998JOrgChem6023, 2000OrgProcRes Dev.30), or $\ce{NaBr}$ / sodium perborate (e.g., 1998SynthCommun925), or pyridinium tribomide (e.g.,2005JChemEduc306), or bromodimethylsulfonium bromide prepared by mixing aqueous $\ce{HBr}$ with DMSO (1997JOC4321, often at rt). They share a slower release of bromine, and because of this, lower amount and concentration of reactive bromine and attenuate the hassle with corrosive gases.

If staying with liquid bromine:

Not the answer you're looking for? Browse other questions tagged safety equipment halogenation .

12
What would be an appropriate way to clean up equipment contaminated with ethidium bromide?
2
What happens in the NH4Cr2O7 with HgSCN reaction?
5
Preparing an inert atmosphere reaction vessel with only an input?
2
Is there a way to counteract the problems with weighing hot objects?
5
Mechanism with hypohalite in haloform reaction