Is it possible for already charged metal ions to form a metallic bond? [closed]

I would like to know if it is possible for already charged metal ions to become part of a metallic bond.

It would be very helpful if someone could provide a link for citation about whether or not charged metal ions can become part of metallic bond since I could not find anything explicitly ruling out that possibility.

Your reasoning is correct. Such things do exist, and they came to be known as clusters. The link above does not quite do them justice; in fact, they are vastly more numerous and diverse.

Come to think of it, the clusters go beyond the scope of your question, in that many of them are not charged. To pick a few examples, see the osmium carbonyl (which, arguably, is too small to consider the bond really metallic, but its bigger brothers are known), or gold clusters which range all the way up to the immense five-layer icosahedron $\ce{Au561}$ with some ligands on top.

To pick something charged and at the same time big enough to be called metallic, have a look at this: $\ce{Ta6Cl18^4-}$. 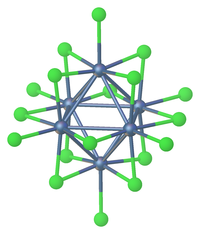 Upd. I thought I'd better stress this again. Yes, metal ions that still have some valence electrons can use those to form bonds, given the right circumstances. Whether those bonds qualify as metallic is a different question altogether, and depends on the number of atoms (or ions) in the cluster. Two is clearly too few. You can't possibly have a metallic bond between two atoms. A bond with electrons delocalized between two atoms is called covalent. That's the case of $\ce{Hg2^2+}$. Then you have clusters with 3 atoms, then 4, and so on, all the way up to 100 and beyond.

Not the answer you're looking for? Browse other questions tagged bond metal or ask your own question.

5
Do you break the metallic bond when you break a metal into two pieces?
2
Why are there free electrons in a metal?
4
Is ionic bond just formed by “electrostatic” interaction between two oppositely charged ions?
1
Metallic Bonding
11
Gaseous metals?