For IUPAC nomenclature, does the number of multiple bonds take precedence over the chain length?

I've received a few mixed answers to this question. Some sources say when determining the parent chain for unsaturated hydrocarbons, the longest chain should be considered before the chain with the most multiple bonds, for example:

While others say what appears to be the opposite, such as this excerpt from Wikipedia:

The steps for naming an organic compound are:
Identification of the parent hydrocarbon chain. This chain must obey the following rules, in order of precedence:

Would be great if I were to receive clarification regarding this.

Note that the new IUPAC recommendations (Blue Book in 2013) on order of chain length and number of multiple bonds have been changed (You can find more details here and here):

In acyclic parent structures the order of seniority between unsaturation and length of chain given in earlier recommendations is reversed. Thus, the first criterion to be considered in choosing a preferred parent acyclic chain is the length of the chain; unsaturation is now the second. 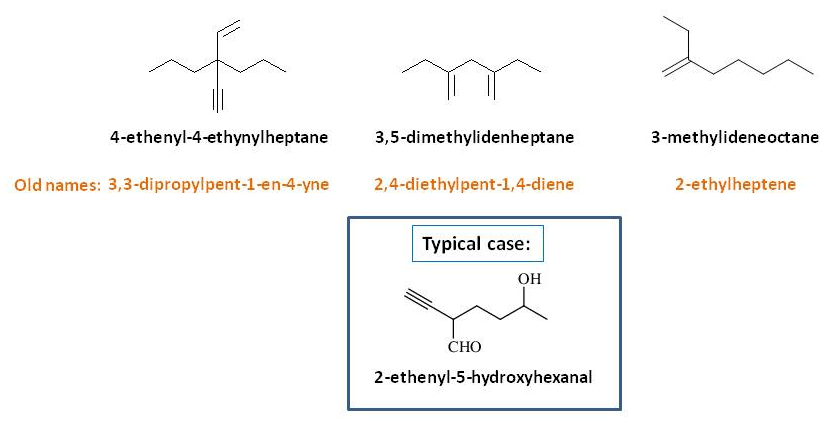 In all first three structures, the longest chain has chosen over the multiple bonds (the old names are in orange). In the typical case, the principle group is $\ce{-CHO}$ and hence hence to hexanal is the principal structure which has $\ce{-OH}$ substituent and longest chain. Thus, the name is 2-ethynyl-5-hydroxyhexanal.

Not the answer you're looking for? Browse other questions tagged organic-chemistry nomenclature molecules hydrocarbons or ask your own question.

9
“Tie-breaker” rules for IUPAC nomenclature of organic compounds
9
IUPAC naming - choosing the main branch
6
Preferred IUPAC names for branched unsaturated hydrocarbons (polyenes)?
1
Order of priority for including functional groups in the parent chain compared to order of priority for numbering the parent chain
2
Omission of locants for functional groups in IUPAC names
5
How to select the parent chain in mechlorethamine?
1
Nomenclature of aldehydes with double bonds and stereoisomerism