Beginning with a reference to a well known question.

Order by reactivity towards SN1 reaction.

According to some facts about SN1 reactions, rate depends on:

If we consider point $1$, this rounds down the above question to a previously asked question.
Unfortunately the second answer to the above question raises doubt about the validity of the first in all cases. (The kinetic and thermodynamic stability)

Since my question is a bit different and asks about SN1 reaction I would propose considering the following:

Since the C+ structure resemble the following :

So, to sum up my question, considering the above points can I say that the rate of reactivity towards SN1 will be greater for the second compound, i.e. $\ce{C3H7Cl}$?

Opposition or Alliance if also supported by experimental evidence would be more helpful.

Additional recurrence in the form of questions in tests or books:

The question is as follows, the objective being to find product B: 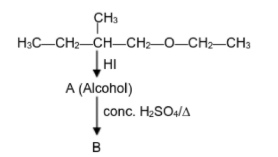 Consider the following assumptions to somehow force these substrates to proceed for $\ce{S_N1}$ reaction mechanism:

Now, in an $\ce{S_N1}$ reaction, the formation of carbocation is must.

The primary factor that determines the reactivity of organic substrates in an $\ce{S_N1}$ reaction is the relative stability of the carbocation that is formed.$\ce{^1}$

According to your linked question: 1-propyl cation would likely be more stable than the ethyl cation.

Hence, your deduction that "the rate of reactivity towards $\ce{S_N1}$ will be greater for the second compound, i.e. $\ce{C3H7Cl}$" is correct.

P.S.: The 1-propyl cation can rearrange itself to a more stable 2$\pu{^o}$ carbocation, but that is not part of RDS to decide the reactivity order.

28
Which carbocation is more stable, the ethyl- or 1-propyl-carbocation?

0
Reactivity order in hydrogenation reaction of but-2-yne and butene isomers
0
How good is aromaticity at stabilization?
3
Does hyperconjugation into sigma-star explain methylamine's increased basicity relative to ammonia?
10
Is isobutyl chloride or ethyl chloride more reactive in an SN1 reaction?
0
Hyperconjugation, stability of molecules, and heat of formation
7
Steric effect of t-butyl group on SN1 on a cyclohexane ring
7
Does a reaction proceed through SN1 if rearrangement results in a stable carbocation?
2
Effect of distance on the mesomeric effect