I have searched the whole internet but I could only see examples where the authors of the article took $\ce{R1}$ and $\ce{R2}$ as the alkyl groups around the carbon.
This is regarding the oxidation of carbonyl compounds (I am specifically searching about ketones) using $\ce{SeO2}$.
What I understood was $\ce{C=O}$ got introduced on the alpha-carbon and two hydrogens from that carbon were lost.
I would like to know the product obtained on reacting pentan-2-one with $\ce{SeO2}$. Will the carbon having 3 alpha-hydrogens become $\ce{C=O}$ or will the other one having 2 alpha hydrogens become $\ce{C=O}$?

The mechanism of Selenium Dioxide (Riley) oxidation proceeds via the enol tautomer of the ketone (see scheme - image from Wikipedia). If the ketone is assymetric and can enolise to either side then the reaction should give the two di-ketones in proportion to the amount of either enol formed though I cannot find any reference where this has been experimentally demonstrated. In the OP's case of 2-pentanone, a mixture of the two possible products will be formed. 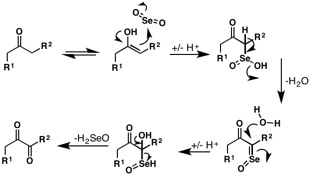 26
Why doesn't the SeO2 oxidation of ketones stop at the hydroxyketone stage?

16
What is the mechanism for oxidation of ketones by the Popoff's rule?
26
Why doesn't the SeO2 oxidation of ketones stop at the hydroxyketone stage?
0
Reactions of ketones and aldehydes
5
Why aren't methanal and ethanal also ketones?
3
Wavenumbers of cyclic ketones
0
Baeyer-Villiger Oxidation restricted to Ketones
0
Major product in reaction of butan-2-one + selenium dioxide