Hi a question about supporting electrolytes (SE) I hope you can help with. I found some related questions here through searching but looking for a simple answer (if there is one!):

If SE are electroinactive (in the potential range of interest) and so do not pass or receive electrons at the electrodes to complete the circuit then how to they "increase conductivity"? I am referring to typical DC experiments, e.g. chronoamperometry. It's not like electrons hop through the solution from one electrode to the other using SE ions as a shuttle.

I understand that one role is that they migrate to the opposite electrodes to neutralize ion charge imbalances that would build up due to reagent consumption or product generation from the electroactive species you are measuring (e.g oxidizing an enzyme product), thereby facilitating these redox reactions that do occur to continue. Is this the answer? So in just water + SE, for example, it is more conductive because they facilitate the electrolysis of water (H2 and O2 generation (e.g for SE without Cl-) by this method?

I also understand that movement of ions is considered current, but with DC wouldn't this migration slow down and exhaust as time went on? Is it this transient conductivity due to ion movement that they refer to?

Thanks for your answer Maurice. What you describe sounds like this (maybe not clearly written) part of my own possible answer to my question: "I understand that one role is that they migrate to the opposite electrodes to neutralize ion charge imbalances that would build up due to reagent consumption or product generation from the electroactive species you are measuring, thereby facilitating these redox reactions that do occur to continue".

I think my confusion arises because the IUPAC definition is: "A supporting electrolyte, in electrochemistry is an electrolyte containing chemical species that are not electroactive (within the range of potentials used) and which has an ionic strength and conductivity much larger than those due to the electroactive species added to the electrolyte", which makes it sound like the the SE ions themselves are conductive. Plus the most common explanation offered is along the lines of "because they are ions and ions conduct".

If I understand correctly now as discussed, they actually facilitate the reaction of the true electroactive species (which produce faradaic currents through redox - the current being a measure of conductivity), by maintaining neutrality around the electrode, rather than being "conductive" themselves (along with other roles such as making results more purely diffusion controlled, etc).

Again, thanks for your time!

Remember that in electrochemistry whenever a direct current is passing through the solution there must be electrolysis occurring at the electrode. Now, all you want to see in electrochemical experiment, is current due to the oxidation or the reduction of the desired solute which is diffusing to the electrode in an unstirred cell.

The gist of your excellent and thought provoking question is:

My question is how electroinactive ions of the SE "increase the conductivity" of the solution, as is commonly stated, (when if they are electroinactive they do not produce any (Faradaic) current themselves).

After giving it a little thought and some literature search, it is clear that supporting electrolytes increase conductivity is an erroneous conclusion which is rampant everywhere. In the electrochemical experiment, the flux of the supporting electrolyte must be zero, it should not be carrying any current, because by definition, it is non-reactive in that potential window. The mass transport of the electro-inactive species must be zero.

*Yes, separately, if we were to measure the conductivity of a solution to which an supporting electrolyte, the conductivity would be higher than the pure solvent..but that is a separate measurement. Remember that conductivity is measured by very high frequency AC current. 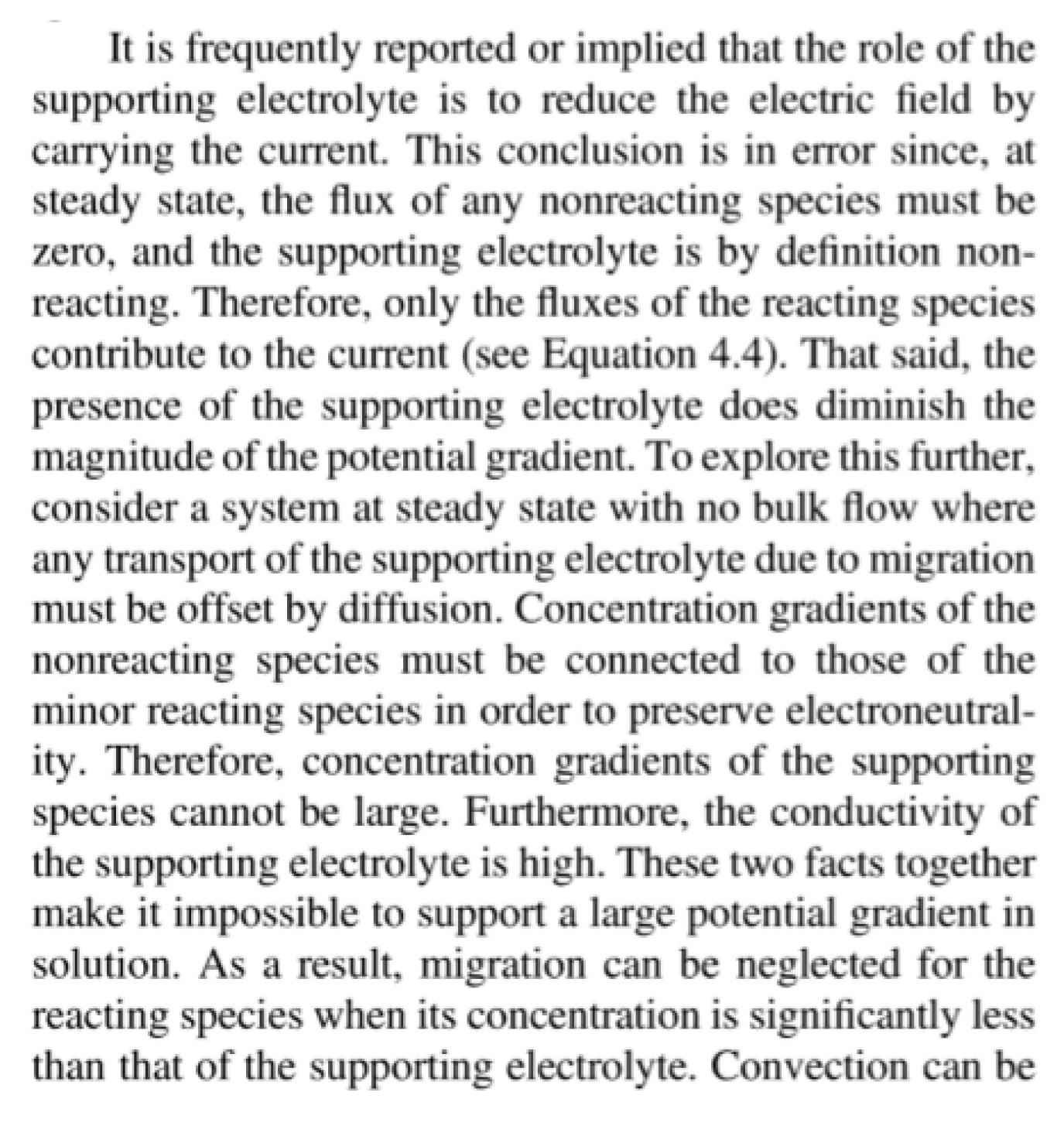 It is not easy to understand what you are looking for. Maybe an example could help. Suppose you are using a solution of sodium sulfate $\ce{Na2SO4}$. The corresponding ions $\ce{Na+}$ and $\ce{SO4^{2-}}$are not discharged at the electrodes. On the contrary $\ce{H2O}$ is reacting at both electrodes. Let's start with the cathode.

At the cathode, $\ce{H2O}$ reacts with electrons coming from the outer cell, and produces $\ce{H2}$ and $\ce{OH-}$ ions. But this reaction can only happen if there is enough positive ions around the cathode to realize the electric neutrality of the solution. That is where $\ce{Na+}$ intervenes. Forget about $\ce{H2}$. If there is enough $\ce{Na+}$ at the cathode, $\ce{H2O}$ can react and produce $\ce{OH-}$ ions in solution. The rate of this reaction is proportional to the concentration of $\ce{Na+}$ ions in solution. This is why the presence of the electrolyte increases the reaction rate. Simultaneously, the negative ions $\ce{SO4^{2-}}$ are repelled by the cathode and attracted by the anode.

At the anode, $\ce{H2O}$ reacts in a similar manner to produce electrons. To do it, $\ce{H2O}$ is decomposed and produces $\ce{H+}$ ions in solution (or $\ce{H3O+}$) and $\ce{O2}$ gas. But this production of $\ce{H+}$ ions can only happen if there are enough negative ions in solution near the anode. If there are no negative ions, the first $\ce{H+}$ ions repell the next ones, and the reaction stops. This is where the sulfate ions intervene. The $\ce{H+}$ ions attract the $\ce{SO4^{2-}}$, and so the neutrality of the solution is maintained. The rate of the reaction is proportional to the concentration of the sulfate ions.