Why Does Activation Energy not change with Temperature change

So let This be the graph at Temperature $T_1$, Now say We Increase The Temperature to say $T_2$ and so the energy of reactants must increase (as kinetic energy of molecules increases). So at $T_2$, reactants would start with more energy. So Shouldn't the Activation Energy decrease as now less energy is needed to reach Transition State.

I already saw answers on a similar question but couldn't figure out what's wrong with my approach. 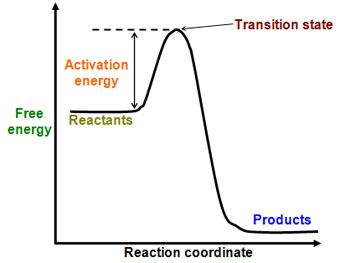 You have conceptual misunderstanding. In the activation energy context, energy of reactants, products and transition state are all potential energies, independent on the kinetic energy of molecules.

Higher temperature means higher kinetic energy, but it does not mean the potential energy barrier is lower. It means there is higher probability to overcome it, leading to a faster reaction.

There is a famour Arrhenius' equation for the reaction rate:

where $A$ is the frequency factor, describing the rate of molecular collisions, potentially able to take part of the reaction and $\exp{\left(\frac{-E_\mathrm{A}}{kT}\right)}$ is the term from the Boltzmann distribution, telling us the probability a molecule at temperature $T$ has sufficient energy, if the activation energy is $E_\mathrm{A}$, and $k$ is the Boltzmann constant.

You are on the right track. The problem is with the diagram you show, which is just a cartoon, and describes something that is actually not the activation energy, although it is generally interpreted as this and as such is a good 'rule of thumb'.

where $k(T)$ is the rate constant at temperature $T$. However, this mathematical method imparts little or no physical information about what the activation energy is. 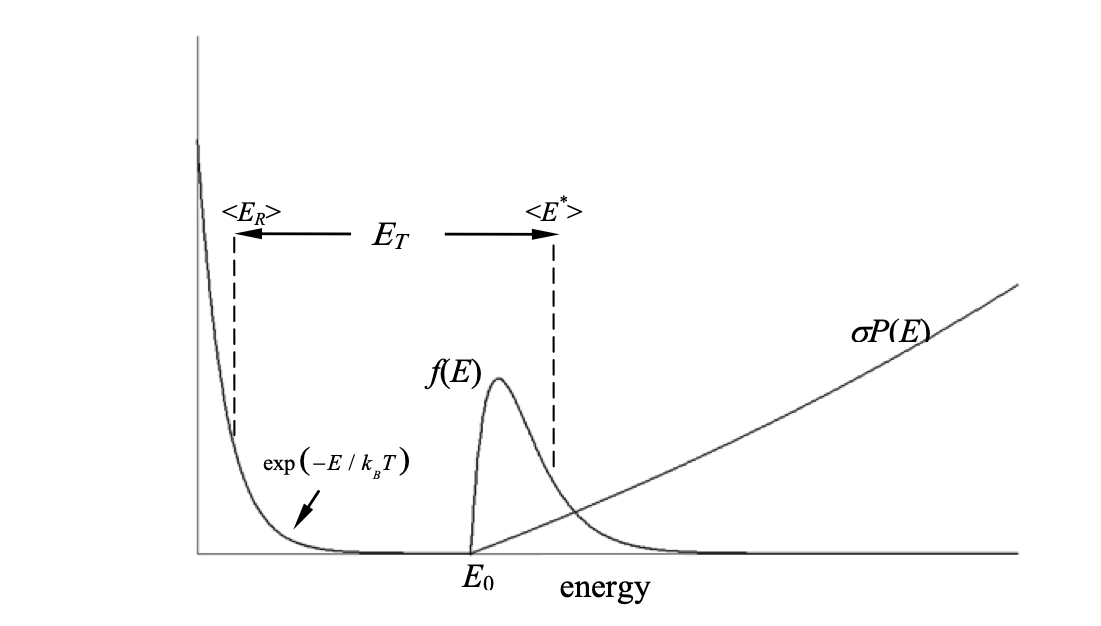 Figure 1. Tolman interpretation of the activation energy. Shown are the rate constant with energy $k(E)\equiv \sigma P(E)$, the Boltzmann factor $\exp(-E / k_BT)$ and the product $f(E)=\sigma P(E)\exp(-E/k_BT)$ which is the probability of having energy $E$ at the transition state. Note that $E_T\ne E_0$ where $E_0$ is the threshold energy for reaction. ($f(E)$ is multiplied by a large factor to make it visible on the graph).

Direct calculation via the Equipartition theorem gives the average energy of all pairs as $\langle E_R\rangle =3RT/2$ but the average of the reactive pairs is more complicated and depends on knowing how the rate constant $k(E)\equiv \sigma P(E)$ changes with energy and then $\langle E^*\rangle$ can be calculated.

Not the answer you're looking for? Browse other questions tagged energy temperature or ask your own question.

3
What does reaction exothermicity say about the stability of molecules
8
When temperature is decreased, why do reactions occur at all?
4
Why does attraction always cause release of energy making the system more stable?
17
Is activation energy temperature-independent?
6
Why is the yield of substitution reactions decreased at higher temperatures?
8
Catalysist activation energy - the Brønsted-Evans-Polanyi relation
0
How does increasing temperature reduce the efficiency of solar cells?
2
Internal energy for Phase Transitions