Why do 1s and 2s orbitals intersect? [closed]

Ask Question
Asked 6 months ago
Active 6 months ago
Viewed 145 times
0
$\begingroup$
Closed. This question is off-topic. It is not currently accepting answers.

So I was going through the Schrödinger wave equation to determine the shapes of orbitals. We know that an orbital is nothing more than a region where probability of finding an electron is maximum.

Further, we know that the probability of finding a 2s electron in 1s orbital is just too low! Why do 1s orbital and 2s orbital intersect? I mean both the orbitals have the same shape and the radial function of 2s orbital is more than that of 1s which clearly means that 1s orbital lies inside 2s orbital!

But as it's impossible to find a 2s orbital electron in 1s orbital, shouldn't the shape of 2s orbital be something like a hollow sphere with thick walls instead of a complete sphere?

I read your question a few times, and I think you're confusing occupancy with spatial probability distribution.

Orbitals have a lot of spatial overlap. But if the orbital has two electrons “in it,” then it cannot describe the probability behavior of any other electrons in that atom, as other electrons must be in another orbital.

A 2s electron absolutely can go into a 1s orbital provided there is space. This is exactly what happens with atomic emission spectra when an electron in energy level $n=2$ transitions to $n=1$ and releases energy.

The probability of occurance near kernel for 2s electron has a local maximum, as ns orbitals have (n-1) radial nodes. So no, 1s and 2s orbitals do not have the same shape, neither 2s and 3s. They just share the spherical symmetry.

Here is the ( local PNG copy of not pastable SVG) picture for 1s,2s,3s orbital from the page radial probability distribution function. 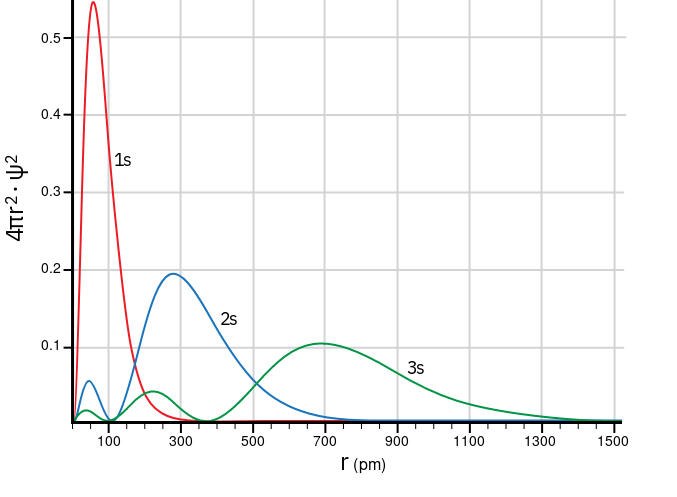 Note the quantity on the y-axis of the chart: $4 \pi r^2 \Psi^2$ what is probability an electron occurs in the infinitesimal spherical shell $r,r+\mathrm{d}r$

One can also check the radial term R(r) of wave function on chem.libretexts.org on Figure 8.2.2, describing orbitals 1s, 2s, 2p.

4
How are subshells and shells arranged in an atom?