What are the products formed in acidic hydrolysis of a tetrahydropyranyl ester?

Find the major product of the following reaction:

From my knowledge of reagents, I figured out that that the acid will protonate the oxygen(s) in the reactant and after that $\ce{C-O \sigma}$ bond should break, but I am not able to decide which $\ce{C-O}$ bonds to break in the reaction after protonation by the aqueous acid.

Am I thinking in the right direction or are there some other concepts involved?

The actual mechanism of the de-protection using alcoholysis would be as follows:

The actual mechanism of the de-protection using acidic hydrolysis would be as follows:

A place to start from if you didn't know the mechanism

Seeing that the compound given resembles a carbonyl group that has been protected using ethylene glycol, a mechanism using a reaction similar to that of protection of carbonyl groups was used here to hypothesis what would happen(not knowing the original mechanism) and to decide the products formed.

Hence, taking a reversed approach here, the first question I ask is:

What could have formed this acetal in the first place?

One part of the acetal seems to be connected to the carbonyl group and is part of the main molecule. The other side, however, is a different molecule. So, this is what the acetal formation looks like in the mechanism. Here, I assume $\ce{R}-$ is just an inert part of the molecule and so is equivalent to $\ce{CH3-CH2}-$. This may not be the right mechanism but it would give us a good starting point.

Formation of the hemiacetal takes place as follows:

Formation of acetal using propanol can happen as follows:

Which is the THP ether in the question.

What are the final products?

Therefore, the products of acid catalysed hydrolysis of the acetal would be $\ce{R-CH2-OH}$ and 5-hydroxypentanal which exists in equilibrium with its cyclic form dominating in mildly acidic conditions.

The hydrolysis of the hydroxyderivative of THP would happen as follows. Both alcohols will get protonated but protonating the oxygen in $\ce{-OH}$ results in the same molecule being regenerated.

Therefore, the final products would give $\ce{R-CH2-OH}$ and a hydroxy derivative of THP.

However, if $\ce{HCl}$ or $\ce{NaHSO3}$ is used instead of a weak lewis acid, we see the dominating compound in the equilibrium being 5-hydroxypentanal as shown in this paper here: 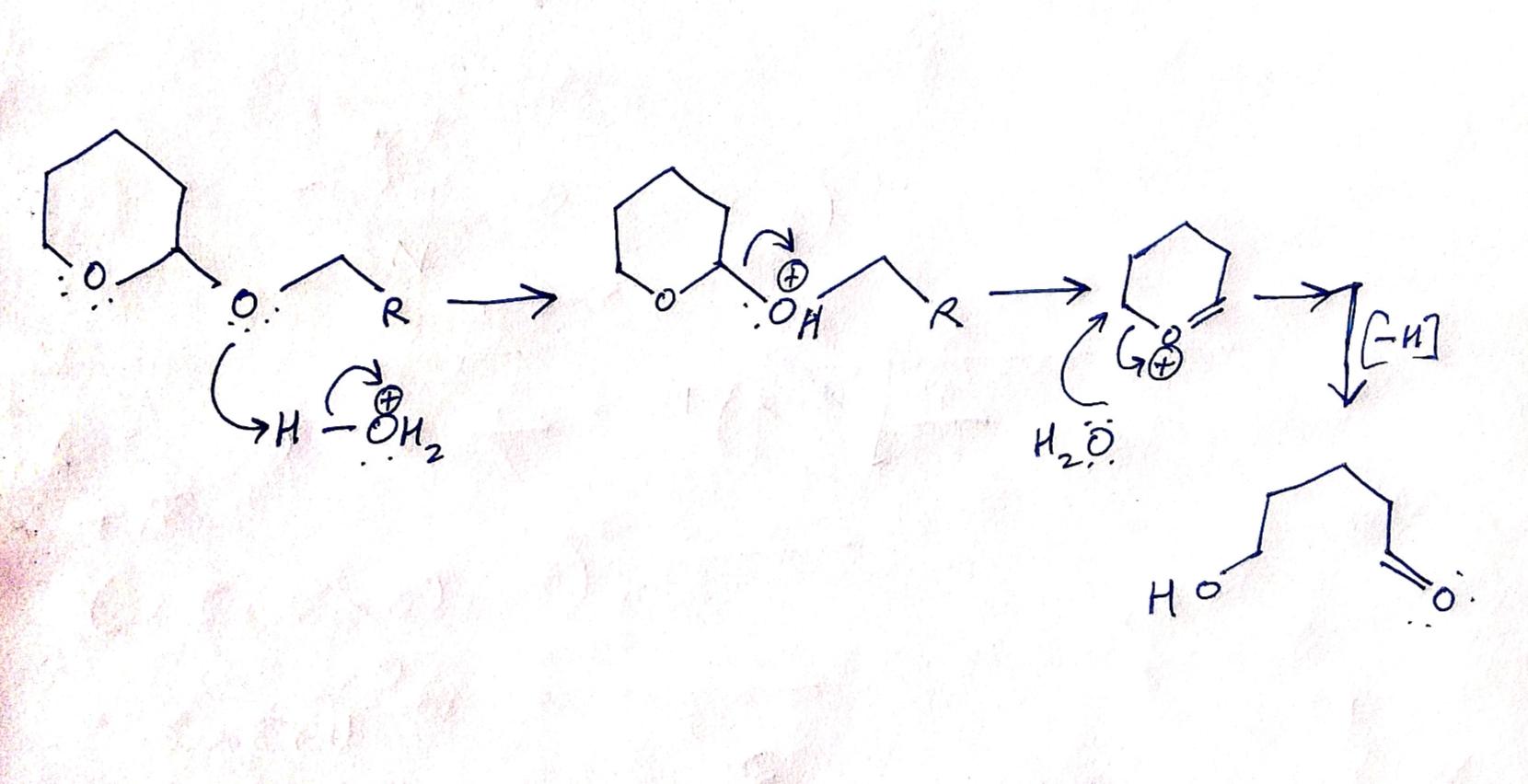 Not the answer you're looking for? Browse other questions tagged organic-chemistry reaction-mechanism ethers or ask your own question.

1
Cleavage of 2-Methyltetrahydropyran with HBr