Are there reactions where the stirring direction would make a difference?

I'm not a chemist. I don't really do anything with chemistry, so I know little of the subject.

I know a bit about chiral molecules. For example, I know that homochirality can affect light polarity.

I'm just curious: Are there chemical reactions where the direction of the stirring (clockwise vs. anti-clockwise) would make a difference? A simple explanation would be appreciated.

No, for three reasons:

Firstly, you need a relatively large molecule and/or a high viscosity and/or a strong shear/extensional flow, before the molecule even notices that it´s in a nonuniform environment. The molecule, if it has an elongated form, will then align perpendicular to the normal vector of that flow field. That only occurs for sufficiently concentrated solutions of polymers, or liquid crystals.

Secondly, you need three vectors to be able to differentiate a left and right hand. You only have the normal vector of the flow field, and the preferred direction of your molecule. Or in other words, your reaction will be indifferent to you watching it from the top of the beaker or through the bottom. ;)

Thirdly, to get a third vector into your system, you need the normal of the flow field to change significantly, in a specific direction (using, say, a propellor instead of a stirring bar), on the lenght scale of your molecules. That is impossible with a macroscopic stirrer.

In short: if the direction of stirring were a both reproducible and highly significant parameter for the synthesis of chiral molecules, the manufacturers would offer a back- and forward direction of stirring by default all across their stirrers. But no, I'm not aware that there is such an effect.

Note, however, beside the stirring plate in the (small scale) lab driving a magnet in the beaker 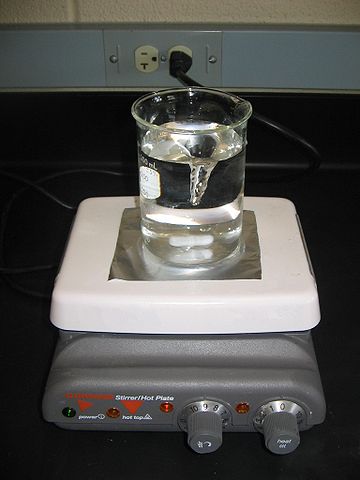 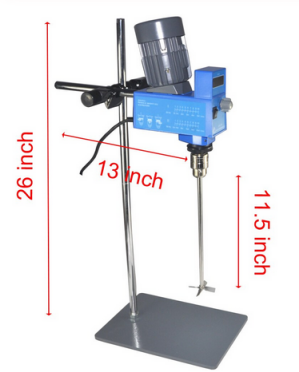 These occasionally have the option to alter the direction of stirring, but only because the mounting of the stirring blades may be chiral, screw-like (examples).

Side note: At best of my knowledge, there isn't a significant and reproducible influence of the geographic position (latitude), either. Thus, the synthesis of and with chiral molecules is independent if performed in Boston (northern hemisphere), Perth (southern hemisphere), or Quito (almost equatorial).

"Recently, several reports have suggested that the vortex flow of a solution of an achiral molecule gives rise to a CD signal, which is dependent on the stirring direction. This article introduces types of molecular architecture and material designs that show stir‐induced chirality....Supramolecular assemblies can be deformed to a chiral structure in a vortex flow which shows a CD signal even if the assemblies are achiral. ...Recently, we have shown that the stirring‐induced chirality caused by the host can be transferred to an achiral guest alignment. If such a transfer of chiral information could be realized on a molecular level from the vortex flow through a supramolecular aggregate to individual molecules, the consequences will be useful to a broad field in science and industry."[1]

"This article introduces types of molecular architecture and material designs that show stir‐induced chirality.....Here we report that a solution of an achiral cationic gelator can vicariously transfer the macroscopic chirality of the vortex stirring towards an achiral molecule (in fact, a molecule showing racemic conformations)." [2]

*See for instance the following, which shows an example of how a chiral environment, created by a chiral solvent, "steers chiral synthesis": https://cen.acs.org/synthesis/catalysis/Solvent-steers-chiral-synthesis/97/web/2019/07

On a larger scale, the direction of stirring can be used to optimize homogenization of complex mixtures. For instance, paint-like products can be mixed with a propellor-type blade. When the direction of rotation orients the blade pitch so as to force liquid down and around, a vortex is created which may dip so low as to allow air to be incorporated into the mix. Depending on the viscosity of the product, the air incorporated might rise to the surface rapidly when the stirrer is turned off (which is OK), or it might be trapped in the product, making it unsuitable for customer use. But automatically using the blade direction which does not produce that kind of vortex requires more attention to the homogenization process, and often does not do as well.

There are high-shear blades which have notches angled to produce best results when spun in one direction, even tho the blades are flat (except for the notches and bent-up sections) and look quite symmetrical.

14
Does gravity affect the rate of a chemical reaction?