According to me, the order should be P>Q>S>R as more hindrance should result in lesser reactivity but answer given in the book is P>R>Q>S. Why is the reactivity of R greater than that of Q and S even though the leaving group is on a $2^\circ$ carbon.

What you see inside the square brackets is the transition state, Nu represents the incoming nucleophile, while X represents the outgoing leaving group (both bearing a partial negative charge).

In this transition state, the carbon atom in the middle has a p orbital that shares one pair of electrons between the old and the new bonds. This suggests that the transition state for an SN2 reaction has a more or less planar carbon atom at the centre with the nucleophile and the leaving group arranged at $180$° to each other.

The point to be noted here is that the p-type orbital of carbon in the TS stays directly perpendicular to the plane formed by its three substituents, which is the same as the plane of the ring (in this case, all the three hydrogens shown in red). This means that sterically bulky groups which are present in the plane of the ring, and directly protrude towards the site of reaction (which is still perpendicular to this plane) and therefore will have a much bigger effect in inhibiting the entry of the incoming nucleophile as compared to those outside it.

This will be a general idea for the stability of TS (and hence the reactivity towards the SN2 reaction) in other cases as well.

Now, although all the options have adjacent benzyl groups, it might be worthwhile to see how benzyl and allyl groups stabilize the TS. These compounds react rapidly by the SN2 mechanism because the π system of the adjacent double bond can stabilize the transition state by conjugation.

The p orbital at the reaction center (shown below in brown, and corresponding to the brown orbital in the previous diagram) has to make two partial bonds with only two electrons — it is electron deficient, and so any additional electron density it can gather from an adjacent π system will stabilize the transition state and increase the rate of the reaction. This is shown here for allyl bromide:$^{[2]}$

The benzyl group acts in much the same way using the π system of the benzene ring for conjugation with the p orbital in the transition state. This stabilization will be present in all the four options,and I am making no attempt to compare them here

So, the geometry of the transition state and steric consideration will put S at the end due to the highly directed bulkiness of the di-ortho substituted benzene group, while P will jump ahead due to the absence of such clashes. S will still have benzylic interactions, but the incoming nucleophile will be hindered by the methyl group which points towards the perpendicular p orbital

Out of R and Q, R might achieve favourability over Q because again, a steric clash in the plane of substituents by a benzene ring having a methyl group directed towards the site of reactivity (the p-orbital perpendicular to plane of the ring) will generate much more hindrance than a single methyl group smaller than o-methyl benzene, which is directed away from the site.

Finally, another small reason that may tip the scales in the favour of R could be an interaction between the σ $\ce{C-H}$ bonds and the p orbital of carbon, in a kind of hyper-conjugative fashion similar to what happens in a carbocation (although this interaction would most probably be weak) as follows: 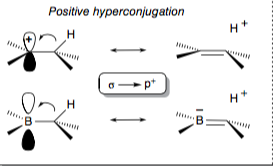 This weak σ $\ce{C-H -> p+}$ might lead to a lowering of the energy of the p-orbital, and thereby slightly increase the feasibility of attack by lowering the activation energy.

The visualization for this interaction may be seen in a similar fashion as hyperconjugation for a carbocation:$^{[3]}$

Such an interaction is not quite feasible in the TS of Q, where any interaction with the ortho-substituted methyl group will require complete delocalization over the benzene ring, which is not very probable as the TS is a short-lived species, and is not a full-fledged carbocation (especially since the leaving group is chloride, which is a good leaving group and doesn't lead to excessive charge development by a very early or late departure)

This is a really good question.

The reason you got it wrong is because you only identified one feature that leads to faster rate of bimolecular substitution, and that is secondary electrophiles react more slowly than primary electrophiles. That's good because you are trying to identify patterns of reactivity.

The reason that the secondary electrophile reacts slower is because the site of substitution is more crowded. But you have to think about the structure for the two electrophiles on the right (building a model will really help). The C-Cl bond is going to be perpendicular to the ring to be most reactive in a benzylic electrophile. But that means that the ortho-substitution is starting to crowd the site of reactivity. The more substitution you have, the worse the steric crowding gets, so S definitely reacts the slowest. In this case, the ortho-substition is a big enough deal that it's a more important factor than being a secondary electrophile.

I think the question wants you to consider the SN1 mechanism as well in your rankings. As Q and S each have a more electron rich ring than R, they generate a more stable carbocation on loss of the chloride ion than R. Therefore, the rate of SN1 has increased considerably and so a smaller proportion of the molecules go through the SN2 route. The carbocation forms on the carbon bonded to the ring therefore it is easily stabilised by the mesomeric effect.

The fact that the question doesn't provide a specific nucleophile makes me believe that they're probing electronic effects rather than steric hinderances.