Does there exist a black coloured metal?

Most of the metals are just painted/coated black. Does there exist a black coloured metal, either natural or artificial, such that even when we scratch it, it will still remain black?

Highly and degenerately doped semiconductors and semi-metals can be at least dark in visible light in many cases yet have good electrical conductivity. However it would be a stretch to call them either "metals" or "black" without qualifying those labels.

They appear dark in visible light for (superficially at least) the same reason that obsidian or black marble appears dark; they mostly transmit light entering the surface rather than reflect it, then slowly absorb it internally over microns or millimeters. The same is true for many semiconductors, but since their index of refraction in visible wavelengths is in the 2.5 to 5 ballpark their specular Fresnel reflection can be 20 to 50%! Compare to glass with an index of 1.4 or 1.5 and Fresnel reflection of ~4%.

See all the excellent answers to Why are most metals gray/silver? in Physics SE.

There's a short discussion of plasma frequency and semiconductors in this answer which begins:

Metals have a high density of free carriers that can be though of as a plasma. The plasma frequency of metals is usually in the ultraviolet (except for Born & Wolf; Alkali metals transparent to UV? Cesium transparent to blue?), meaning any electromagnetic wave below the plasma frequency would be rapidly absorbed and re-emitted (fancy words for "reflected" by the metal). Just like Earth's ionosphere reflecting HF frequencies and lower but transmitting most VHF and higher, a metallized film that reflects visible light and infrared light (heat) would also reflect all RF radiation; anything below the plasma frequency.

A polished surface could look different depending on what is being reflected, but a roughened or ground surface will look grayish.

This piece looks fairly smooth and so it has a shiny appearance due to Fresnel reflection, but it only reflects about 40% of the light, whereas a polished metal can be 95% or higher in some cases. 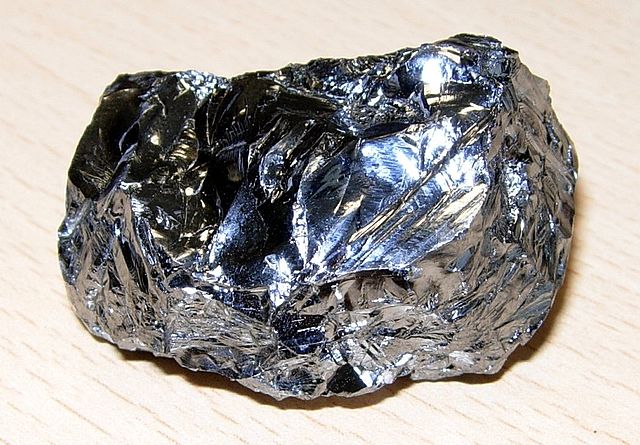 21
Painting metal, does it matter if all rust is removed before?
15
Do there exist metals that are composed of molecules?
3
For alkali and lanthanide metals, is there a better liquid barrier to oxidation than mineral oil?
7
Reaction between magnesium metal and sodium hydroxide: Does this even happen?
1
Materials used in cooktop heating element, and reason for black appearance