Why are Tyrosine and Tryptophan considered hydrophobic?

Unlike that in organic chemistry, polar and non-polar compounds determination is done differently in biochemistry, probably because most biochemical reactions are done in aqueous medium. Therefore, the classification of them as polar and non-polar is somewhat different from source to source. In general, amino acids, which can make hydrogen bonding in aqueous solutions are called polar, and ones repel from water are non-polar. According to Ref.1:

All polar amino acids have either an $\ce{OH}$ or $\ce{NH2}$ group (when in aqueous environment), and can therefore make hydrogen bonds with other suitable groups. 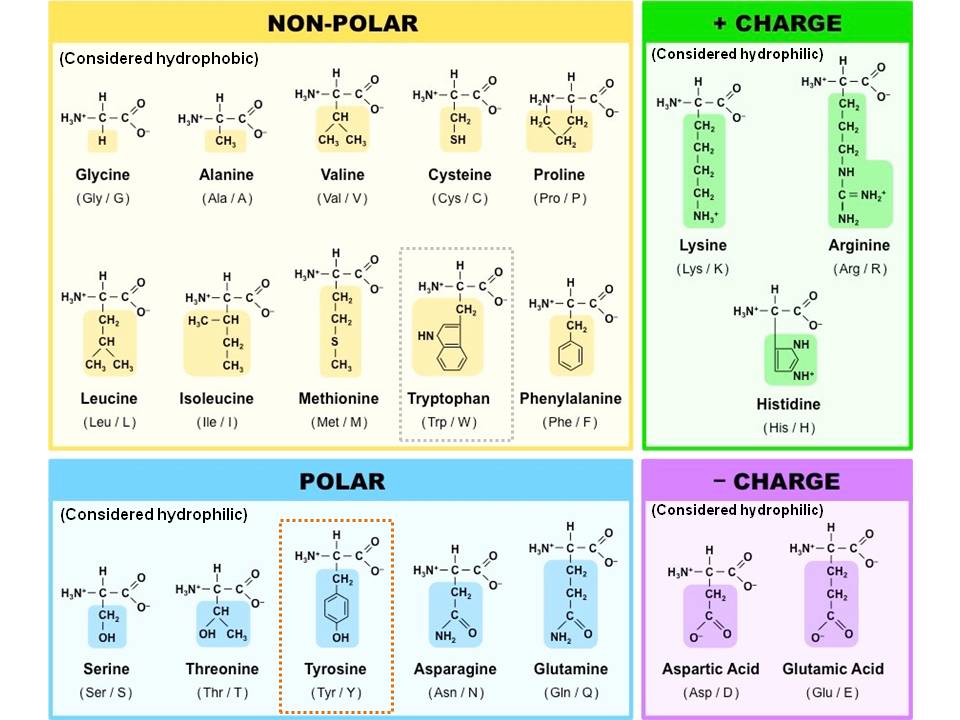 Tryptophan is less hydrophobic than phenylalanine and as a whole tryptophan is considered non polar although it has an additional N-H group at its side chain.. Look at the side chain of tryptophan which is more hydrophobic and large so if a tiny part (N-H) in its side chain is polar than still it can not influence the hydrophobicity of the entire side chain which is so large.. and secondly, although it has N-H group at its side chain so we accept that it will offer the hydrogen ion their lone pair electron to get charged but that is not happing actually ..because the lone pair electrons of tryptophan are busy in the resonance of the two fused ring so these electrons do not even try to look at the hydrogen ions in water so its neutral

Not the answer you're looking for? Browse other questions tagged biochemistry electronegativity polarity amino-acids or ask your own question.

3
Why are amino acids named amino acids?
16
How do I calculate the isoelectric point of amino acids, each of which has more than two values of pKa?
1
Polar vs. Amphipathic
5
Using electronegativity and atomic size to compare acidity of cysteine with serine
1
How Can an Amino Acid Be Non-Polar?
4
What is the most polar covalent bond?
0
How do I calculate the ensemble-average net charge of an amino acid at given pH?
3
Comparing Polarity of Amino Acids
1
Why is the amino acid cysteine classified as polar?