What is exposed in the surface tension of water?

(I guess) I understand the covalent bonding of water and the hydrogen bonding of water between two different molecules, but I would like to know which part is the part that that exposes itself to the air in the surface tension of water. There should be something different to the rest of the liquid, otherwise there would be no frontier, right?

Surface tension in water owes to the fact that water molecules attract one another, as each molecule forms a bond with the ones in its vicinity. At the surface, though, the outmost layer of molecules, has fewer molecules to cling to, therefore compensates by establishing stronger bonds with its neighbors, this leading to the formation of the surface tension.... more here: 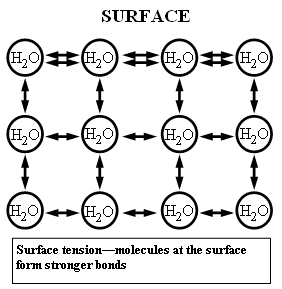 Thanks to all for your help (I'm in chemistry '101' for dummies so please try to be as basic as possible.

Surface tension may be described regardless if all / some / none of the water molecules expose one or both hydrogen atoms or the oxygen atom toward air, even if there are studies in this field (e.g., example, example).

Key points however are

Overall, the lowest energy of the water droplet would be achieved as a sphere. Sometimes, this is shown in microgravity (Scott Kelly at 8:28min). On earth, however, things like gravity, contact with a surface (adhesion), relative air speed (e.g., if a drop falls down the rain gutter) etc. lead to deviations from this ideal. However no, because the molecules in the inner of the water droplet are the same as the ones at the interface exposed to the air, there is no difference in the intermolecular, pairwise attractive forces between molecules of same type.

Not the answer you're looking for? Browse other questions tagged bond water hydrogen-bond or ask your own question.

-2
what is the graphic difference between ionic and covalent bonds?