what is the graphic difference between ionic and covalent bonds?

Reading my chemistry 101 again I can not find a graphical difference between an ionic bond (gaining-losing and electron) and a covalent bond (sharing) an electron when I try to think of the orbits/cloud of the electron. Why do they say that one is gained/lost or shared?

I would love to see a graphic example (meaning a drawing, video or something) that represents if there is a difference between different orbits (of NaCl and H2 or something). Since the electron occupies a cloud instead of an orbit in both cases, where is the difference?

May be is not a great question, but I can not visualize it! Thanks for helping starters

You may map the electron density around an atom will find regions where this probability is relatively high. Similar to a hiking map where lines mark the same elevation in a terrain, contour maps offer a representation in 2D, where the lines mark regions of same electron density. You find these used in quantum mechanics (like the ones below), or in crystallography (example).

These contour maps may be drawn for atoms in vicinity of each other, as shown below. The comparison of multiple electron density maps may reveal you the differences between a non-polar molecular bond, a polar molecular, and the one in the ionic state.

For nitrogen ($\ce{N#N}$) shown on the left, the map depicts a symmetrical electron density distribution which is symmetrical along the line you may imagine between the two nitrogen atoms.

Again, similar to a hiking map, these maps are a projection of a terrain as seen from a plane; seen perpendicular to this direction yields a profile like the following for the hydrogen atom (in this figure, read «charge density» as synonym for «electron density»): 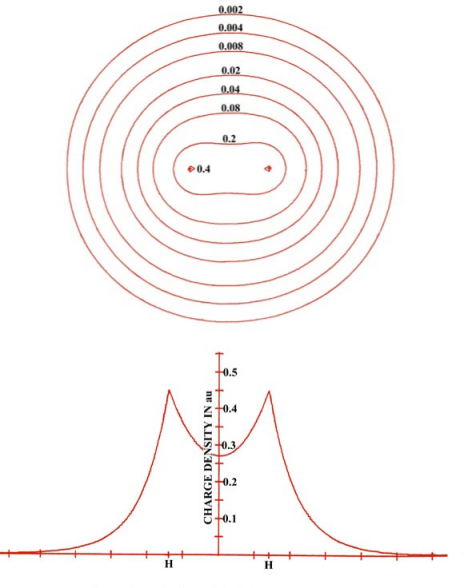 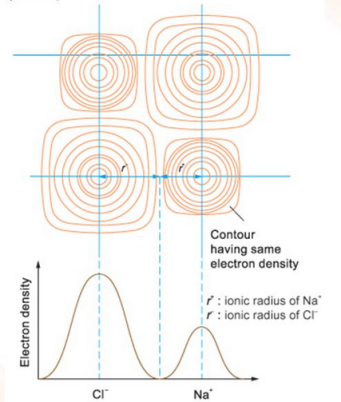 The discern between a «polarized bond» in molecules and the «ionic state» is somewhat arbitrary.

@Mike suggested to compare the situations above with the one in a typical metal like sodium, or copper. In the solid state, the spatial arrangement of metal atoms is regular; for example in a bcc lattice (sodium), or a fcc lattice (copper). Similar as in the case of NaCl, the metal atoms again donate the outmost electrons, formally yielding a charged cation. Contrasting to NaCl, however, these donated electrons are shared among all sodium / copper atoms; colloquially, this distribution is called electron gas because these electrons may move freely and contribute for electric conductance.

If you compare the electron density map of solid copper with the one of solid NaCl, passing from one atom to the next one, only the later contains extended volumes with practical zero electron density (marked by the blue arrow) insulating the ions from each other:

(figure slightly modified from this reference)

5
Given a CIF (crystallographic interchange format) file (and thus cartesian atomic coordinates), how can you find the bonds between atoms?
2
What is exposed in the surface tension of water?
-1
bonding in polar covalent bonds