Order of rate of acid catalysed dehydration of alcohols

The relative rate of acid catalysed dehydration of following alcohols would be: 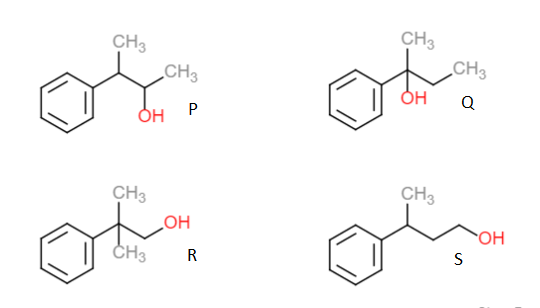 According to me, we have to arrange them in order of their carbocation stability.

Q will be the most stable as it is stabilized by Resonance and Hyperconjugation. P should come next. After that I think it should be S>R as in case of R there is no hyperconjugation and hyperconjugation is a “stronger” effect than the Inductive effect.

But in my Book R>S is given. Is Inductive effect stronger here? Or is there some other reason to it?

Your basic assumptions are correct.

It can be observed as such:

Similarly, this rearrangement may also be attributed to the comparison of P and R, where hydride shift and methyl shift occur. The migration amplitude of hydride, being lower, leads to rearrangement of positive charge quickly and hence is kinetically also favoured.

Thus finally the order may be:

An acid catalysed dehydration reaction of alcohols will always proceed with the removal of -OH as H2O molecule and therefore, will be dependent on the formed carbocation's stability because the rate deternining step for this process is formation of carbocation. Carbocation Carbocation can be stabilized by inductive effect, field effect, mesomeric effect (or) resonance and hyperconjugation effect.

Not the answer you're looking for? Browse other questions tagged organic-chemistry stability carbocation elimination or ask your own question.