Is hybridization of the cyclopropyl anion sp5?

I have read some answers about the $\mathrm{sp^5}$ hybridisation of carbon atoms in the $\ce{C-C}$ bond in cyclopropane as well as the $\sigma$-bond resonance in methylcyclopropyl cation.

But, overall true separation of orbitals in such cases is not defined i.e. we cannot say that some orbital is completely $\mathrm{sp^2}$ hybridised.

Similarly, if the loss of a proton occurs from cyclopropane then the following: 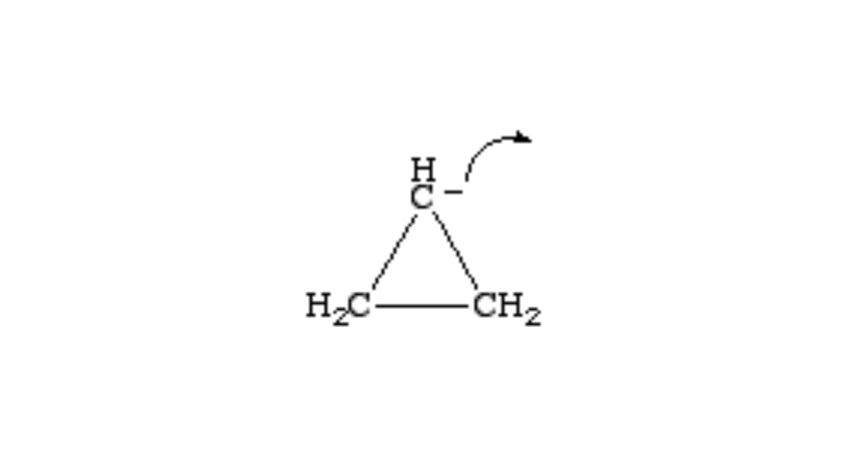 In such an ion, will the hybridization change and $\mathrm{s}$ and $\mathrm{p}$ characters of the orbitals be redistributed?

My assumptions for this are:

Then, what will be the change in the hybridisation in the overall molecule on formation of this ion?

Charles Coulson was the originator of Coulson's Theorem, a useful tool for the chemist. It allows you to make "back of the envelope" estimations of hybridization if bond angles are known. Conversely, if one knows the hybridization from, say, $\mathrm{p}K_\text{a}$ or $J_{C^{13}-H}$ data, then the bond angle can be estimated. The key equation is $$\ce{1+\lambda_{i} \lambda_{j} cos(\theta_{ij})=0}$$

See these earlier answers for interesting examples where the theorem is applied:

The $\ce{H-C-H}$ angle in cyclopropane has been measured to be 114°. From this, and using Coulson's theorem

where $\ce{\lambda^2}$ represents the hybridization index of the bond, the $\ce{C-H}$ bonds in cyclopropane can be deduced to be $\mathrm{sp^{2.46}}$ hybridized. Using the equation

Now, if we remove a proton from cyclopropane and generate the cyclopropyl anion, we move from a situation where we had a pair of electrons shared between carbon and hydrogen in a $\ce{C-H}$ bond to a situation (the anion) where we have a pair of electrons residing entirely in an orbital on the carbon atom. In other words, we have increased the electron density in this carbon orbital. Bent's Rule tells us that the molecular geometry will change so as to lower the energy of this pair of electrons and that it will lower the energy of these electrons by increasing the s-character of the orbital they are in. In order to increase the s-character in this orbital, we will take some s-character away from the 2 $\ce{C-C}$ bonds and 1 remaining $\ce{C-H}$ bond. Hence, $$\lambda^2_{\ce{C-C}}>3.74$$ $$\lambda^2_{\ce{C-H}}>2.46$$ and $$\lambda^2_{\ce{C-electron pair}}<2.46$$ Said differently, the interorbital (not internuclear) $\ce{C-C-C}$ angle at the anionic carbon will decrease and the $\ce{C-C-H}$ angle will decrease making the substituents about the anionic carbon appear more puckered.

Not the answer you're looking for? Browse other questions tagged organic-chemistry molecular-structure hybridization or ask your own question.

89
What is Bent's rule?
41
Why does cyclopropane react with bromine?
28
Sp5 hybridization in cyclopropane?
21
Non-integer hybridization
6
Estimation of the bond angle of water
7
Are the triply-bonded carbons in pyridyne (and benzyne) sp-hybridised?
4
Nucleophilic attack at a carbonyl - angle of attack
3
Negative s - orbital chatacter

21
Non-integer hybridization
20
How can the Bonding in IF7 be explained using LCAO method?
3
Draw a simplified MO diagram for the pi system of Methyl vinyl ether
9
Is the hybridization only related to atomic orbitals but not to the molecular orbitals?
13
What is the hybridisation of trifluoromethyl free radical?
4
Clarification needed regarding description of molecules without hybridization using pure p orbitals