Regioselectivity in Electrophilic Aromatic Substitution of Pyrrole and Indole

If we look into the structures of Pyrrole and Indole, they are very similar. Only Indole has one extra Benzene ring attached to it, i.e. if we attach one Benzene ring to Pyrrole, what we'll have is nothing but Indole. 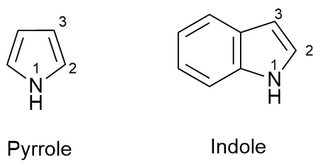 But if we delve into the preferable positions of Electrophilic Aromatic Subsitutions for these compounds, it's pretty well known that Pyrrole undergoes EAS preferentially at the $2$-position, whereas for Indole it's the $3$-position which is favoured.

A typical example of an Elcetophilic Aromatic substitution reaction where this distinct feature between Pyrrole and Indole can be clearly visible is the Vilsmeier-Haack Reaction. The major outcomes of the reaction in the two cases clearly show the difference. 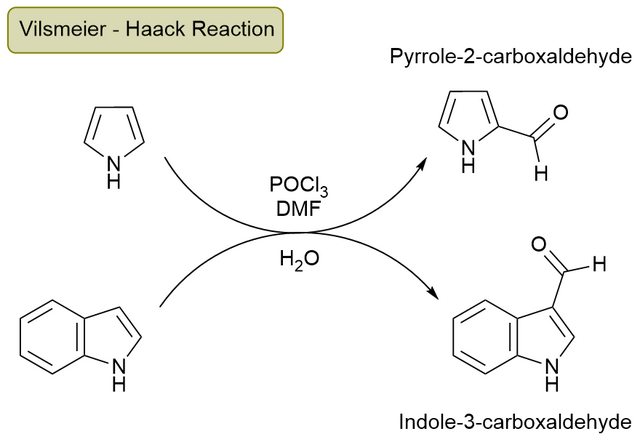 Now, the preference of $2$-position in case of Pyrrole can be justified easily by considering the greater stability of the $\sigma$-complex intermidiate formed in case of substitution at $2$-position due to more number of resonating structures as clearly been described in the answer to the question Regioselectivity in Electrophilic Substitution of Pyrrole

The resonating structures in case of two different substituent positions in Indole are shown below, 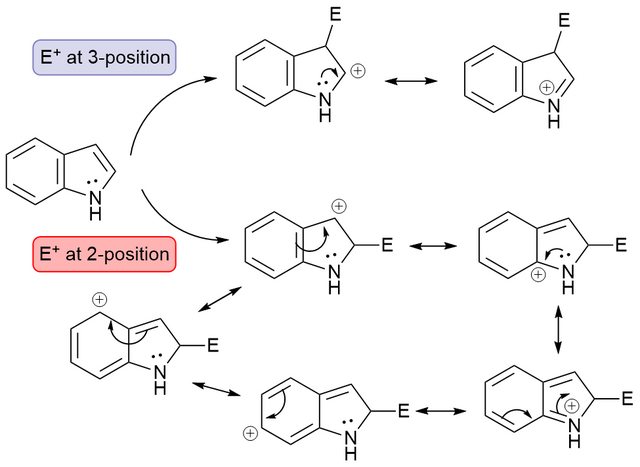 P.S. Thoughtful answers are highly appreciated. Any kind of Quantum Mechanical Calculations or Computations or Orbital Analogy are also welcome.

The traditional explanation for the reactivity of indole at C–3 is that attack at C–3 does not disrupt the aromaticity of the benzene ring in the cationic intermediate (see any organic chemistry book; for heterocycles a good book is Joule and Mills as has been suggested in the comments):

You have drawn many of the resonance structures for the intermediate, including the two shown above. So I should mention that the major resonance contributor should be the one where the positive charge is borne by the nitrogen. In this case, the positively charged nitrogen has four bonds and a complete octet; whereas if the positive charge is on carbon, that's formally a six-electron, electron-deficient carbocation. Many thanks to Buttonwood for pointing this out.

To a first approximation, one could consider the reactivity of indole to be as if it were a benzene ring plus an enamine, and enamines are very, very happy to react β to nitrogen and not α. This is of course not an enamine, but the idea is the same.

For pyrrole, there is no "other benzene ring" to worry about, so this consideration does not apply.

Not the answer you're looking for? Browse other questions tagged heterocyclic-compounds electrophilic-substitution or ask your own question.

15
Regioselectivity in electrophilic substitution of pyrrole