What is the hybridisation of the bridging oxygen atoms in the borax anion?

Below is a neat looking borax anion. 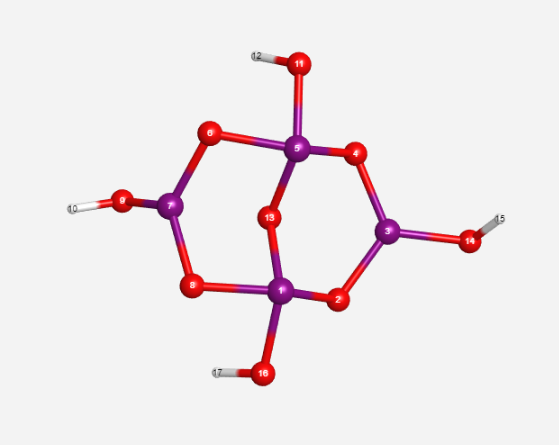 While exploring the molecule in a computer simulation (Gaussian 16, level of theory: HF/3-21G), I found that the oxygen atoms in the 8-membered outer ring had sp2 hybrid orbitals. My curiosity led me to question the presented data. Using Natural Bond Orbital analysis, I found out that:

Here BD denotes a 2-centered bond with atom(i)atom(j) and LP(i) denotes the lone pair and the s,p characters follow. My question is as follows:

Given the chaotic data, how does one analyse or interpret the harmony and claim that the oxygen[2] is indeed ~sp2 hybridised?

What is the correct hybridisation of the oxygen atoms not connected to a hydrogen?

First, it's important to understand that the simple integer hybridization labels sp, sp2 and sp3 are gross approximations and only accurately describe the electron density of simple symmetric molecules like $\ce{BeH2}$ and $\ce{CH4}$. Atoms in more complex molecules (even something relatively simple like $\ce{H2O}$) cannot be described accurately using these labels. Instead, the contribution of atomic orbitals to localized bond orbitals must be described by non-integer combinations.

That said, the calculations you did are remarkably consistent with an sp2 hybridization of oxygen [2]. If I understand the notation correctly, it says that the bond from O[2] to B[1] is ~90% p (roughly a pure p orbital), while the other bond to B[3] is ~75% p (i.e. sp3). The two lone pairs on the oxygen average 67% p, perfectly sp2.

We are able to average the two lone pair orbitals because electrons are completely interchangeable and are not localized to a specific lone pair. Any hybrid orbital description that captures the combined electron density of the four electrons in the two non-bonding orbitals is acceptable.

So the oxygen can be described as having two sp2 nonbonding orbitals, an sp3 bonding orbital and a nearly pure p bonding orbital. That's pretty close to sp2 hybridization, where we expect three sp2 orbitals and one pure p. The only deviation here is the shift of ~ 10% s from one of the sp2 orbitals to the p orbital, so that we end up with an sp3 and a not-quite-pure p instead.