How is the charge of covalently bonded atoms determined?

My question is about what it is - at the subatomic level - that determines the charge on atoms which participate in covalent bonding in reality. I understand that formal charge is just that - it's a formality, which gives human beings a very useful tool for modelling reality and making predictions. I, though, would like to know what is responsible for the charge we find in covalently bonded molecules.

Let me explain. If we picture an ionic bond as a highly polar covalent bond, we can see that in an atom like NaCl we have the state of affairs where the highly electronegative chlorine atom has "pulled away" an electron from the sodium atom.

(Orbitals omitted for ease of drawing)

Ultimately this means that Na, with its 11 protons has just 10 electrons, which gives it a positive charge, while Cl, with its 17 protons, now has 18 electrons, giving it a negative charge. Electrostatic forces between the two nuclei result in the bond.

Of course, it might be more accurate to say that the Na nucleus simply ceases to be significantly affected by its former 3s1 electron. As a result the 11 protons in the Na nucleus, which result in a +11 charge, are countered by only 10 electrons, giving a +1 charge overall. Meanwhile, the 17 protons of the Cl nucleus (+17 charge) experience the negative charge of 18 electrons (-18) giving a -1 charge overall.

Let's compare this with the situation we find in the carbonate ion. (Link) For the purposes of my question I won't worry too much about resonance, I don't mind too much whether we have the accurate -2/3 charge, but let's keep it simple and just look at one of the contributing structures. 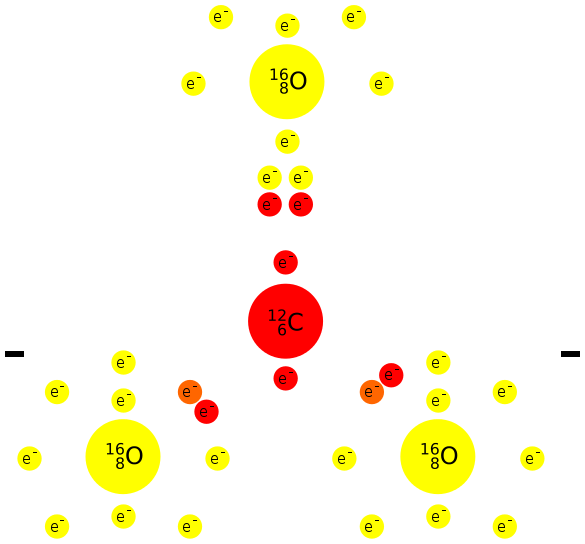 (Orbitals again omitted for ease of drawing. Orange indicates an additional electron from some other source. Oxygen has only eight electrons ordinarily, but one will be gained when forming this ion)

In this case we have covalent bonding. In the case of the singly bonded oxygens, we have 8 protons and 10 electrons. This is two more negatively charged electrons than positively charged protons. This, though, is not ionic bonding, it is covalent bonding and the polarisation is not such that the electron contributed by carbon dissociates completely from the Carbon. Instead it is "shared" between the two. Nevertheless, the "sharing" is not equal and oxygen attracts the electrons more strongly than the carbon, so we have a -1 charge.

My question, though, is - why is it that the charge works out like this? Why is it that when you have oxygen (8 protons) (charge of +8) and a filled outer shell (8 electrons plus buried inner core gives -10 (charge of -1 on each electron)) you have a charge of -1 not -2, is it simply the covalent bond, is it simply the fact that the two electrons in the sigma bond are sufficiently far enough away in reality?

But then why should it be that the doubly bonded oxygen, which also has ten electrons surrounding it, has no charge at all? Meanwhile, the carbon atom in the middle is surrounded by 10 electrons also, whereas it has only 6 protons and yet carries no charge at all.

Naively the answer seems obvious. The bonds are covalent and the electrons are "shared." So, in the double bond (which, of course, has a different nature to the single bond) one must assume that the electrons are positioned in such away that they are balanced by the protons of the oxygen nuclei. There is therefore no charge on this atom.

In the case of the Carbon atom we surely again understand that the right balance of charges and distance from the nucleus is arrived at.

Overall we have 32 electrons and 30 protons so the overall -2 charge on the whole atom makes sense.

The ultimate question I've been trying to lead up to is what is it that dictates the distribution of charge. What is the difference - at the subatomic level - between two ionically bonded atoms, a covalently bonded molecule like the CO32- ion which carries a charge, and a covalently bonded molecule like H2O - which is also polar (hence we can have hydrogen bonding) but isn't usually assigned a charge. On what basis do we assign charge?

As you point out, formal charge is a "bookkeeping" method of assigning electric charges to atoms in a way that lets us easily approximate where the electron density is.

Chemistry is made up of layers of successively less detailed approximations. The concept of "formal charge" is near the top of the stack - very little detail is involved. It is only slightly more detailed than Lewis structures, in that we are at least trying to acknowledge that covalent bonds don't really share electrons equally.

With that in mind, we will look at the next higher and next lower level of detail, to see why formal charges are useful.

Whenever we draw a Lewis structure, we imply that each line is made up of two electrons that share a molecular orbital that exists somewhere in the space between the two atoms that it connects. Without knowing any better, we would assume that each electron can be wherever it "needs" to be to fill the valence shell of an atom. So, in the case of $\ce{CO3^2-}$, the carbon has four bonds and no lone pairs, giving it a full octet. The oxygen atoms have either three lone pairs and a single bond, or two lone pairs and a double bond, again giving each a full octet.

Note that we counted each electron twice for the purpose of checking the valence configuration. It's as if we are saying "each atom can borrow electrons from the other whenever it needs them." We are effectively ignoring any tendency of atoms to pull electrons towards each other - they float between atoms as needed, as if maintaining a full octet were the most important job in the world.

Next we look at the formal charges. The rules for determining formal charge say that we count the number of valence electrons an atom normally has (without bonds), then subtract the electrons we assign to it. We assign to an atom all of the electrons that are in lone pairs, plus one half of the bonding electrons. In other words, instead of saying that each atom gets the electrons whenever it wants them, we are saying "each atom in the bond divides the electrons equally between themselves." When you do this, you find that some atoms have "extra" electrons (more than they would normally have in the valence shell) and some have too few - thus, a formal charge.

This starts to give us a slightly more correct picture of how electrons are distributed inside of a molecule, but it doesn't really tell the whole story. Notice that we didn't care about what type of atom it was when we split up the electrons. We only looked at that to find the "natural" number of electrons it would have.

The next layer of detail involves electronegativity. In any covalent bond between two different elements, one element "likes" electrons more. The reasons for this are complex, and you have to go down another couple of layers to get to the reason. For now, just know that it is related to quantum mechanics.

If we know the relative electronegativities of elements, we can start to account for this tendency as well. We do this when assigning oxidation numbers. With oxidation numbers, you assign to each atom all of its loan pair electrons. Then, for each bond, you give all electrons in the bond to the more electronegative atom. Then we subtract the total from the number of valence electrons the atom normally has.

Notice what we are doing. First we said "all electrons are shared equally all the time." Then we said "Divide the electrons equally." Finally we said "the most electronegative atom gets all of the electrons."

None of these is actually true, but each gives a quick approximation that is useful for a particular type of problem. To get a real picture of what is happening to the electron density, you have to do detailed quantum mechanical calculations. They are really hard to do! We typically use computers to solve them. But, if we know what the limitations are, we can use quick approximations to get an idea of where the electrons are at that is good enough to, for example, make reasonable predictions in organic chemistry.

13
Why does coordinate covalent bond form?
1
How does a carbocation have a positive charge?
2
Would hydrogen bond form in these scenarios?
1
Difficulty understanding redox in terms of hydrogen and oxygen transfer?
0
How do lone electrons impact the charge of an ion?
2
What does "spin degeneracy" mean in this context?