In my book this reaction is given without any mechanism:

I thought that simple dehydration reaction is going to take place with rearrangement of the carbocation but I have no idea as to how toluene turned out to be the product.

Seeing the reaction given here, I assume that is an on-paper reaction that takes place and that all three alcoholic groups are dehydrated.

The mechanism (on paper) seems to be as follows

For the first dehydration, the carbocation formed is stabilised via ring expansion and then forms a double bond as follows:

Similar to the first dehydration, a ring expansion occurs to stabilize the carbocation by forming a 6-member ring:

In the third dehydration, a hydride shift takes place concomitantly forming a tertiary carbocation stabilized by conjugation with the double bonds. The double bond is then formed giving the compound aromaticity. 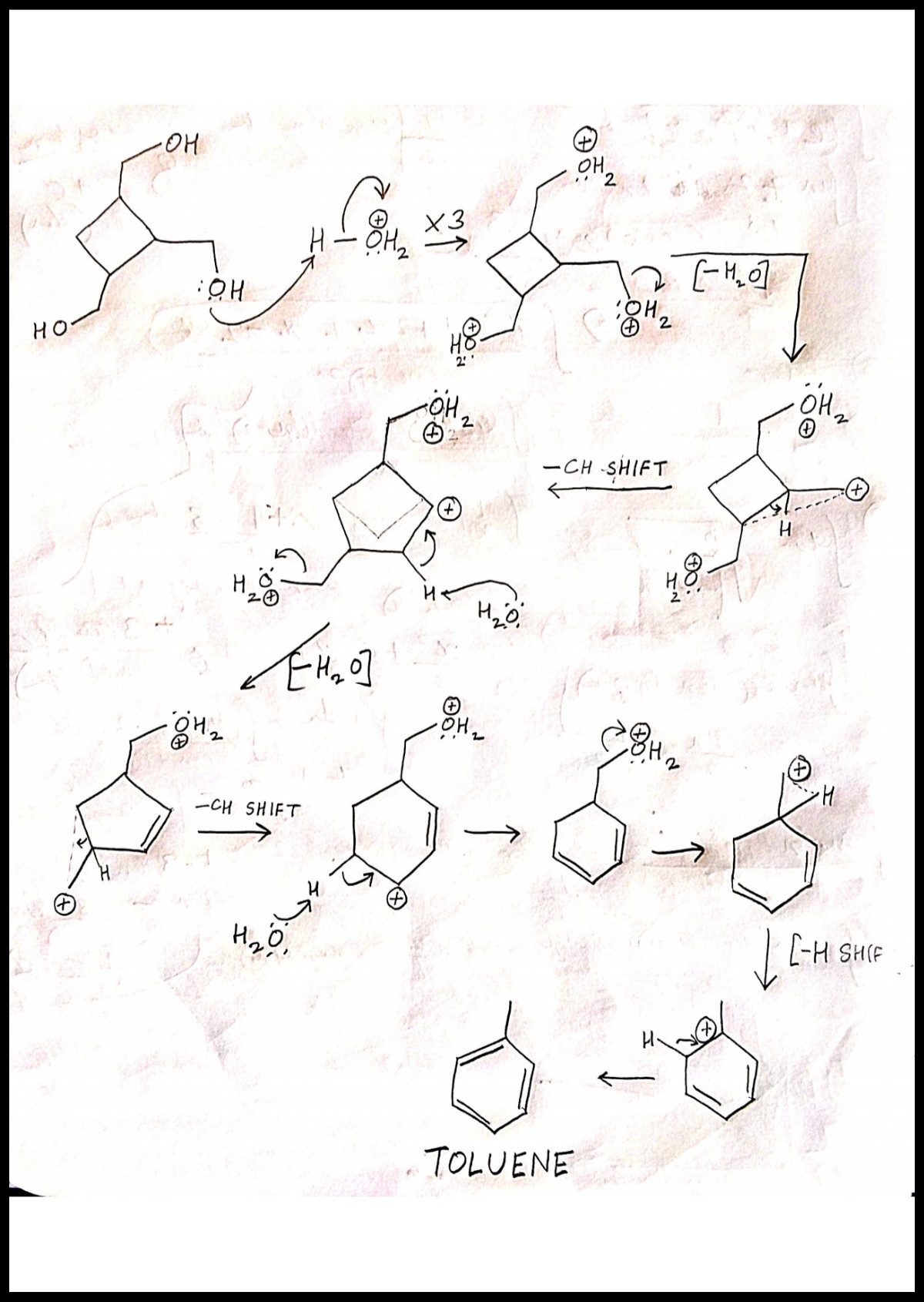 The mechanism should provide for the successive processes of carbocation formation, rearrangement and proton loss.

The first step step should involve protonation of each hydroxy group attached. Protonation produces hydronium ion from hydroxide, which is a good leaving group. It leaves forming carbocation.

The carbocations, although formed in a single step, can be dispayed using successive steps for ease.

Each step of hydronium ion loss will produce a primary carbocation, which is unstable(due to lack of any prominent stabilising effect like resonace or hyperconjugation). Hence, rearrangement is the only method emplyed for efficient stablization of catbocation.

The neighbouring migration may be of -CH or -H. Generally, the migratory amplitude of -H is higher than -CH. But hydride migration will not solve the problem of enormous ring strain. Therefore, to ease ring strain, it is -CH which migrates.

This migration of -CH group and successive step of deprotonation occurs twice, in two -OH losses.

In the third -OH loss the ring is expanded enough to ease ring strain. Thus, hydride, having lower migratory amplitude, is preferentially, migrrated to transfer positive charge. But this does not cause any ring size change. Next deprotonation step causes, double bond formation, to generate toluene. This is also enhanced due to the tendency to acquire aromaticity, as multiple double bonds are quite unstable.

4
Why and how does ring expansion occur in the dehydration of (cyclobut-3-ene-1,2-diyl)dimethanol?
1
Dehydration of primary alcohol with a cyclobutadiene substituent

6
Carbocation rearrangement in alkene addition reaction
8
Comparison of rate of dehydration of primary, secondary & tertiary alcohols on cyclohexane
2
What happens when prop-2-en-1-ol reacts with concentrated hydrogen bromide
11
Mechanism of radical cyclisation to form hydroazulene core
2
Which reaction occurs first when 5-hexen-1-ol reacts with sulfuric acid?
8
Does a reaction proceed through SN1 if rearrangement results in a stable carbocation?
2
Rearrangement in dehydration of alcohol
3
Acid hydrolysis of Birch-reduced Anisole