Why is hydrogen sulfate put together as it is?

I'd assume that hydrogen sulfate looks the same, but without the methyl group attached. However I'm confused, how can it be constructed like that? This shows the sulfur having a total of 12 valence electrons, but shouldn't the maximum be 8?

I might be asking something that'll be obvious to me later on in chemistry, but this (and other groups that act as atoms) appear early on. I probably don't need to know it yet but I'd prefer to know how it works if I can as opposed to just accepting it.

I think it's time for you to know about Octet Expansion rule. The molecules that expand their octet are known as Hypervalent Molecules.

Normally, atoms in group 2 have 8 electrons and can thus form 4 bonds. This is mainly because they have s and p orbitals. However, in elements of group 3, they have extra orbitals called d orbitals that can be used to form more bonds. when forming extra bonds, the atom promotes electrons into the d orbitals and allows the atom to from more than 4 bonds.

Same thing happens in the case of sulfur. Sulfur belongs to 3rd period and therefore it has a vacant 3d orbital and thus can accommodate more than 8 electrons in its valence cell.

Hypervalency is an obsolete concept - it was used to explain bonding situations of molecules, that seem to exceed the octet rule. It was accomplished by the help of $\ce{spd}$ hybrid orbitals. It is now known, that for almost all molecules that were described this way the contribution of $\ce{d}$ orbitals is negligible (<1%).

Focussing on the question at hand, the bonding situation of the core $\ce{SO4^{2-}}$ anion is isoelectronic to the phosphate anion $\ce{PO4^{3-}}$.

For the methylsulfate this situation may be extended. A qualitative analysis of the natural charges (BP86/cc-pVDZ) reveals no difference. All of the oxygen atoms carry a negative charge, while sulfur is highly positive charged. Further more, NBO analysis confirms that the terminal oxygens have three lone pairs, while the other oxygens have two lone pairs. A more accurate Lewis structure would represent that fact and only use single bonds. 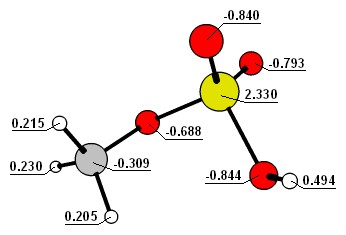 23
Bonding in the phosphate ion
0
What is the bonding picture in Peroxomonosulfate?
3
Molecular orbitals and “generalized” aufbau principle for heteronuclear molecular configurations
1
Is Octet Expansion appropriate when regular Octet bonding is possible (such as using dative bonds)?

4
Why does sulfate have this structure?
5
How does a “sea of electrons” hold metal atom together?
4
Bond angles in sulfate
4
Are the Phosphate and Sulfate ion diagrams with double bonds an invalid picture?
2
How does ice formation glue things together?
1
Maximum force that hydrogen-hydrogen bond can withstand