Most favorable position of attack of an electrophile on 4-trifluoromethyl-1,2-diphenylbenzene

This problem is from a 2016 FIITJEE AITS paper:

Which position is most favorable for the attack of an electrophile? 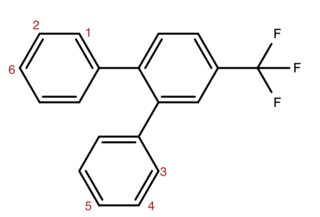 The more favorable position for attack should be the on the para ring (considering ring with $\ce{-CF3}$ group as the reference ring), because of the lower inductive effect as compared to meta position.

If the electrophile attacks at position $1$ or $6$ (which means the carbocation will be formed at the carbon connected via a double bond), the carbocation would be equally stabilized by resonance, also the charge can move to the other 2 rings forming 9 Resonating structures.

If carbocation is formed at position $6$ by the electrophilic attack on 2nd position, the carbocation won't be able to move out to other rings for resonance implying that there would be only 3 resonating structures.

So my answer would be:

Why is my answer is wrong? What is the correct explanation? 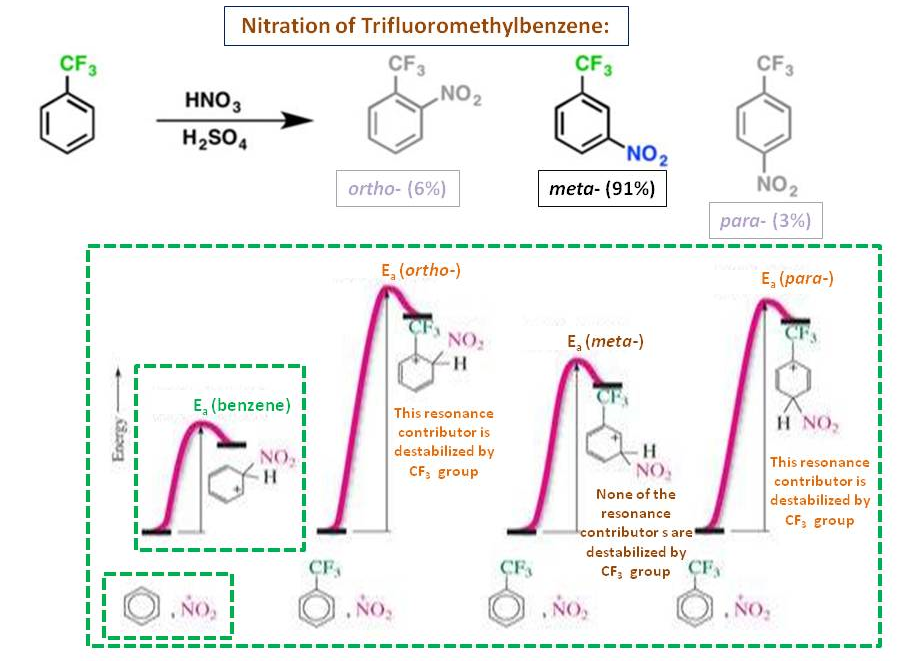 According to this University of Columbia website, the highest percentage of nitration is at meta-position. If the rate of nitration of benzene is considered to be $1$, that for trifluoromethylbenzene is $6.7 \times 10^{-5}$ for meta-substitution while that for ortho- and para-positions are about $4.5 \times 10^{-6}$. That means, $\ce{CF3}$ group is a strong deactivator (c.f., rate of nitration of toluene is 58, 42, and 2.5 for para-, ortho-, and meta-substitution, respectively compared to benzene being 1).

The reason for preference for meta-substitution of trifluoromethylbenzene is depicted in the scheme. At least one of resonance contributors of the relevant Wheland intermediate during each of ortho- and para-substitution is destabilized by the neighboring $\ce{CF3}$ group ($\ce{F3C-C^+}$ destabilization). Meantime, none of resonance contributors of Wheland intermediate corresponding to meta-substitution do not deactivated and enjoys lower activation energy. All of these directed to the conclusion that the highest electron density is at meta-position when the aromatic nucleus is deactivated by +I effect (Ref.1-4). However, keep in mind that this highest electron density at meta-position is still way lower than the electron density of benzene.

Based on these facts, the substitution happens in the aromatic ring with 3, 4, and 5 positions (Keep in mind that there are no resonance contribution what so ever due to aromatic nuclei being non co-planner). When you consider the aromatic ring with 3, 4, and 5 positions, it has a substitution next to 3-position, which is an electron deficient biphenyl with $\ce{CF3}$ group on one of the phenyl ring. This substituted biphenyl is, therefore, meta-directing (a similar way as described for the substitution of trifluoromethylbenzene in the scheme). Thus, up coming substitution on the sought ring would be at meta-position, which is marked as position 4.

There are two factors to consider in this question. The first is that the trifluoromethyl group ($\ce{CF3}$) is electron-withdrawing by induction. Fluorine is the most electronegative element, and the $\ce{C-F}$ bond is polarized toward $\ce{F}$. The $\ce{CF3}$ group has a -I effect on the ring, and that effect is strongest at ortho and para.

The second is that the three rings in this structure are not coplanar. The steric interactions between hydrogen atoms on the two rings with labeled positions in your image causes the rings to twist out of coplanarity. This feature of the structure means that the central ring cannot exert a resonance effect on either of the other rings. The central ring will is electron poor thanks to the $\ce{CF3}$ group, and so it will provide a -I effect to the other two rings. Since the -I effect on the central ring is stronger at the position para to the $\ce{CF3}$ group than at the position meta, the ring with positions 1, 2, and 6 will be more deactivated than the ring with positions 3, 4, and 5. 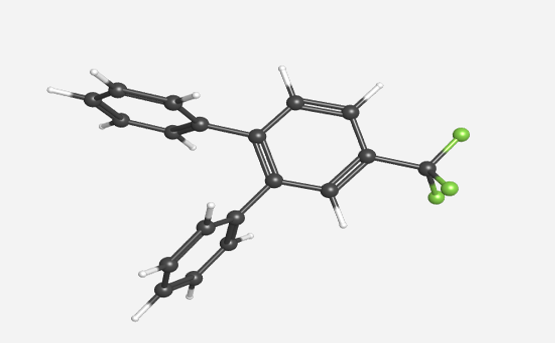 Since the lower ring is experiencing a -I effect, electrophilic attack at meta is most likely, so position 4 is the true correct answer.

In this question, we need to find the most electron-rich carbon out of positions $1,2,3,4,5,6$ in the compound given below: 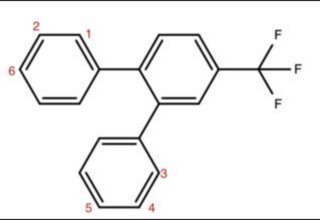 We proceed using the process of elimination.

Note: Not sure how scientific this is, however an attempt I made in finding the effect of the inductive effect was to run a DFT B3LYP/3-21 G on trifluoromethylbenzene. The result showed the m-carbon to have a charge of $-0.173$ and the p-carbon had a charge of $-0.172$. The original value in the benzene molecule is $-0.180$ and so inductive effect is present due to $\ce{-CF3}$. This meant that the m-carbon was more electron rich compared to the p-carbon. I do not have a reason for this however.

We reject positions $1,2,6$ since as stated above the meta-carbon is more electron rich than the para-carbon.

Due to the two eliminations made, we can say that position $4$ would be the most electron rich carbon and so the most likely to be attacked by an electrophile. 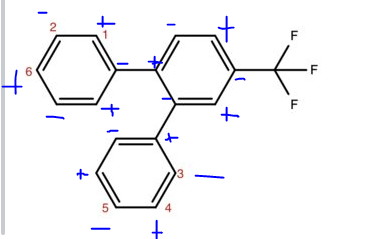 $\ce{CF3}$ loves to pull electrons, hence it is easier to polarize the molecule in this way (which is inaccurate because you cannot polarize it completely, but considering partial effects). This polarized structure is made considering the requirement of negative charge at the carbon positioned adjacent to CF3.

Your reason is apparently wrong because you considered an attack first and stabilised the product of your attack. 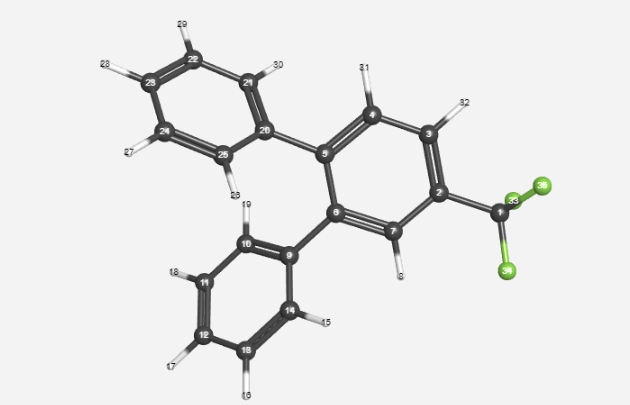 Optimised geometry{tinker:force field mm3} Then exported as xyz form and performed Hartree Fock using TeraChem, the following conclusions were made after the chat in comments.

Not the answer you're looking for? Browse other questions tagged organic-chemistry reaction-mechanism aromatic-compounds halides nitro-compounds or ask your own question.

6
Most activated position for Electrophilic addition in substituted biphenyls
2
Is a Methoxy group meta directing in this problem?
6
Does rearrangement take place in the reaction between ethenylcyclohexane and iodine chloride?