Can you steam clean your range hood, by adding dishwashing liquid to boiling distilled water?

My grandparents physically can't remove their Sakura R-727II range hood that lacks any filter. Because of COVID-19, no handyperson can visit their house. But their range hood is now clogged and failing to suck out fumes, so they must de-grease their range hood's interior that hasn't been cleaned in 4 years. 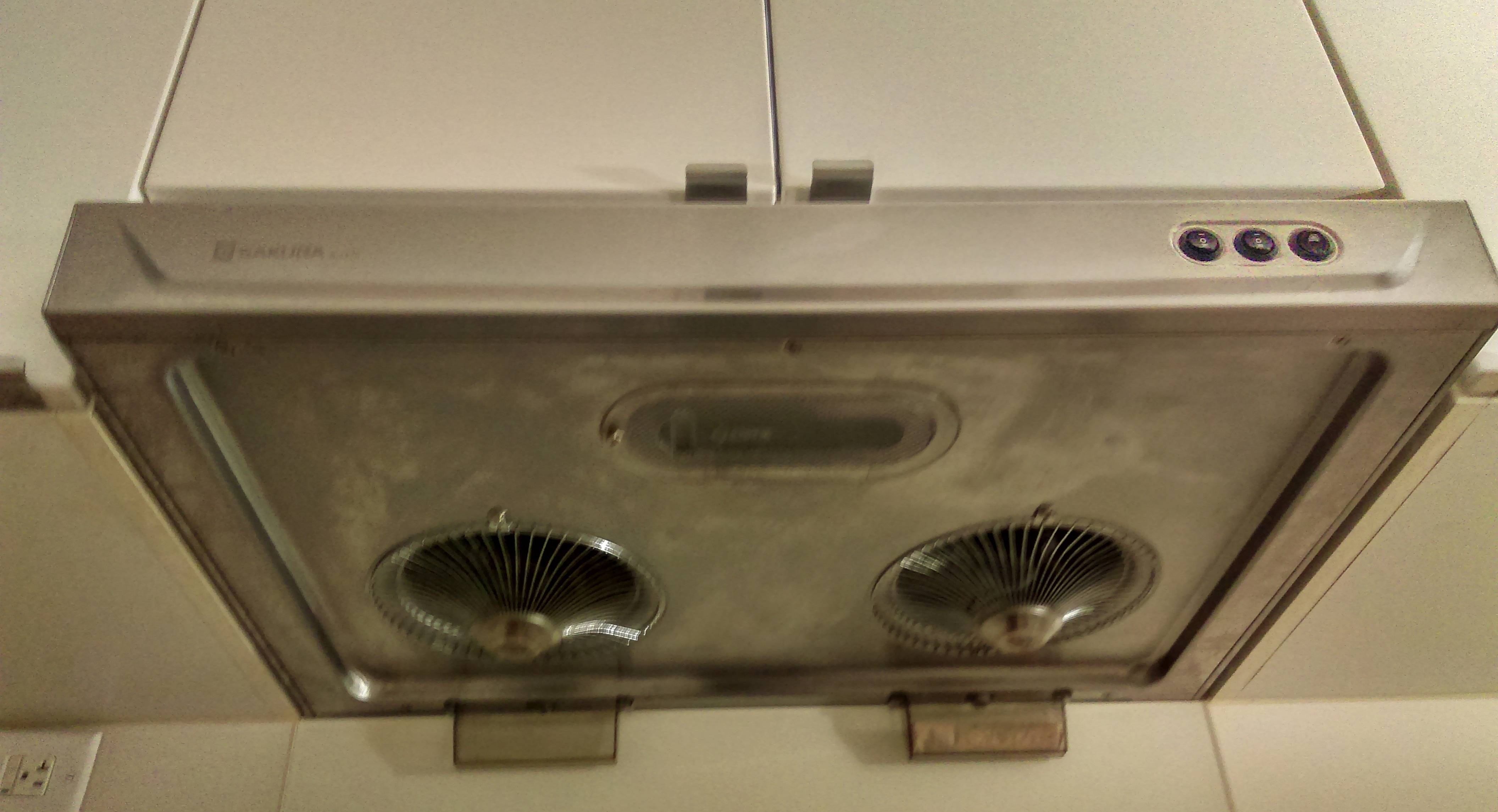 The two pictures above are like their range hood. Theirs isn't a Samsung range hood pictured below, but I used it to devise my collage for it shows steam. 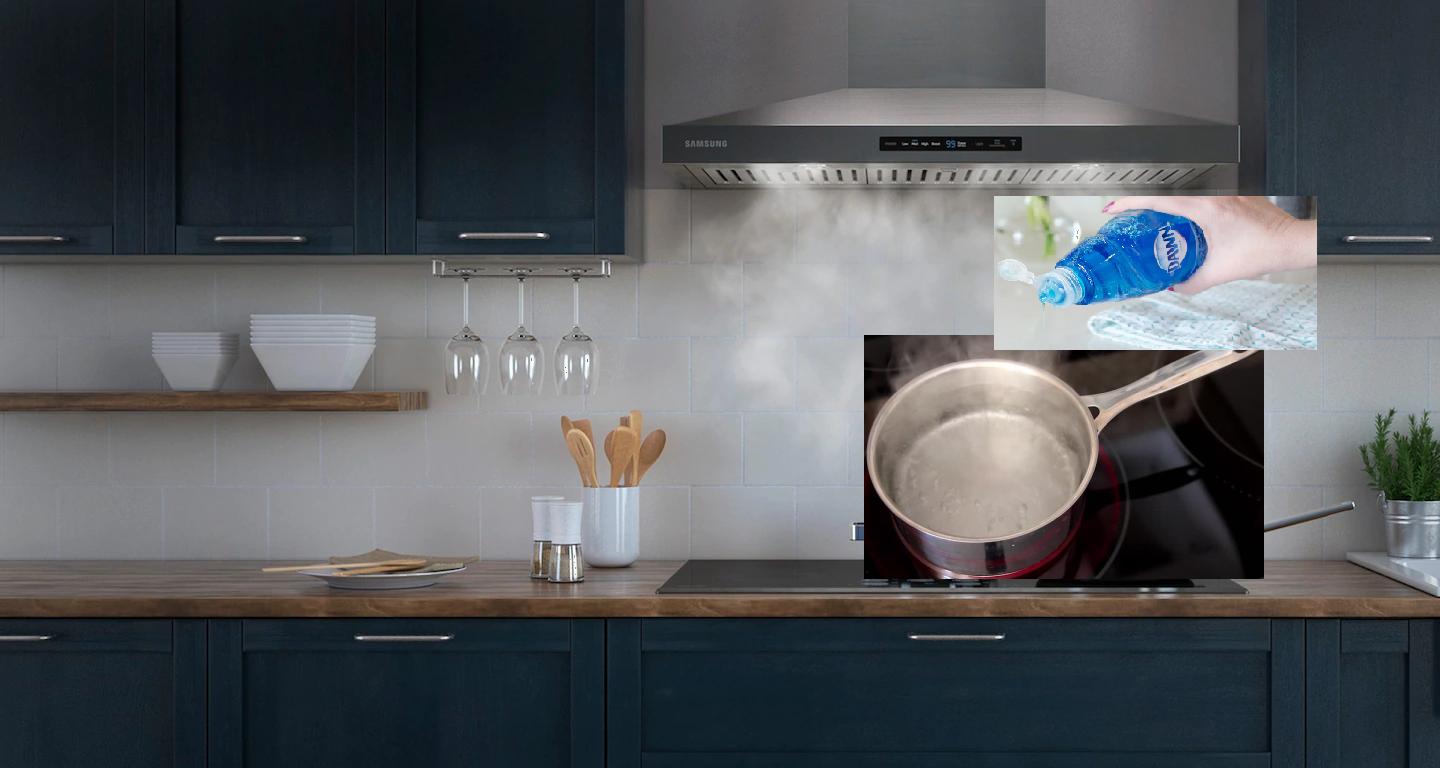 Clogged? Failing to suck out fumes? Quantitatively, how bad is it? And in what manner did this situation arise? Slowly, over time? Or suddenly? Can you hear a fan running?

Grease has a high boiling point, and while it is theoretically possible to clog some fine filter, it is doubtful that 4 years of home cooking could stop a hood fan from operating. In commercial practice, hoods over grills are cleaned frequently from spattered grease, not so much for better air flow, but more for sanitation and prevention of possible fires from leaping flames.

If no filter is accessible from the stove end, perhaps the exit end is the cause for blockage. Exit openings frequently have flaps to prevent rain entry. Two possibilities: 1) the flap is stuck down and hinders airflow, or 2) the flap is stuck up and the tube is blocked by a bird nest or a pile of acorns. (Of course, this exit end will be so high that it is not accessible for cleaning, but that's another problem.)

There is a third situation. In my former house, the builders omitted an outdoor exit pipe for the microwave and fume hood. There was simply a fan which sucked the steam/vapor up off the stove, thru the filter and back at the cook. We generally turned the fan off. The idea of a fume hood was nice, but not really necessary.

Any time a piece of equipment goes down, you cannot get a repair person, and you are not sure what to do, try to call or email the manufacturer. This is the US contact information for Sakura. They know their product better than anyone on this site and will probably know about common issues.

Have you ever seen the mess dish liquid makes when put in a dishwasher? The results of what is suggested more likely transport the soap all over the counter-tops instead of to the grease.

First off, let's clarify something:

When you boil water in a pot, hoping to carry whatever is dissolved within the pot in the steam, that thing should have a lower or the same boiling point as water (100 ℃).

As grease and other fats gets carried up into the hood it usually cools down and the polymerizes and gets denser and harder to remove. You could, however, heat up the grease and fats again by using either a steam-cleaner or boiling some water very close to the hood for a couple of hours. The heat will "soften" up the grease thus leading it to eventually loosen the hood. (ONLY TURN ON THE HOOD ON THE LOWEST SETTING TO GUIDE THE VAPOR INTO THE GREASE - A higher setting will suck the grease further into the hood).

When the heating is done, you should be able to remove the hood fairly easily without the grease holding anything into place as it is more or less "melted".

There is a way to achieve a result strictly within the bounds of your question, but it's just as insane as these bounds.
Boil a solvent, not dishwashing liquid.
Say, gasoline. Or much better dichloromethane (sold as paint remover), if there is not much plastic at the kitchen.
Don't turn fans on. Hood must act like reflux condenser. Let dichloromethane fumes condense inside, flow through it and drip.

Needless to say, it's a way to turn the kitchen into hell and is completely insane for health and fire danger :)

7
Distilled water to clean greasy stains: Why does that work?
3
Can you fix rubber on a handle after it has all but turned into a liquid?
0
What liquid other than water that is safe to put on your skin will provide the most evaporative cooling?
4
Can Aquatabs be used to clean swimming pool water?
16
Why does adding salt to boiling water cause it to flare up suddenly?